Instead of this column’s usual anti-stance, I decided to write today in favor of something: welcome back, collective action!

You may have heard about the march organised by the German art collective Zentrum für Politische Schönheit (Center For Political Beauty) as part of their art action “Die Toten kommen” (Death arrives). The march, called “Marsch der Entschlossenen” (March of the Determined), was supposed to finish right in front of the Bundeskanzleramt (The House of the Chancellor) last Sunday, but as this was forbidden, they walked up to the Deutschen Bundestag (The House of Parlament) instead.

I was initially a little uncertain what to think of this art action; their stated goal was to exhume the bodies of dead refugees who died on the borders of the European Union and transport them all the way from South Europe to Berlin – assuming art is still the right way to describe such an action?
I guess what I took away from it is that the Zentrum für Politische Schönheit managed to achieve something committed, thoughtful and dramatic. They had in fact successfully highlighted a difficult issue: the unbearable deaths of so many and the degrading way those deaths are being handled by European capitals.

The “Marsch der Entschlossenen” then was a march into the living rooms of Germans and all other Europeans. The more than 100 graves they created on the lawn in front of the Bundestag were an unmissable act – and a challenge to European governments’ to improve their handling of the refugee crisis.
But their action was bigger than that, it was a reminder that everybody has to get involved, articulate and publicise their opinions if change is going to come. Politics is a blunt instrument, so make your impact, straight and simple.

So let’s not get hung up on whether this is a true artistic statement. But is it pretty anger-inducing that it seems to be only by calling it art can attention be raised without everyone getting into trouble with the police or getting arrested for civil disobedience.
For this was not an act of civil disobedience at all. Rather this was a public articulation by thoughtful people with a view to share, and we all should be thankful to the Zentrum für Politische Kunst for their efforts.
Because looking at the headlines in German newspapers like Bild after the “art event”: “Several thousand Euros Damage! – Demonstrators destroy the Reichstag green!”), you realise we’re still a long way from the enlightenment and sense of common purpose needed to solve this, and many other, crises. 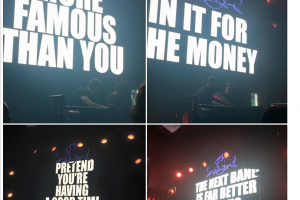 A few days ago, the wonderfully sarcastic Trevor Jackson, reported from his booking at Sónar Copenh…

Somedays words just misbehave. That idea that felt so urgent and relevant during the first coffee en…