In the old days, everything was better – (okay, except no internet).
Today: OSAKA EXPO 1970

We can understand our past by gazing in surprise at the futures we once held dear. And it turns out the future ended back in the year 2000. I miss the future.

In 1900 humanity began to project their utopian ideas and visions on the myth-enshrouded year 2000. The turn of the next century! Imagine! And the dawn of the „space age“ in the mid-century only intensified the hunger for that future. It was never a rosy idea, but at least the future would look cool: flying cars, talking androids, one-piece utility suits. As a child I believed in all of this and I thought this was properly futuristic. (Maybe this kind of future died with the Challenger shuttle in 1986?)

But the futures we indulge in today have turned out to rather lack any distinctive image. The storyline has got a lot more pragmatic and more and a tad more Protestant. I’m not really digging it if I’m honest.

When the year 2000 finally rolled around after 100 years of anticipation it proved a shitty disappointment. And since then things have got worse. While economics, communication, terrorism and refugee flows have been globalised, for individuals freedom has turned out to be a race to get the same houses, the same looks and the same jobs. I dont´t exaggerate. Everything tends to the middle, to sameness. Maybe the future has been put off for a bit? To 2055 or so?

Under these circumstances you wouldn’t be surprised if an “expo exhibition” is a more sorrowful faced beast these days. You don’t find the Utopian exhibits about a glittering life-of-tomorrow, inspiring messages of the world we’ll all live in, just round the corner.
No, these days a decent expo is a censorious classroom, where you must learn to be responsible and how to save what little of the world we haven’t already destroyed. Every single unit at such Expos is built from recycled milk cartons and heated with cow shit. Nothing wrong with that. But i miss the crazyness, the insanely visionary elements. We’ve replaced a shiny cinema screen of new ideas, with a wagging forefinger in some virtual room.

Ideas like „We’re gonna fly to the moon“, „In 30 years we will be able to talk to animals“ and „We gonna build houses which will walk or look like spaceships“. Sure, nobody needs this stuff – but these are the storylines where we fire up our imagination, and surely we need these to push things forward?

That said, let’s look at the festival plaza designed by Kenzo Tange. 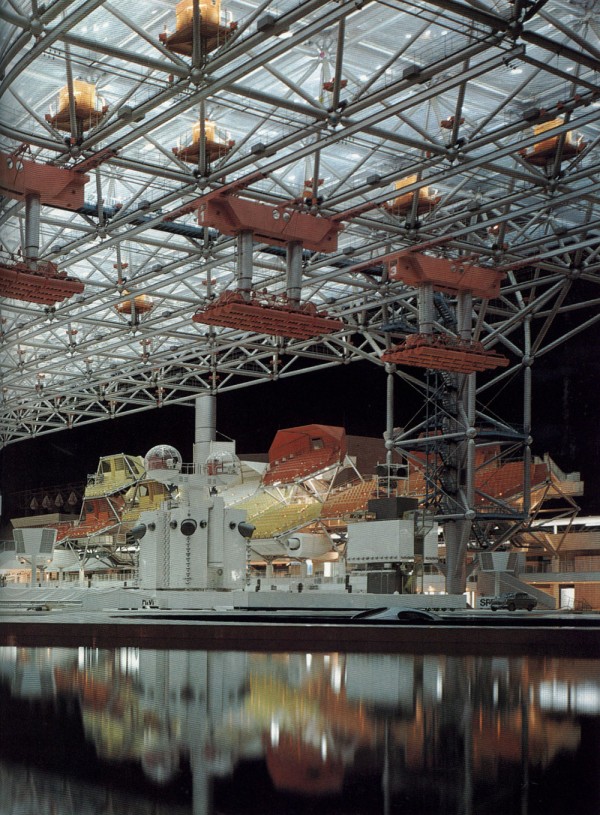 Here everything is screaming “future”. The year 2000 is everpresent. The 75×100 metre roof, propped by just six pillars, hovers over a multifunctional space, a artificial lake and tribunes. The roof was built on the floor and then raised 30 metres into the air. The so called „Tower of the Sun“ came out of this roof in a mix of high-tech and folklore (something the Japanese were well known for at that time) and once in position watches over the whole Expo like a God surveying the future of mankind. So crazy that I wanna jump in circles here. 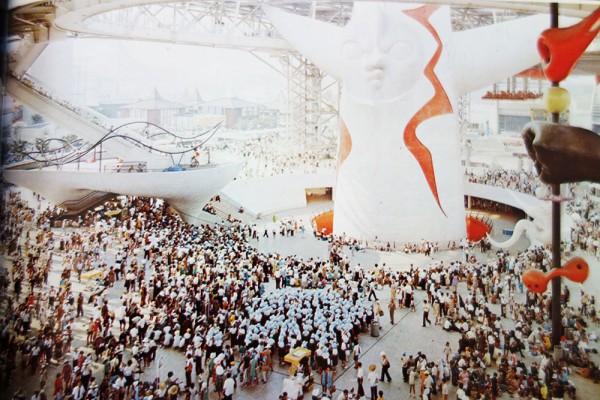 When people went inside this „Tower of the Sun“ they found a psychedelic land of sun. 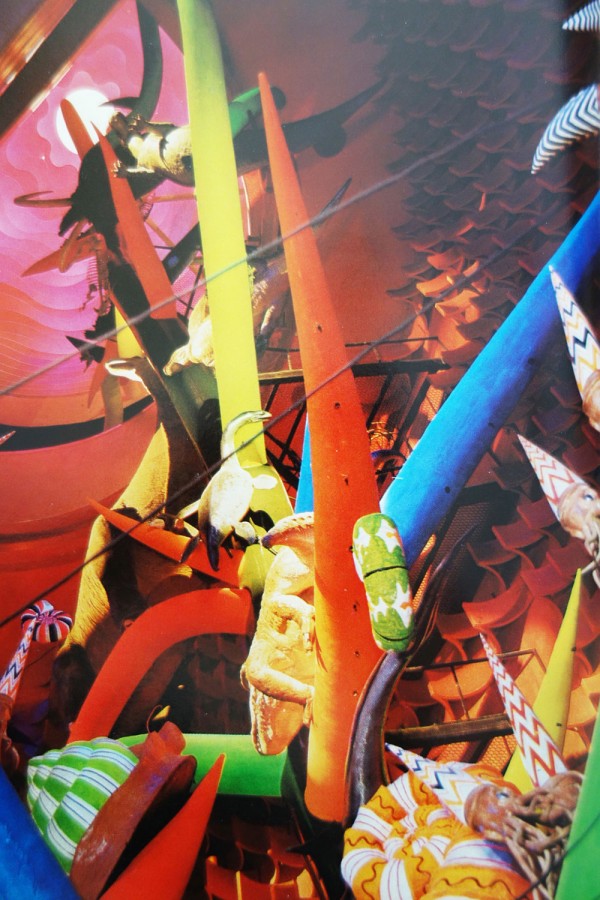 The lights on the roof of the Expo plaza were controlled remotely and able to change colors. Well, sure this kind of thing is now ubiquitous in blinking LEDs, but in my opinion they don’t look as good as back then.

Every single country of the 77 who took part were allowed to present itself for one day on the Festival’s main plaza. Let’s take a look at new Zealand:

And now we talk robots. 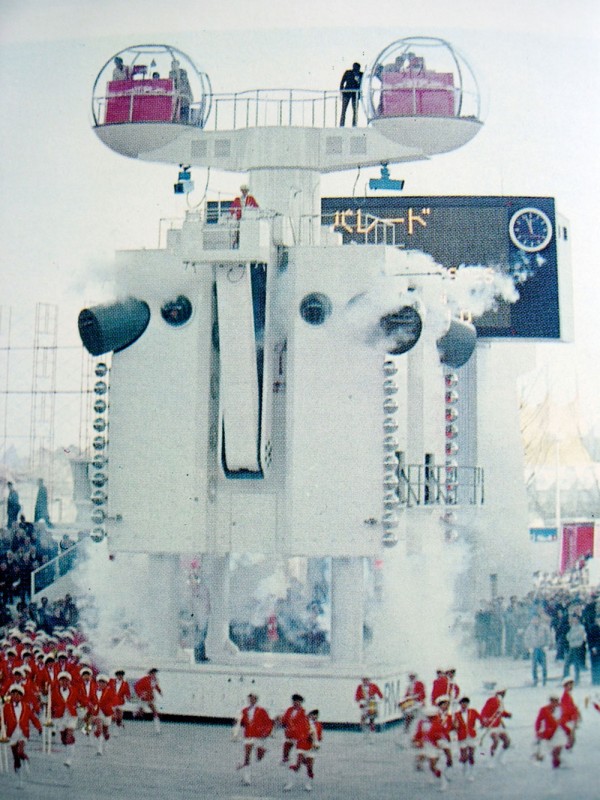 The architect and visionar Arata Isozaki came up with this fantastic metal monster. Handled by a few technicians, this robot was able to move his huge arms and blast out light effects, sound, smoke and other smells into the air, laying down some pretty gymnastic moves. When lying flat, the lower part of the robot was used as a mobile stage.
Here’s some more info on the giant. and you can see two brave men in control of the leviathan itself. Would have loved to interview these guys but they were too hard to track down.

But let’s keep on walking. There is so much to see. In this futuristic building they staged the fairytales of the world. 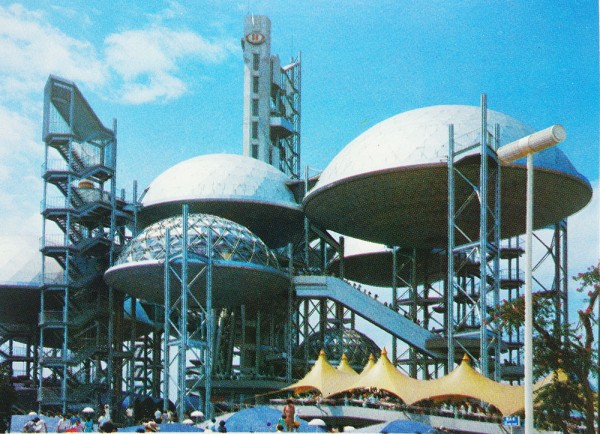 The architecture is very typical of the era, so beautiful and so friendly and so playful and human. 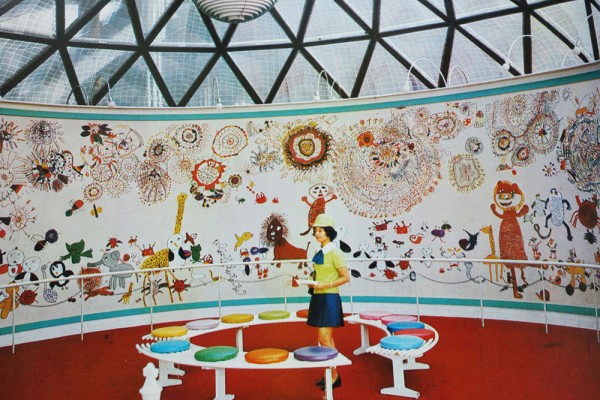 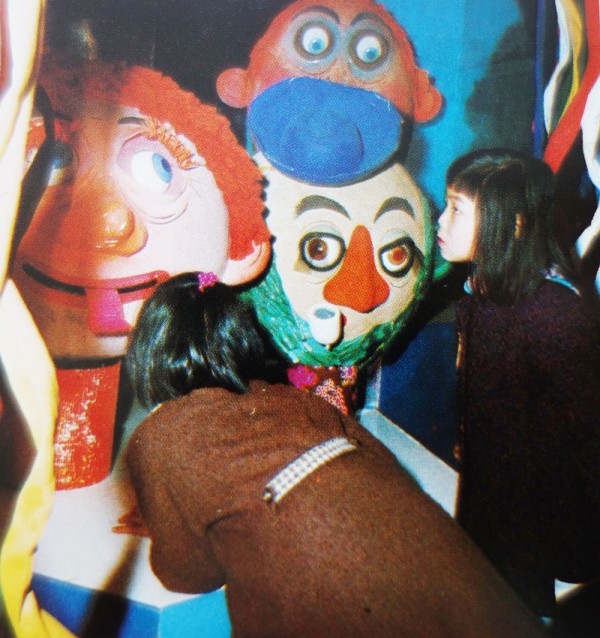 The beginning of the 1970s was, a balance of future-anxiety and heady optimism. Back then architecture and technology were still believed to be the keys to change the world for the better. There was no sign of the dulled pragmatism of our age. Instead a kind of high-tech avant-garde was evident in Japanese and European architecture – and if you look at the right people you still see these influences today.
I am so thankful that a few people keep the dream alive, as most architecture since the 90s is just horrible: boxes with slits, arrogant glass and steel emptinesses, or fake stone and needless curves.
But the real modernism was a 1970s speciality. Kisho Kurokawa, famous for his now sadly half-destroyed Nakagin Capsule Tower, designed „Takara Beautillion“ for the Expo 70: 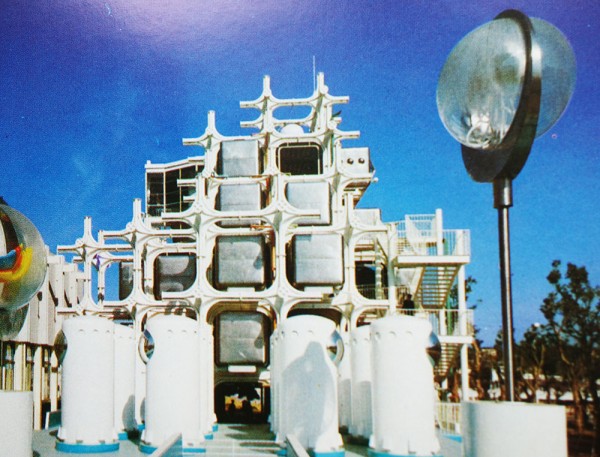 Kurokawa was the first of a wave of modular architects, trying to generate combined living/working spaces in an organic complex. Great – but like a lot of great things, it somehow never became the new paradigm.
But let´s take a look inside: 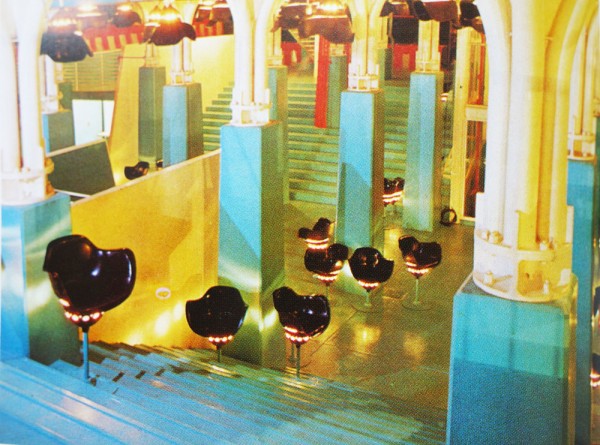 Again you see extreme high tech and traditional craft coming together. A logical move if you ask me. The biggest changes and the most futuristic visions often draw on traditional techniques and established aesthetics. Just saying: Renaissance and Arts & Crafts or „Sacre du Printemps“ by Stravinsky, Nijinsky and Roerichs, channel folk rites and ancient illustrated worlds into the magical shock of the new. Within Kurokawa’s spacecraft architecture you also find influences of
Ikebana and Kimonos: 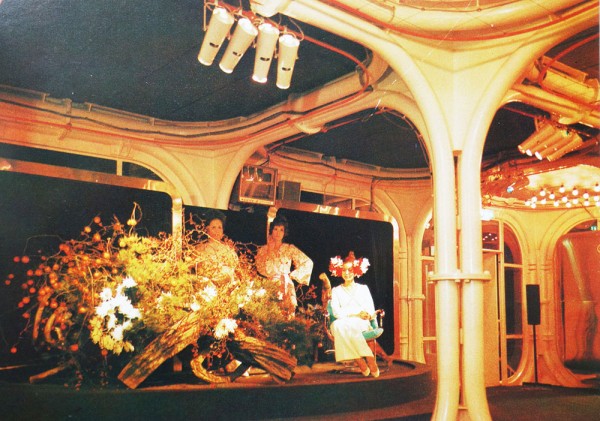 Kurokawa was constantly trying to capture the human body’s changing nature. If you look careful you see his modular, living spaces even within the roof of the Expo’s plaza. 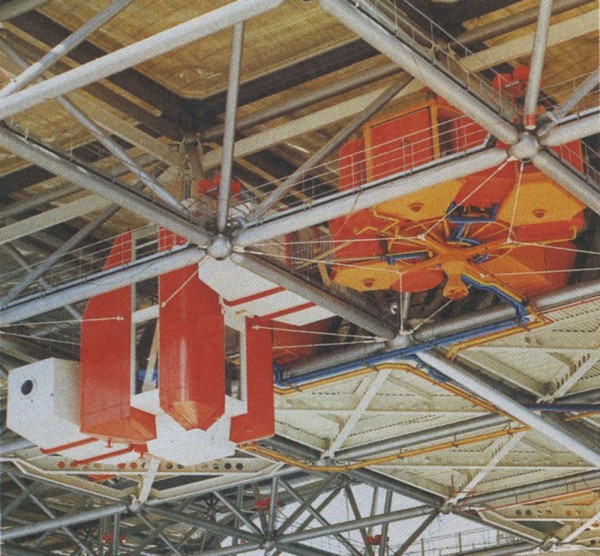 I can’t tell you how much I would love to live in a world like this, playing with the robots. A world people do still believe in, space travel and searching for new worlds – but at the same time children able to live it up in anti-authority activities and get all muddy with paint. Quite a vision.

From today’s perspective Expo 70 is the unreedemed promise of a futurstic world with humans who care and love each other and travel with long hair through the universe: free and global, high end technology and somehow at one with the universe. Robots, animals, plants, cyborgs, ghosts, all united.
I know it seems ridiculous to get nostalgic over this now ancient image. So instead of this promised land we got the internet and smartphones – not too shabby admittedly (as we can’t imagine living without them) but still there is this desire for all those things I dreamt of as a child.
There is one episode of the anime series „Crayon Shin-chan: The Adult Empire“ set in a 1:1 rebuild of the Expo 70 – in which the aroma of nostalgia seduces adults into a dictatorship where they must behave as children. Perhaps a fitting Japanese homage to the last Expo transporting the idea of utopia!

The Pepsi pavilion was also utopian. It was brought to life by the 1967 group E.A.T. (Experiments in Art and Technology) – founding members were Billy Klüver (who coproduced Tinguely’s self-destroying machine „Homage to New York“ and Andy Warhol’s „Silver Clouds“), Fred Waldhauer, Robert Whitman (famous for his multimedia theater experiment „9 Evenings, Theatre and Engineering“) and one Robert Rauschenberg. I drop all of them as they were the first to bring a multimedia approach in the world of art and in this joining art and science. Together with 75 artists and ingeneers E.A.T designed a pavillon in permanent water vapour, with the effect that the geodesic structure was all swirling. Here are some videos:

It was possibly a sign of the times that there were so many swirling and floating things at this Expo, from artificial waterfalls to foam-mountain machines producing tunnels full of foam. Make of that what you will. 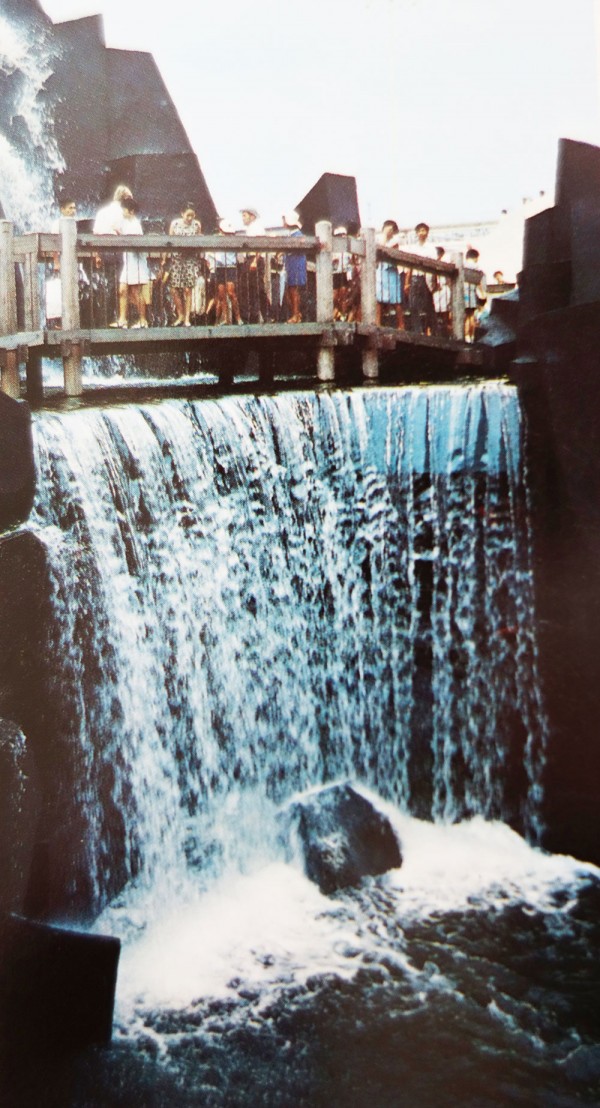 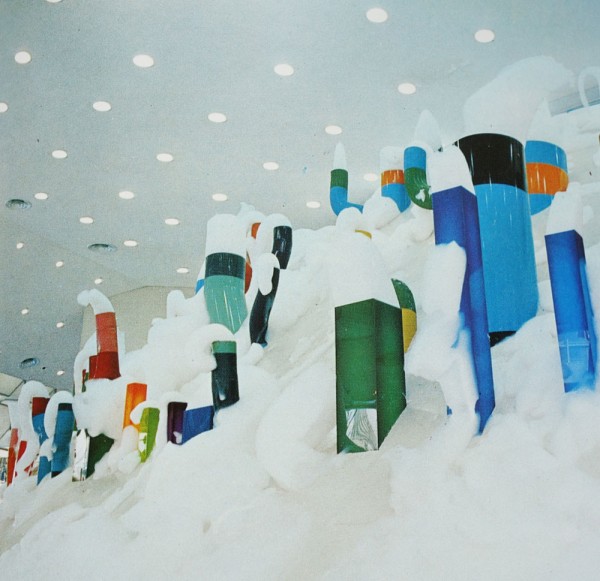 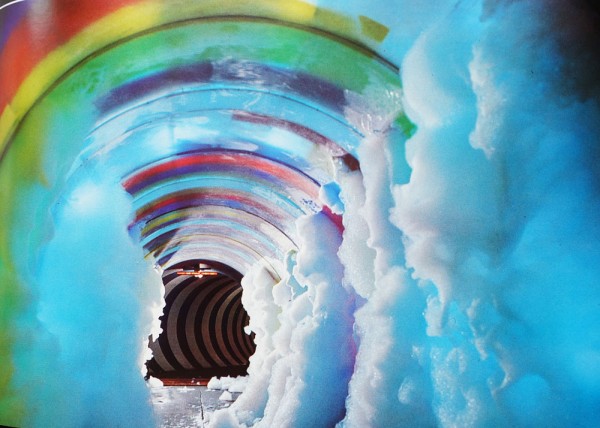 The idea of inner space and the search for the soul were also 70s concerns. For example in „Land of one’s self“, which made nods to the impossible designs of M.C. Escher: 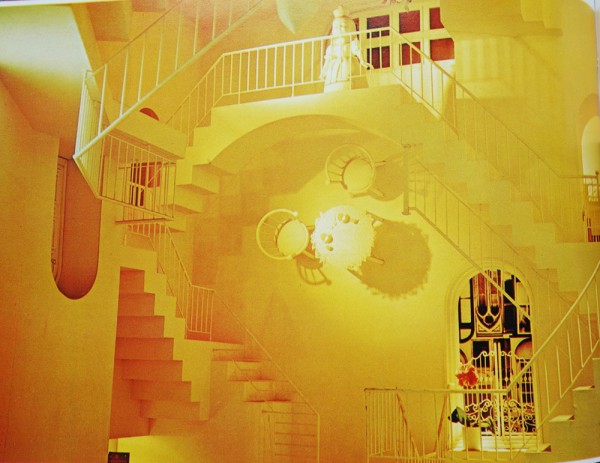 Within the German pavillon you could start a journey into inner space. Under the dome you’d find a world of sound and feeling. The „Gardens of Music“ were created by Karl Heinz Stockhausen. Yes: Stockhausen at the Expo! There were speakers all around the audience broadcasting 5 and a half hours of specially written Stockhausen compositions, 183 days every day. Newspapers from the period assert that this pavillon was a big magnet for the visitors. A beautiful island of silence within the noisy world of attractions. 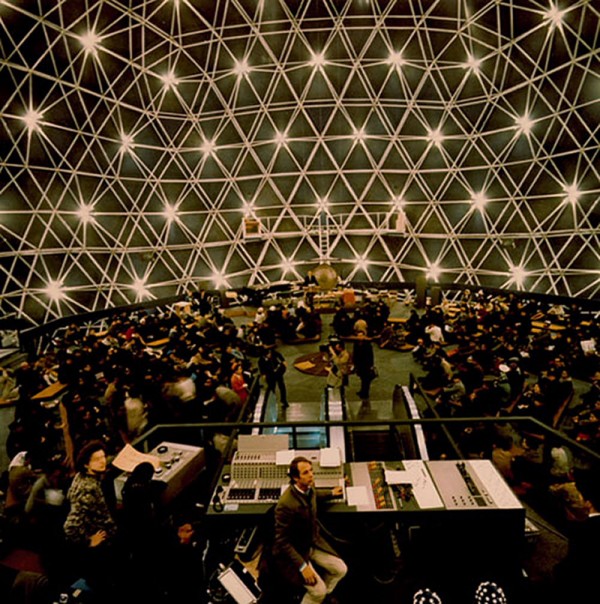 The photo of the dome style concert room is well known. In my historic guidebook to the Expo (bought for much too much money on Ebay) I also found this less well-known one showing the „Gardens of Music“ as the inside of a brain. 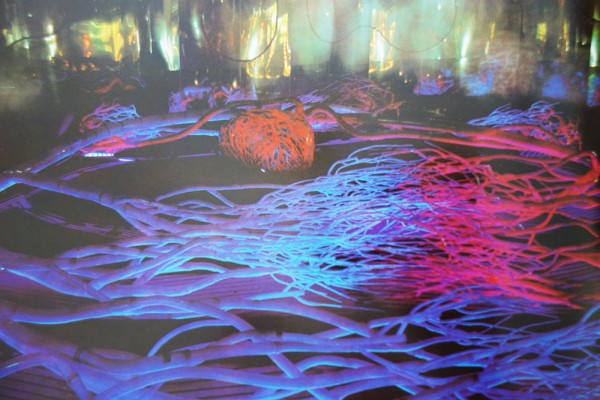 Music, dance and art were all central to the Expo. Every night there were performances from different countries on the Expo’s main plaza. Too bad that there is not so much footage of these. I demand a
10 disc DVD Box „Shows on the Festival Plaza of Expo 70“, now!
Alone this five level ship would be worth every penny: 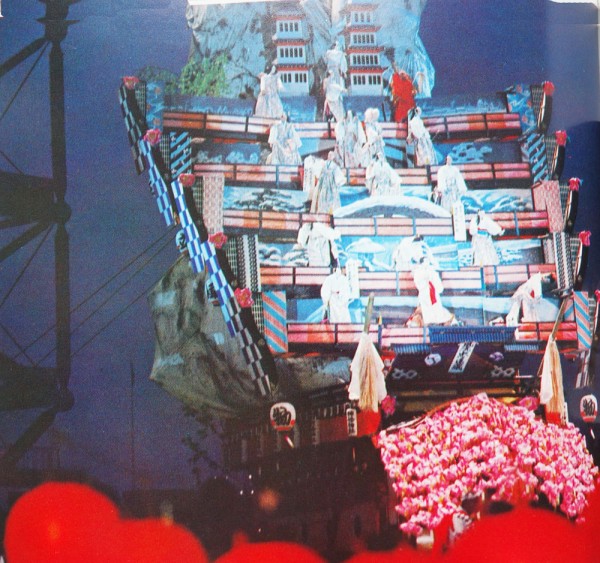 Here you see the crowning of Miss Universe. Let us never forget, television was so much better back in the day.

In 1970 Franz West wasn’t yet producing art. But somehow, someone felt his spirit: 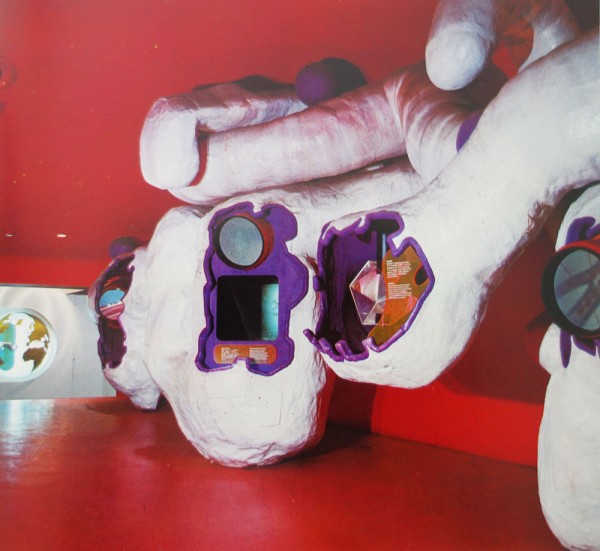 Paul McCarthy would have loved that varied blow-up-architecture. This one is not so far from a butt plug: 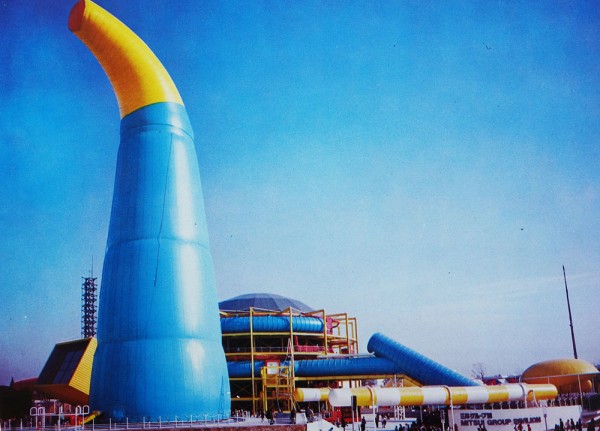 And the huge blow-up-hall of Fuji (in the background) reminds one of the suggestive works of McCarthy: 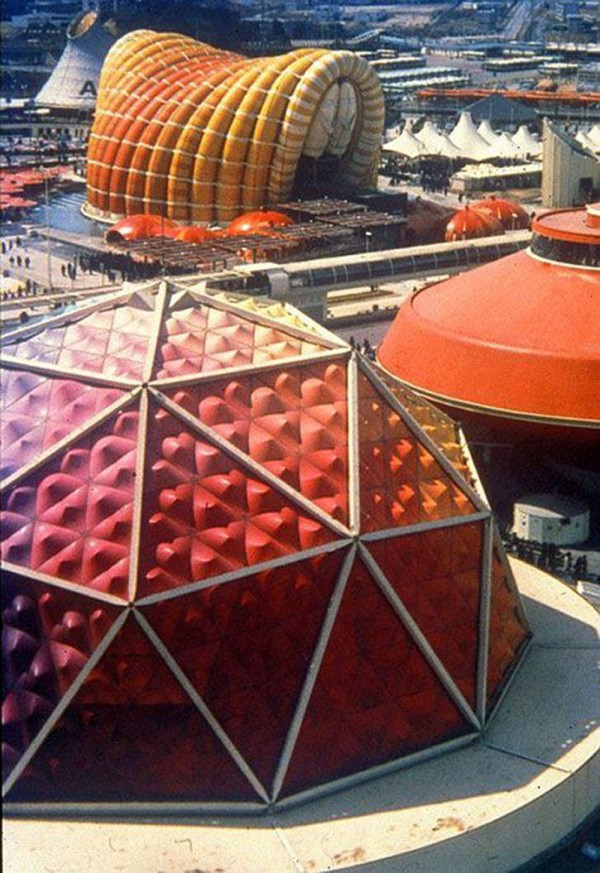 And so on and so on. One of my favorite spaces is the interior of the Canadian pavillon. It looks like an early work of Jonathan Meese-Arbeit, just with more and better mirrors. 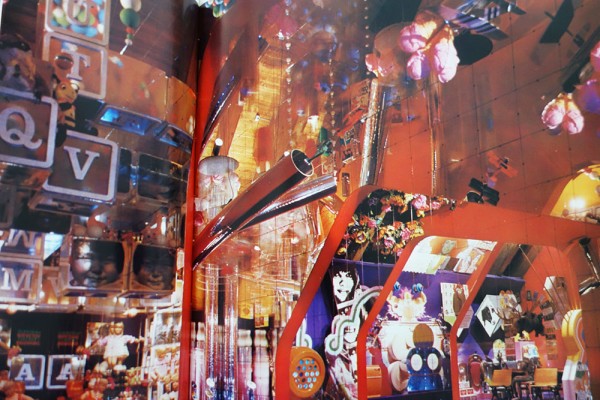 Also the outside of the Canadian pavillon was pretty groovy. The mirror-pillars reminds of Isa Genzken – and there were coloured centrifugals on the top and a watery stage for dancing. 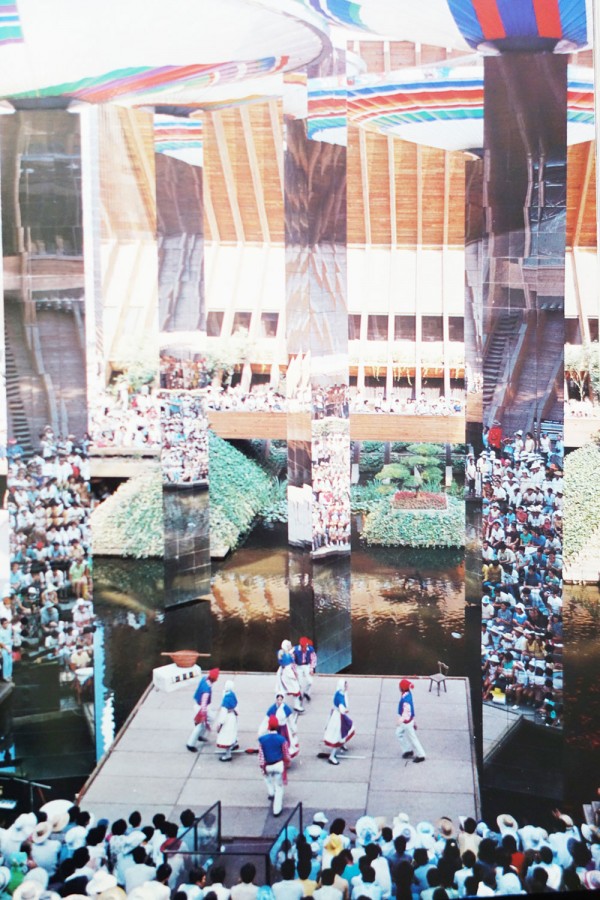 And so on and so an. Every single one of the 77 pavillions look amazing in my book. This was one of the biggest and most frequented Expos of all time. And I continually kick myself that I was born in 1971 and do not (yet) have a time machine. On the plus side, we’re got the internet and are able to at least read all about it and maybe channel some of that free-wheeling creativity and heartfelt utopianism here in 2015.

But the world exhibitions, the Expos, were definitely better back then. As I am already in the writing mood, follow me to Paris and the year 1900, as I’ve also written about that one (HERE at the artblogcologne in german).
But as the other article is as long, maybe brew a coffee before.

It’s a bit like in horror movies. Nobody knows when “it” arrived, but now it’s everywhere...…

Well, it’s a few days since I returned from Primavera Festival 2015, and as always after such an i…

And now, to keep up with the world of all the things, let’s see what Facebook reckons I really oug…