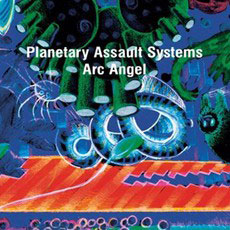 “More than life/
Interested me so /
That I dared to knock/
At the door of the cosmos.”
(Sun Ra, “Door of the Cosmos”)

There is a handful of musicians who might be regarded as the founders of a futurism on the basis of techno. Next to musicians like Juan Atkins, Jeff Mills or A Guy Called Gerald, Luke Slater (aka Planetary Assault System) has to be added as well. The musician from England started dealing with electronic music in the late 80s. Under various alias he has been releasing records, characterized by an atmosphere of departure: into the future, into the cosmos, to other planets.

The triple LP “Arc Angel” is, up to now, the most consistent translation of this escape from planet earth, we have ever heard from Luke Slater. While the metaphysical symbol of the arc angle misdirects at first, by referencing an earthly-spiritual cultural key, it is supposed to be rad as a carrier of a non-earthbound vision. “Arc Angel” is nothing else than the name of a ship that takes us to the interstellar spaces beyond our solar system. Because only where the story of humankind can be defined anew, freedom can be found.

This doesn’t sound hippie-like for nothing; even Timothy Leary, as founder of the SMI²LE-program, was aware that the future of humankind will be tied to a SPACE MIGRATION. Not just the scarcity of resources, but also the insurmountable trenches dug by history, together with the great languages games, let earth become more and more barren. An upcoming society has to look for its happiness in the cosmos.

Next to shimmering nebulae, black holes or dancing binary stars, various other sonorous experiences are waiting to be experienced by the listeners. Not unlike Jeff Miss meteor showers, the arrival of which is oftentimes accompanied by bells, are approaching you, pushed through 808 and 909; Or melody fragments that indicate piano lines; Or bleeps and twirps that resonate through the complete ship.

Not without good reason one could note, that the nothing, that everything actually exists from, which we call outer space, is not a carrier of sound. It rather is an never ending silence. Slater is aware of this problem and knows how to see it as a challenge. Therefore the first track “Cassette” already indicates that it isn’t a stellar field recording notwithstanding the space theme. Additionally, the cover shows a world full of psychedelic elements (back to Leary), that rather resembles the existing ocean floor, than another planet. That a technoid futurism can be actualized under water has already been shown by Drexciya. And it should be assumed that everyone knows that water functions as an excellent propagator of sound waves.

It’s free to our imagination to guess where the “Arc Angel”, if we surmise it’s ship-ness, swims, hovers or floats. One thing is sure: This journey of one and a half hours carries us forward. Maybe it carries us a million light years, but maybe it just carries us to the next dance floor.

Phoenix do of course know that they are not the band for explicit political statements, that people …