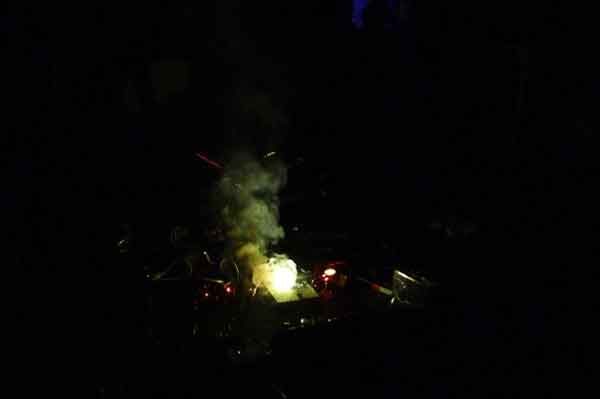 Even regular visitors of Reihe M, the long going concert series at Stadtgarten, Cologne, might be surprised of the performative settings they will experience on 22th of February. Martin Howse (with “The Final Session [001]”) and Bernd Schurer (with “Lautaggregat Redux (Quadraphonische Version)” are up to challenge our coordinate systems in some way and another.

Martin, Bernd, you gonna perform as part of the reiheM concert series. Just another gig for you or a special occasion?
Martin Howse: For me, this will be a quite special evening as it’s the first time I perform with new elements, particularly smoke and burning materials, and under the heading of “The Final Session”. I’ve been working quite hard recently to improve the precision of sensing elements within the piece. Hopefully this will be the first of many final sessions!
Bernd Schurer: I hope it will be a unique experience. I’m not much of a concert person, because I appreciate the possibility of experiencing a piece from many different (hearing) perspectives. So I prefer more to use space and time in installation-like settings, relative to each other. This gives the listener more freedom of choice and ultimately they construct their own “drama”. Maybe also in a (post)–Cageian sense, like disrupted seating arrangements to introduce incomplete perspectives. In part, this is due to the inherent properties of sound, something that transgresses borders and fills space – each ear hears it differently.
I presented work some time ago at Stadtgarten in Cologne. I love the curatorial aspect of reiheM, as it seems to me, a lot of care is going into it.

Martin, you just mentioned it, the title of the performance is “The Final Session [001]”. I like the contradiction of final and the starting enumeration.
Martin Howse: So this is the first prototype or tending, scratching towards what could be a Final Session. It never approaches this end, like the writing of Samuel Beckett. The title comes from playing with the texts of Ancient Greek and Egyptian spells and invocations. 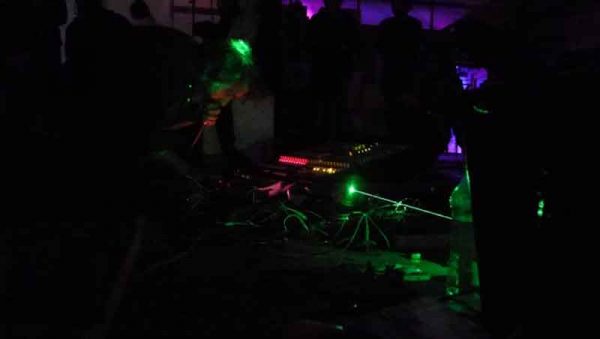 Martin, for someone who did not see you perform yet, the announcement sounds rather like a setting of an chemical experiment than a concert:
“a performance for electronics, burning matter, temperature sensors, violet-laser and minerals. Exhalations, steam and fumes of industrial plants, fragrances of rotting snakes and burning forests, cutting sounds and penetrating colors.”
How do we have to imagine the stage set up?
Martin Howse: The setup will be quite close to this description, with the exception of any snakes. I’m interested here in working precisely with burningglass, wood, tree saps incorporated and disturbed by industrial elements, and human breath. The setup is quite dark, and on the borders of precise experiment and collapsing edifice.

Where do you situate yourself with this performance?
Martin Howse: The title comes directly from the study of Ancient Greek magical invocation which is involved with summoning and divination of the headless god which I identify with contemporary technology. I started working on elements of this performance during last year’s Tuned City festival, which was held on an ancient Greek archaeological site. There I was looking at temperature changes in stone and translating these into smoke signals. The scientific informed the magical, the invocation of visions and dreams. 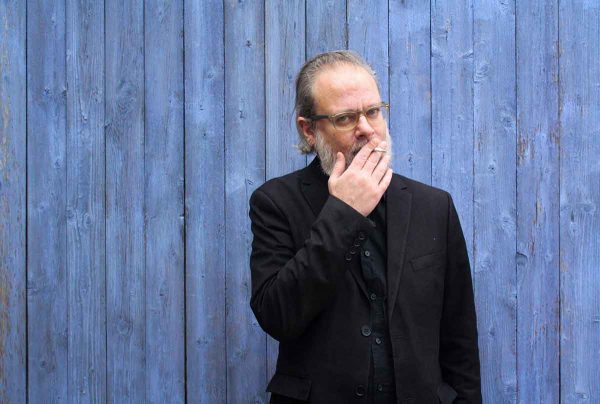 Bernd, “Lautaggregat Redux”, the piece you gonna perform at Stadtgarten, is a resynthetisation of parts of the airplay „Lautaggregat by Carlfriedrich Claus. How did this idea grow in you? What did appeal you? How did you proceed?
Bernd Schurer: This is an amazing work and I just simply love it. My friend Daniel Löwenbrück (founder of Tochnit Aleph, artist and curator and shop owner of Rumpsti Pumsti, where I have my studio at) introduced me more closely to the work of Carlfriedrich Claus and I was fascinated ever since by this vastly rich cosmos. Having a deep interest in symbolic structures and language, it was clear to me that one day I would focus on the possibility to synthesize something from it.
My piece however doesn’t use sound materials directly. It’s more informed by methods and experiments on the original Lautaggregat, a process piece or a resynthesis in any possible way.
Through the waveset-decomposition-algorithm in my piece (Trevor Wishart), for example, which works purely in a technical way, every element separates from every other element. So what is an event? Is it in the grain? What is a “Laut”? How could it aggregate and amalgam? It’s a redux, it brings back ideas. Like language. And this is where my interest in the phenomenology of sound is rooted in – perceptual auditory examination of perspectives at the level of micro-events and also on the larger plateau in/of the meta scale to create artistic abstraction.

Bernd, to which degree are concrete and phonetic poetry dialogue partners for you?
Bernd Schurer: This is a good question and I’m not able to give a short synopsis here.
They are incomplete, non-integratable but inseparable. This is maybe why you have to do these “Exerzitien” (as in Carlfriedrich Claus) and find out, if something fuses (or not). Like I sort of do by synthezising and experimenting with sound and its “meaning”. The dialogue could become very broad or very tiny. 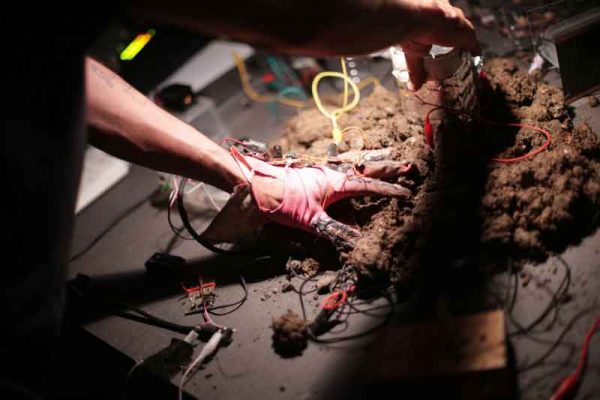 Martin, do you see yourself in a certain artistic tradition? Do you have role models?
Martin Howse: I relate to traditions of (particularly English) psychogeography, and auto-destructive art: the films of Derek Jarman and the work of Gustav Metzger. Not so much in sound. I love the work of Suzanne Treister which intersects a lot of my interests in alchemy, science, technology and magic.

Do you two think that your audience does see and hear the same thing during your performance?
Martin Howse: I don’t think so.
Bernd Schurer: How can I know?

To come to an end here: Martin, Bernd, where are the most challenging things in art happening for you right now?
Martin Howse: A lot of what interests me is from a while back. Recently as part of CTM in Berlin, the work of Rie Nakajima (in the exhibition) was perfect, the voice of Rully Shabara in one concert alongside Berlin musicians such as Marta Zaparolli was also exceptional.
Bernd Schurer:  Too many really to just name a few. Some things I liked recently:
– Florian Hecker: “Synopsis in Glasgow”
– Thomas Ankersmit’s piece inspired by Maryanne Amacher at CTM Berlin
– The Act of Seeing With One’s Own Eyes
– Stan Brakhage & David Kamp
– “EYES WIDE OPEN”
– “100 YEARS OF LEICA PHOTOGRAPHY” at C/O BERLIN

Thanks for your time, Martin, Bernd. Looking forward to see your performance.

Martin Howse (with “The Final Session [001]”) and Bernd Schurer (with “Lautaggregat Redux (Quadraphonische Version)” are going to perform on 22. of February at Stadtgarten, Cologne. 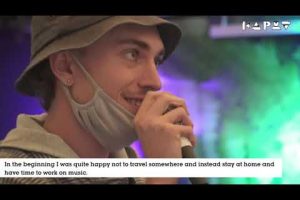 Jondo in interview (with the two kaput founders Linus Volkmann and Thomas Venker) and live. Recorded… 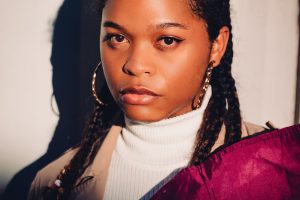 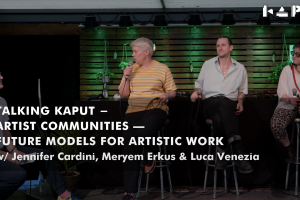 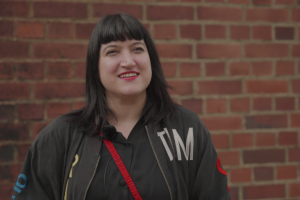 She is the entrepreneur of our hearts. The city of Cologne without Meryem? Boy, this would be some k…