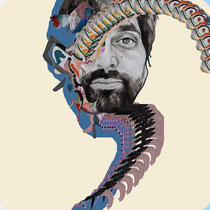 While I took to complaining about the lack of action on Jochen Distelmeyer’s album of covers in last week’s review, this week, there is almost a bit too much going on for me on “Painting With” by Animal Collective … but that might well just be because it is winter and I am not feeling quite as up to it as I would usually be.

Actually, we really ought to be thankful that Dave Portner/Avey Tare, Noah Lennox/Panda Bear, Brian “Geologist” Weitz and Josh “Deakin” Dibb come crashing into the dull month that is February like a Mardi-gras-marching-band. Even though the collective are originally from New York, on their eleventh album they at times come across like a twisted version of the Beach Boys. Or like people of the Stone age, whose stone circles Animal collective name as important influences for “Painting With” – among others, like Ramones or early songs by the Beatles. And above all: Art! Paintings! Dada, Cubism! Not an entirely new approach for Animal Collective: when they recorded “Strawberry Jam” about ten years ago, they wanted to change their name to The Painters, which thankfully, they ended up not doing.

However, the universal artistic idea remained, as Animal Collective’s twisted multi-layered tracks are much closer to the notions of cubism than they are to the spirit of rock’n’roll. “Painting With” represents another approach: simplification. Minimalism. 3-minute-songs. At least that was how it was intended and Animal Collective will not in a hundred years’ time sound as wound-down as, let’s say, Jochen Distelmeyer on “From the Bottom”. Those who put up little paddling ponds with candles and water lilies around the studio to get themselves “into the zone”, have forever got the heart of a panda bear – or something like that. You know what I mean. The songs are in fact a little shorter, if merely pure formalities are being considered, but they are in no way less “colourful”. Polyrhythmical, playful and as gifted as usually, paradoxical and harmonic at once; nostalgic Sixties-harmonies and elements of progressive music meet exalted rave (“Burglars”), Avey Tare’s and Panda Bear’s vocals flutter around each other in a crazy and most beautiful dialogue, there are references to TV-series (“No Blanche, she’s upset because they keep changing the taste of Coke“ / Golden Girls) – and: wind instruments. And as a challenge that is, since Animal Collective actually actively dislike saxophones and instruments like that. But it is through confrontational exercises that you get to work through fears like that eventually and as if by magic, it feels like the wind section has always made part of AC’s universe. Also fairly new: lyrics with an attitude, like in “Golden Gal” which picks up on queer political issues. And by doing so, AC land quite the hit, a song that will certainly be stuck in your head for weeks – the exaggerated Westcoast sound of “Flori dada” makes you want to put on your best cubist costume and throw around water lily pads. Klaus Walter referred to Animal Collective as “band in the know”. This may even have been meant in a disrespectful way, however, his statement sums up perfectly what Animal Collective are all about.
Christina Mohr

Initial thought: did it honestly take the New York collective a total of eleven albums to come up with this fairly obvious title? Animal Collective’s artistic output has always sounded an awful lot like this playful comparison to painting by numbers, like this big white blank page equipped with tiny markers, which is being coloured in by overeager children, who mercilessly make use of the entire colour palette. Obviously these children were in no way willing to pertain to set lines, but cheerfully chose to colour outside of the lines, if they felt like it. Why would you choose to accept and play along with restrictions that automatically arise within the notions of genre and concepts of sound, when the ultimate guiding principle actually ought to be pure and unadulterated curiosity?

The current incarnation of the band, which is composed of the three founding members Dave Portner (Avey Tare), Noah Lennox (Panda Bear) and Brian Weitz (Geologist), emphasises this excited endeavour to surprise with the first single “Flori Dada”. And well yeah, it would be fairly comprehensible, if you were to automatically think of the pensioner’s paradise set on the south coast of the States, of flamingos and palmtrees and all these other automated clichés that our brains happily provide us with, but then there are in fact those tropical influences within the sound, and of course African rhythm plays into that and the psychedelic weirdness that we have already gotten accustomed to when it comes to Animal Collective – and you could even be lead to think that a little bit of the Beach Boys’ West Coast vibe has made its way onto this record. The latter might possibly be due to the fact that “Painting With” was recorded in the EastWest studios in Hollywood.

Lennox names “the Stone Age men’s stone circles” as the initial vision that came to inspire the album. What he wants to say by that: after the – from a formal point of view – rather stringent previous record “Centipede Hz”, the trio wanted to bring back the rather playful orginal idea behind the collective. And they succeeded in doing so. I cannot name but one current band that even with their eleventh album is still able to present themselves in such a light-footed manner and at the same time is able to create quite a few moments of genuine surprise. Those who miss out on an album by Animal Collective, do – for once – indeed miss out.
Thomas Venker