Piano prankster Gonzales once memorably opined, “I’m against music.. but for entertainment.” He was having a go at Coldplay, of course. It’s a pithy observation that I recall from time to time when confronted by overpowering levels of musical smarts and joy. Looking at you, Magdalena Bay, as you raise the lid of London’s XOYO last Friday…

For all that it’s fleetingly hilarious that Kate Bush is currently “global number one” with “Running up that hill”, the world of “the charts” has long become a useless way to understand what pop music is currently about. Sure, the songs remain stubbornly about three and half minutes long, focused on love affairs and in some sort of Western key. So what drives the song forward, would you say?

In a notable old Harvard musicological study of the pop charts it was more or less established that the ‘seven chord’ (so beloved of classic 1960s guitar wielding bands as a lead-in to a chorus) had more or less died by 1992, largely thanks to culture’s growing love affair with hip hop, rhythm and percussion. These shifts happen. Suddenly we’re all about the skittery hi-hats for a bit. Thin gents who shout the words gain passing popularity. A few folk ‘put a donk on it’.

Which is why tonight’s show is, well… remarkable. 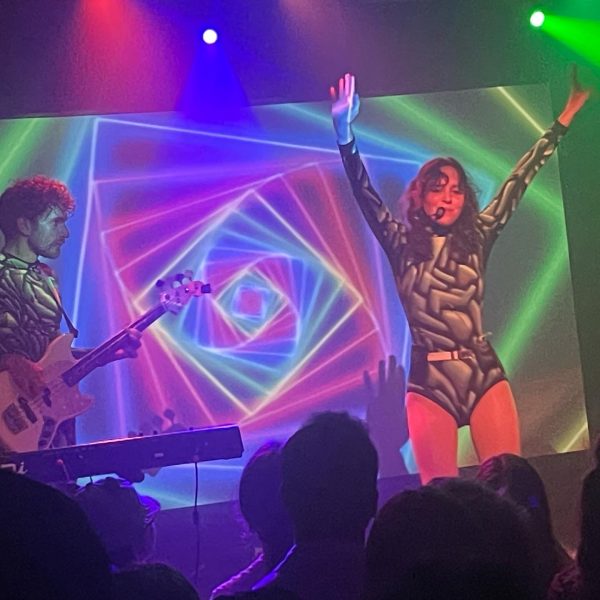 Mica Tenenbaum and Matthew Lewin, aka Magdalena Bay, hail from Florida and LA somehow filtered through Tokyo’s Shibuya-kei hey day. As they burst into what seems to be a greatest hits set at London’s XOYO, they somehow embody thirty to forty years of utterly different pop music all at once. This hour plus set from two insanely charismatic twenty-somethings, possesses all the carefree abandon of hippy-dom at its height but with the intentional brilliance of the Ableton generation.

Like Louis Cole, Genevieve Artadi or Jacob Collier, this duo seem to be part of a growing gang remaking and re-remembering pop from a different vantage point. For many a decade it was just sort of assumed that kids who do jazz, ah… not cool! And yet here we are. Tonight Magdalena Bay variously embody Michael McDonald, Kyary Pamyu Pamyu, Madonna, and the hardest working jazz trio you’ve ever seen. Every move is cuteness and precision, steely-eyed and joyful.

At points it feels like their bombastic set was assembled by an artificial intelligence given all of tumblr.com to chew on. Their tunes are playful and knowing, they end albums with songs about beginnings, and seem hellbent on reviving the diminished chord’s rightful role in a yearning pop chorus. Tonight’s show occasionally feels like a greatest hits jukebox musical about a couple who might be trapped in the prosaic rural hinterland of a Windows95 install CDROM, the band’s found footage visual vaudeville backdropping every song. Yet with a strong and growing following on YouTube and the ‘tok, almost every song causes spontaneous word-perfect singalongs from the manic, young crowd.

They periodically respond to questions posed by a robot interlocutor, who is ask keen as us all to understand this ‘Mercurial World’ (debut LP) they’ve created. It’s kooky, daft and counterpoints the slap bass (by Matt; gets whoops) and occasional intense shredding (also Matt; more whooping). Friday’s show from Matthew and Mica at XOYO in London is simply an air punching celebration of what happens when you keep spooning good ideas into songs. This is the show Grimes would kill to have made but would have over-thought. Magdalena Bay are nu-school meta-pop in the best way possible – the future it appears, is in safe hands.