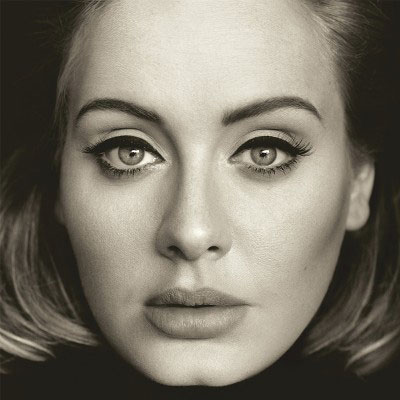 Does it make any sense at all to review a record that before even hitting the shops has already been chosen as record of the year despite the fact that there are still a few weeks left in it? Taking into account that it is not long until Christmas now there could certainly not be a more appropriate gift than “25”, right? Exactly, Adele always seems like a safe bet. It is certainly true that 27-year-old Adele Laurie Blue Adkins, MBE, has an incredibly impressive voice and at least on her previous release “21” (by now certainly everyone has heard about the fact that Adele names her albums after the age at which she wrote the songs) she managed to demonstrate her ability to write and perform some of the most intense and unsettling songs about unrequited love of all times and on top of that she delivered a pretty good cover of “Lovesong” by The Cure. However, I have come to notice that her albums seem to be the latest trendy accessory that everybody goes out to buy, just to be a part of it. It seems that the thought process lies somewhere along the lines of “well, we have certainly done a great job at choosing outstandingly tasteful designer furniture, the only thing this amazing flat now needs is something that will give this place an equally tasteful atmosphere – why not buy a CD? And how about a CD by Adele? Adele is at least not Helene Fischer! Adele is an internationally renowned Oscar-winning superstar hailing from the motherland of pop music!” Well, that just about sums up my highly subjective, highly prejudiced opinion of people who I don’t even know and still cannot help, but file under people who do not even care for music too much, but yet buy one album a year. Oh you know exactly what I’m talking about.

So what was it that I had initially set out to do? Right. I wanted to find out whether “25” is more than just a lifestyle accessory. The clichéd ballad “Hello” certainly does not help to convince me that this is not the case: an utterly safe number-one-hit, completely built around Adele’s voice, no surprises, no venture = the formula that will make for a guaranteed hit. Unfortunately this equation sums up the majority of the eleven songs that “25” consists of, despite the fact that Adele has hired a different producer for each individual track. But all of them seem to completely and solely rely on “that voice” and derive from it that her voice alone is certainly impressive enough for an album by Adele, as she is a singer after all, right? Adele on the other hand is too reliant on her role as sad, just broken up or about to leave someone, lamenting neo soul diva: “When We Were Young” achieves an unwanted level of comedy despite wanting to have the opposite effect. A few of the songs manage to save Adele from the over-all impression of being a too deliberately sad matron, like for example “Water Under the Bridge”or “River Lea”. These songs are also clearly dominated by “that voice”, however Adele allows herself to show off her tougher side instead of whining and wailing (again). It is during those songs that Adele truly seems to come to life – certainly something that could be done a lot more often, as she for instance demonstrates during her performances on TV.

I have to come to the conclusion that I cannot help, but kind of like this album. Dismissing it seems impossible and unfair, as “that voice” just gets to me too much. It is just sad to see that Adele is firmly pushed into the AOR-corner (minus the rock-aspect) and the times we live in will rather sooner than later fashion her into the new Celine Dion. That seems like something Adele should be lamenting and crying about.
Christina Mohr