Zauber der Moderne: “Works that contain and propose their own world” 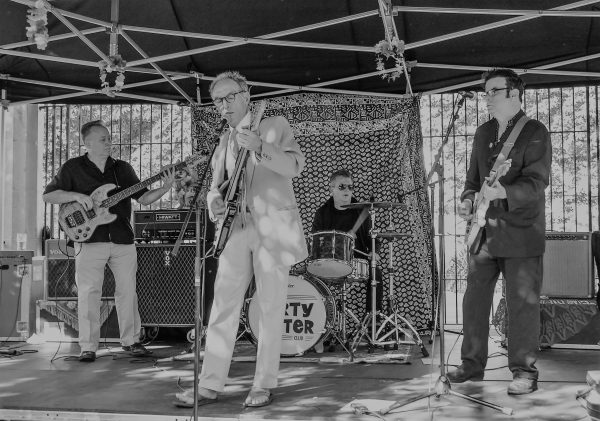 Fatima, Pauki, there is a certain tradition of concerts at the Künstlerhaus Stuttgart  – I think of performances by Workshop or  Schorsch Kamerun –, but a three day festival is a new statement. How did the idea grew with you and how do you see Zauber der Moderne positioned within the context of the regular exhibitions?

Michael Paukner: Fatima proposed the idea to me – and I said yes. I always liked the rooms very much with the columns and the large windows. The Künstlerhaus used to be a fabric for suitcases one hundred years ago. The rooms still transport the idea of large thought group workshops. The architecture seems very fitting for concerts – an art room is always also an option for a concert room.

Fatima Hellberg: The music scene here holds an energy and informality that brings something important to the exhibition space. I’ve been thinking a lot about the type of setting the art institution can be, and what it can offer. It holds this quite remarkable (and often unrealised) potential as a form of extended public sphere, formulated with and by artists, where scenarios can be tested out. Beyond Künstlerhaus being an institution, it’s also a house to be occupied, connected with the real and the tangible, but also with more suspended and uncontainable qualities. We wanted to take these spaces – industrial but also with a sense of robust beauty – and to try to make the ‘ideal festival’, with musicians’ musicians, friends and fans brought together in a ways where we would love to be there, and where we would like others to be there with us.

Looking at the lineup I primarily see the names of older artists, even tho both of your are very contemporary in your perspective on the art and music scene. How did you built the lineup?

Fatima Hellberg: In general, and this extends beyond this festival, the intention has been to work quite fluidly with the notion of the contemporary. Often, older artists are collaborating with or exhibiting alongside very young ones in the programme; a form of intergenerational lean which I think ultimately considers the current beyond the remit of a given ‘now’, and places it within the question of an attitude, a sensibility and connection with a deeper sense of the present. Marshall McLuhan has written brilliantly about the near-impossibility of capturing a sense of now – in all its simultaneity, radical coherency and contradiction, and there are quite few people, primarily artists, who can sort of capture or reflect, with both assertion and doubt, a form of the current. At Zauber der Moderne you have contributors that have evolved and re-negotiated their sound and expression, often multiple times over the years, with a line-up is spanning in ages between 19 and 84.

Michael Paukner: I was thinking of artist I follow for a long time, artists whose music I revisit over and over again and whom I wanted to see for a long time live but never had the chance. Yes, they are older, but on the other hand they are still recording and touring and by that part of the current discourse. Let´s take for example “Lodestar”, the album from Shirley Collins from 2017, this is to me contemporary music.

Michael Paukner: Well, I could tell you a imagined story, but let´s go with the truth. I was working at 2nd Hand record store and went through the classical music box section:  “Zauber der Romantik” , “Zauber der Melodie”, “Zauber der Trompete” … and suddenly there it was: Zauber der Moderne.
The title was there before the festival. Through the title the festival becomes a deeper meaning. Die Moderne is such a nostalgic wording, transporting all the hope that progress is a good thing and will lead to a better future, a paradox in other words.

What is the red thread of the festival? I heard you talking about the consciously chosen combination of a span of sensibilities and approaches.

Michael Paukner: The red thread is actually a yellow, blue and green one. It all is hold together by the different styles and temperatures of the music of the artists – and the fun. Or let´s say it like that: Shirley Collins, Richard Youngs and Alasdair Roberts all got those out of ordinary, wonderful, otherworldly voices. F.S.K. and Vic Godard’s Subway Sect are keeping 40 years after Punk the situationistic and liberal ideas of awakening vibrant and bring it in with a mix of humor and elegance.
Another important factor for the festival is the inclusion of local networks of visual artists, djs, producers, cooks, musicians and friends.

What contingency and transformative qualities do bind the music by the participating artists together?

Fatima Hellberg: Something which we spoke quite a lot about in the preparation of Zauber der Moderne was the question of works that in a sense contain and propose their own world. A form internal logic and system of measurement. This does not really have to do with control or logic, but a form of interiority and way of seeing that moves through the sound. There is contingency to this way of working, perhaps because in and of itself, it does not necessarily directly negate the state of things, but holds within it a form of latent remainder of an otherwise. I think these parallel worlds also evoke the importance of registers that cannot be fully pinned down or contained in language, to the essential ‘uncontainables’. We wanted to give space to these qualities and spend time with them.

The artwork was created by  Christian Flamm, a London based artist who originally comes from Kornwestheim and whoe work is closely connected with the Berlin Mitte art scene of the late 90s / early 2000s. Why did you chose him and why the pineapple?

Michael Paukner: Christian is an old friend of mine. I always dogged his clear, unfussy, trenchant and graphically very reflected work. The pineapple is… well, let´s keep it a secret.

Fatima Hellberg: Christian did a wonderful show called “Künstlerhaus Stuttgart,” here at Künstlerhaus back in 2018 and he has this remarkable ability to be both extremely clear, bordering on pop, yet always seeping complexities. Without saying too much, the pineapple, within modernity a sort of glam symbol of decadence, now more commonly known from every supermarket regardless of season, is a form of mundane luxury, and absurdity. In general, and I think this has happened at every step in the festival, we have given quite a lot of agency to the people involved. This is in a sense also how it started, knowing Pauki’s brilliant sensibility, I was curious to see what would develop, a matter of being quite open and free with ideas whilst combining this with conversation and shared reflection.

Coming from the pineapple: Who came up with the idea to include „Essen & Trinken“, food and drink on the poster? Quite Swabian.

Michael Paukner: Fatima and me. As said, we wanted to include as many people as possible from the great network around us – and of course this does not end with artists. Take for example Luchterhand who runs the bio catering company we work with – he used to be the saxophone player of the local noisecore band Midget. He simply had to be a part of Zauber der Moderne.

Fatima Hellberg: Beyond the obvious things, like programme and approach, we have been thinking a lot about these more ephemeral qualities of atmosphere and mood. To think of your audiences and the people who contribute to the programme, and to make sure that they are cared for and that their needs are met, also on the most basic level are these simple, yet essential things in creating a space where the temperature is right.

Can you share some insights about the Matinee section? What kind of film screenings can we expect?

Michael Paukner: On the Friday we will show the beautiful documentary “The Ballad of Shirley Collins” – the producer of the film, Paul Williams, will be around and answer questions after the screening. The programming for the Saturday is still in process. And on the Sunday there will be a concert by my band Metabolismus – a folky, psychedelic happening.

The „Set-Design“, to use your wording, comes by Monika Nuber and Julia Lenzmann. The wording references to a movie shooting.   Are you documentating the festival?

Michael Paukner: Like always at Künstlerhaus, there will be a documentation of the events. Monika and Julia had total freedom when it comes to the set design – as long as the audience has a clear view on the happenings on the stage.

Fatima Hellberg: The work that Monika Nuber and Julia Lenzmann are doing is focused on the intersection between functional elements and a sense of the Zauber – there is a surreal strand running through much of their work. Here one central element is a backdrop by Graham Lambkin, one of the performing musicians which forms a form of holding environment to the concerts. Most often, festivals have little space and resources to attend to the type of setting in which you find yourself – with Künstlerhaus there is another freedom to create a concept across two floors. We did not want the exhibition spaces to be a neutral backdrop but to be transformed for Zauber der Moderne and sit at the intersection between functionality, beauty and something more absurdist.

Fatima, Pauki, thanks so much for your time. 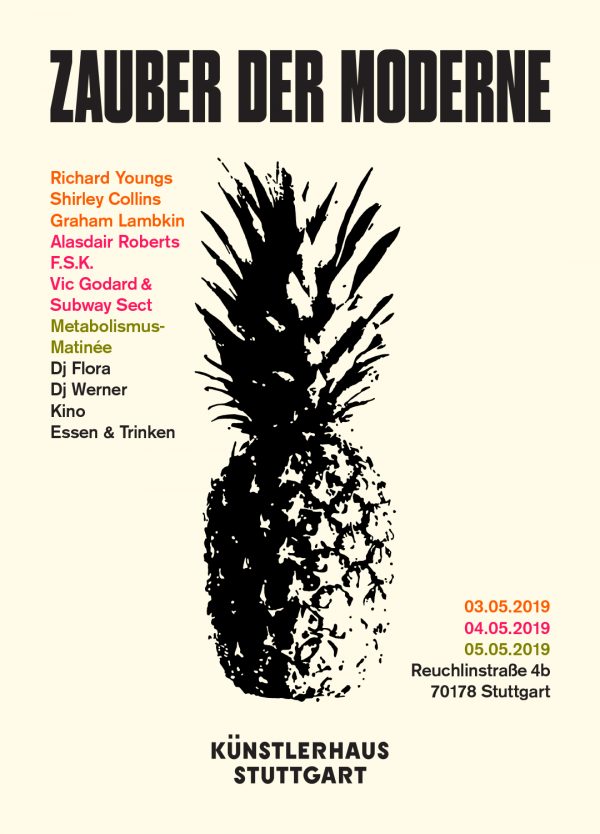