on power and dominion, visibility and representation, and on intersectionality in pop music 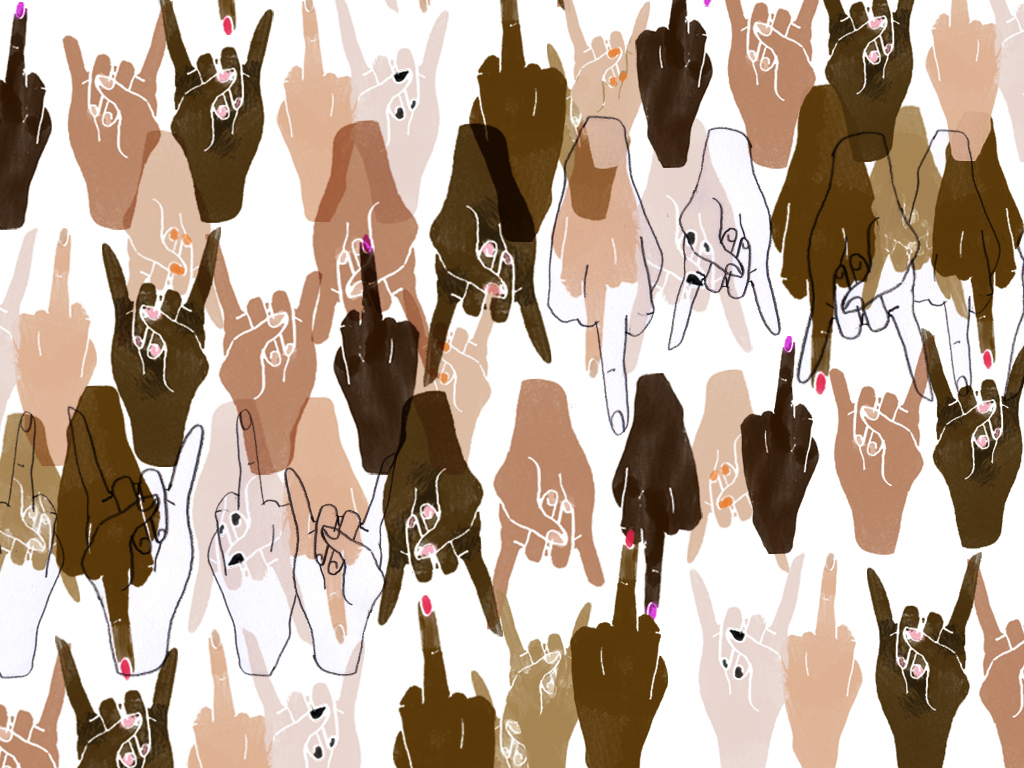 In the spirit of slow journalism, we are not giving in to the next and newest hype this month. Instead, we are taking our time and listening more closely, looking for the explicitly feminist perspective on pop culture.

In the third text of the series curated by Aida Baghernejad, she herself thinks out loud about power and dominion, visibility and representation, and intersectionality in pop.

In the summer of 1991, a young Kathleen Hanna wrote down rules for her feminist agenda: “THESE ISSUES MUST BE INCORPORATED FROM THE BEGINNING: anti-racist, … [anti]-heterosexist, [anti]-classist work cannot be ‘written in’ the margin, they MUST BE CENTRAL.”

Almost 30 years have passed, Bikini Kill even goes on a small reunion tour this year – but Hanna’s notes haven’t lost any of their relevance. On the contrary, even though society has evolved in many ways, we are experiencing a backlash against progressive ideas in general and against minority rights in particular. In the age of AfD, Trump, Brexit, Orban, “Fake News”, “Pro-Lifers” and “Immigration Critics”, of “Identity Europe” and “Nipstern”, all those who do not conform to any implicit or defined norm must be cautious: On the internet the twitter mob is threatening, offline refugee homes are burning, and in the south of Neukölln civil society activists are being threatened and attacked. These are just two of an infinite number of examples.

Also thirty years old is the term intersectionality, for which the Böll Foundation just recently celebrated a birthday gala. Intersec-what? The concept of intersectionality was developed by lawyer and activist Kimberlé Crenshaw to explain, in short, that oppression can not only be one-dimensional but multidimensional, and that different forms of oppression – such as sexism and racism – can also intersect and reinforce one another. Audre Lorde wrote in 1992, that “There is no such thing as a single issue struggle because we do not live single issue lives”.

But what does all of this have to do with pop music? Isn’t pop this wonderful utopia in which we all dance happily together into the sunset? Isn’t pop this mythical place where ebony and ivory can live in perfect harmony?

Alas. If it were that simple. What a wonderful world it would be. Whose body, whose voice, whose story is allowed to be represented in pop? After all, pop is there for all of us – technically. But at the same time, oppression is already anchored in the DNA of pop culture: Take Sister Rosetta Tharpe as an example. She was almost forgotten until she was honoured by being included in the Rock’n’Roll Hall of Fame in 2017, but she is actually regarded as the inventor of rock music. She was one of the first artists to use distorted guitars, shaping the sound on which pop culture is based. Chuck Berry even admitted that his entire career was actually just an imitation of this pioneer. And yet – her name disappears behind Little Richard and Chuck Berry as their names disappear behind Elvis. Could it be that Ms. Tharpe was not only black, but also a woman, and a queer woman at that? Who was born in 1915 in the South of the USA, in relative poverty? Whose story is told, whose story is remembered, whose creative work is valued?

But we don’t need to look so far back, a short trip to 2015 is sufficient to reveal the same mechanisms of visualization and representation. At that time, there was an almost ridiculous controversy about the MTV Video Music Awards and Nicki Minaj, whose music video for “Anaconda” was nothing less than a cultural moment in the preceding months. You can think that the video is tasteless, exaggeratedly sexualized, you can doubt Minaj’s agency as an artist, after all, it is never quite clear who is really pulling strings in global mainstream pop music. But one thing is certain: in that year you could hardly, no, actually not avoid this music video as a pop cultural reference. It was one of the most watched music videos, it was remixed, rehashed into memes, discussed.

If I was a different “kind” of artist, Anaconda would be nominated for best choreo and vid of the year as well. ???

If your video celebrates women with very slim bodies, you will be nominated for vid of the year ?????????????

Which led to a disappointed response from Taylor Swift. She was nominated for a video – one in which she appeared next to her model friends. Swift felt attacked and indignantly wrote that women should not oppose other women, maybe one of the male artists had “taken her place”.
And this brings us to the main problem: While Swift does not see the criticism of the system, but takes it personally, breaks everything down to the question of gender and basically demands unconditional solidarity between women, there is actually something else at stake: Minaj is not only a woman, but also a black woman, and on top of that she is active in a genre which is primarily populated by men and which struggles with its own racist attributions. From the very start, there is no even playing field. And the fact that the work focuses on a black woman who, at least apparently, confidently controls her sexuality, still breaks an unspoken taboo. Because the body, the (cultural) practices, the narratives and the behavior of non-white women can be the background, theme or resource for other artists – but when they appear as independent actors, it gets complicated.
Half-naked, twerking women in music videos by men? Absolutely, totally normal.
Cornrows on the heads of white people? Edgy Fashion.
Marginalized people, influence the mainstream – but the profit is made by others. This can also be seen in protest movements: #MeToo was started by a black woman – who was subsequently (almost) forgotten, the Women’s March was started by a black collective, the list could go on and on – but the result is always quite similar: These people are pushed into the background, the intersectional aspect of the fight against oppression disappears behind supposedly “simpler” individual concerns, which are not complicated by the inclusion of factors such as class, race, health, gender and so on.
This is not a recent development either, back in 1851 the abolitionist and women’s rights activist Sojourner Truth (allegedly) asked: Ain’t I a Woman? Or do only privileged women have this right? Today, we are perhaps more advanced in so far as a growing part of humanity can recognize that there are not just two sexes. But apart from that, things are quite dire.

Even in contemporary pop culture, there are enough examples of the appropriation of cultural codes by members of dominant social groups. These cultural codes and symbols are then emptied of their cultural relevance and reborn as commercial products. A good example is Gwen Stefani: her career is marked by cultural appropriation – ranging from the bindis on her forehead in the nineties to the fetishization of Japan during her solo career in the early 2000s when for years she traveled with a squad of mute Japanese dancers. As a white woman, she has the freedom to play with symbols, to take them out of context and to use them as decoration for her performance. Women who grow up in such cultures do not have the privilege of being playful – they are classified, assigned, put into drawers. Wearing traditional clothing, for example, means for non-white women to further marginalize their status in the „white supremacist capitalist patriarchy” societies of the Global North, as bell hooks calls it, and make them the target of attributions.

This is particularly evident in the debate surrounding the Contemporary Muslim Fashions exhibition at the Museum für Angewandte Kunst in Frankfurt. Hijab and modest fashion have undoubtedly arrived in popular culture, including Hijabi women as Youtube stars, models with hijabs in the swimsuit issue of Sports Illustrated, at H&M, Nike or as new heroines in the international boxer heaven. A self-confident generation of young Muslim women is creating their own style, whether with or without a headscarf, and this exhibition, which has caused a sensation in San Francisco, reflects this new self-confidence – but the German press landscape was indignant. Muslim fashion in a museum? Simply put, the main criticism was that it would only downplay Islamism. Muslim women with or without headscarves should not speak – they are being talked about. Especially wearing the headscarf as a visible symbol of their religious beliefs and cultural affiliation, these women experience exponential discrimination, they are denied agency, autonomous action. They are being talked about – but they are not being talked to enough, their own words rarely make it through the noise. They have a hell of a lot to tell and the discourse would be much more productive if they would be given space during all those talkshows on all the TV and Radio channels every night, instead of the perpetually same usual protagonists being invited.

Especially the female-read body is seen as an object of discussion in all forms and all degrees of coverage and is in a certain way regarded as a supposed “common property”. Hijabi women or people who refuse to accept implicit (and sometimes explicit) norms thus rebel against a system that opposes itself with further discrimination and oppression. And this is precisely why pop cultural representation is so important: it works against the individualization that goes hand in hand with discrimination. It shows: You are not alone.
An artist like Lizzo, for example, who not only lives intersectional feminism but also verbalizes it, is a role model in this respect. Or as she herself says, “I represent black ppl, black women, feminism, intersectional feminism, big girls, big black girls, on a daily basis […]”.

In works like hers or that of Solange Knowles, liberation from the white supremacist capitalist patriarchy becomes a pop cultural issue itself – and possibly redeems the promise of pop music as liberation in a completely different way than the rock’n’roll cliché once promised. But that doesn’t make it any less relevant – it just makes it all the more true. The Riot Grrrl movement, which was barely being talked about by the music press back in the nineties and if it was, only to be criticised, would nowadays probably survive in its niche thanks to social media, Bandcamp and the likes, and could reach people who used to feel isolated and had to cope alone with all the impact of the oppressive system. Because, even if it sometimes seems as if society is taking a few steps backward rather than forwards, and as if Facebook, Twitter and co. are only accelerating the downfall, at the same time, we have to see that these tools can also connect us in the common struggle against structures that in reality do not give anyone an advantage and oppress many, many people. Artists like Lizzo can express themselves more freely, develop and serve their fanbase, marginalized and intersectionally discriminated people can create their own structures in which they can organize themselves and fight for a fairer world. But this struggle is not the task of those who already have to cope with everyday oppression, but a task for society as a whole, especially and precisely for more privileged groups. After all, it is actually quite simple, as of all people a white man, the poet and anarchist Erich Mühsam, who was murdered by the National Socialists, wrote a long time ago: No one can be free as long as not everyone is.