Steffi Jakobs is one half of the electro-pop-duo Tubbe. Tubbe hail from Munich, they live in Berlin, their records are released by Audiolith – those flamingoes from Hamburg -, and they are deeply involved in the queer scene. Their show at the CSD in Kiev was to be understood as party on the one hand to to show solidarity with the local LGBTs on the other hand. That’s not what happened. Steffi took pictures and now recounts what happened to the band over there. 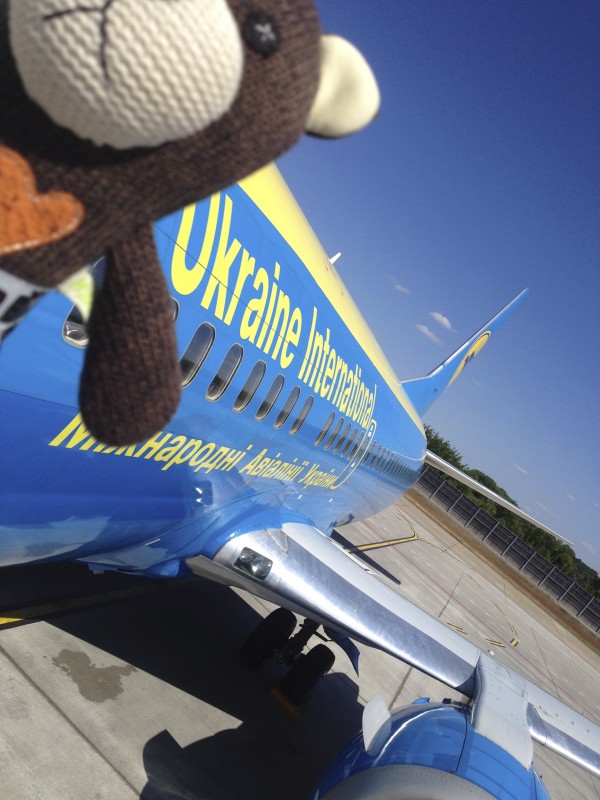 You have to bear in mind, that there are people, who are against people being in love. Just because they think it’s stupid. Or gross. Some are even convinced that God would love to unpack his sledgehammer to floor the aforementioned lovers. That’s obviously not the smartest argument, but that shouldn’t be a reason not to approach this situation a bit less emotional. Maybe the haters simply rejoice because the earth is a disc with which you can play frisbee. In case you haven’t noticed yet: I’m talking about homosexuality: oops.

CSD in Kiev – party is somewhere else
The CSD in Kiev took place recently. If you’d hear the words Christopher Street Day in Berlin, you would unpack you party shoes, tell your 500 Facebook friends about the exhilarated amusement that’s about to happen, and throw yourself into the fun. Something along those lines. The situation in Kiev is a bit different.
But first things first. My band Tubbe and me have been invited by the organizers of Kiev Pride to play a show during the CSD. Shows are nice. They make people happy, and happy people aren’t mean to each other. A lot of people in the Ukraine aren’t happy right now, which obviously means, that they have a lot of time for hate.
There was supposed to be a parade before our show, like it’s common for CSD. Parade sounds like a noisy bluster, like a mass event with a plethora of viewers, and fireworks. But a CSD parade in Kiev looks like this:
1000 policemen and military to guarantee the safety of the participants, a route of 200 meters – and nazis who are not at all in the mood for the event. 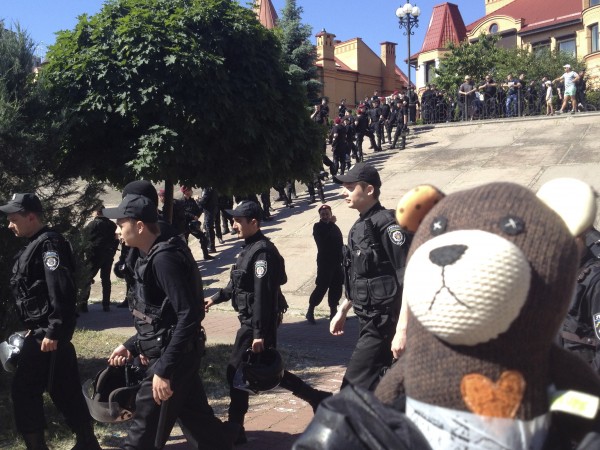 200 meters of parade
At 8 o’clock in the morning, everyone who registered to take part in the parade was informed of the meeting point.The night before, everybody got a list of safety instructions. How to behave if something happens, whey you get attacked, and so on.
Not quite like Berlin, huh? Then the morning arrived.
Around 300 people had gathered, unpacked some banners and slowly started walking. Outwards everything was shielded by countless policemen, who were arranged in rows of three around the demonstration. For a long time, they weren’t even sure if this protection could be guaranteed.
Mayor Klitschko wasn’t really up for this kind of circus. While the Ukraine is in the middle of a war, such rubbish is not really appropriate. Always this annoying fight for human rights of minorities… How inconvenient, mayor Klitschko. The march only could take place after president Petro Poroschenko said, during a press conference,that every citizens of the Ukraine should be allowed to take the fight for his rights to the streets. 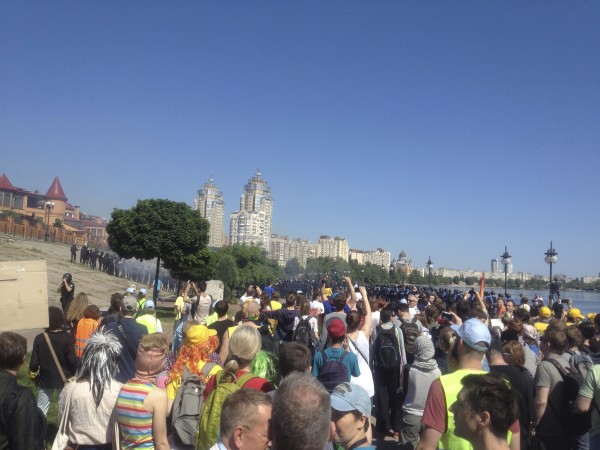 Nail bombs and molotov cocktails
The parade had only moved a couple of meters (from around 200 overall), when suddenly masked figures came at it from the front. Somehow rightwing extremists managed to get through the blockade. Before the event, the “Right Sector” had already announced that they want to prevent the demonstration by all means. For these groups preventing something means to throw nail bombs and molotov cocktails. And that is exactly what happened. A completely peaceful parade for human rights got attacked be a mob of nazis. The police was able to intercept the attack. One policeman was hit by a missile at the neck and was badly injured. The assembly got broken up after the attack. The smart and safe thing to do would have been to escort everyone to a secure evacuation. But this would have been to much intellectual effort for the police and they dismissed the crowd with encouraging words à la: Stay together in groups – and now run! Neat solution, if you bear in mind that a horde of wild nationalists are on homo-safari throughout the city at that moment. And so the inevitable happened. Some nazis hid in the surrounding blocks of houses and preyed on the protesters. Many of the hunted were able to flee into supermarkets and banks and had to wait for a couple of hours, until the self-proclaimed elite of the city got banished or detained.
CSD in Kiev. Not that much partying.

“We will go to Kiev and play shows for our friends. Because everywhere, everybody, at all times should be able to walk hand in hand without assholes beating them up for it.” 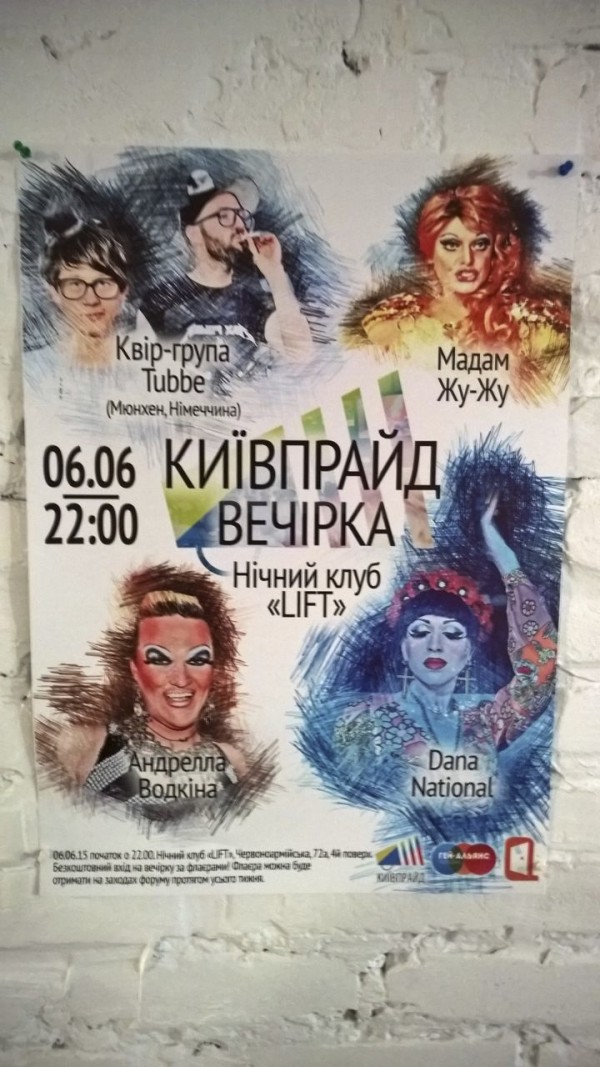 So much hate
Because the organizers feared, that the rest of the events weren’t secure enough, everything else got canceled. No lectures, discussions, or shows. Who should you even talk to, if someone screams so loud that you can’t hear anything. Of course we are upset and sad about the incident, and shake our heads that only a two hour flight away from home, people must fear for their lives, because they didn’t fall in love compliant with mainstream beliefs. In Berlin, and other major cities, we live in a bubble. A very pretty bubble. We are accepted and respected for the most part, and don’t have to be afraid, or have to hide. We are discussing. if we are allowed to marry. Our friends in the Ukraine are discussing. if they are able to walk through the city holding hands. That is something you should keep in mind even with all the turbulences in your own live. Some people waste their lives hating. The other, the unknown, and the alien. Because they are discontent of just suck. I sometimes hope that one day all of these people will realize that hate makes you ugly and is as much a solution as checkered crop pants are.
Until the day that this insight prevails we will go to Kiev and play shows for our friends. Because everywhere, everybody, at all times should be able to walk hand in hand without assholes beating them up for it.