Ziska Riemann: “Art has the ability to confuse one’s point of view” 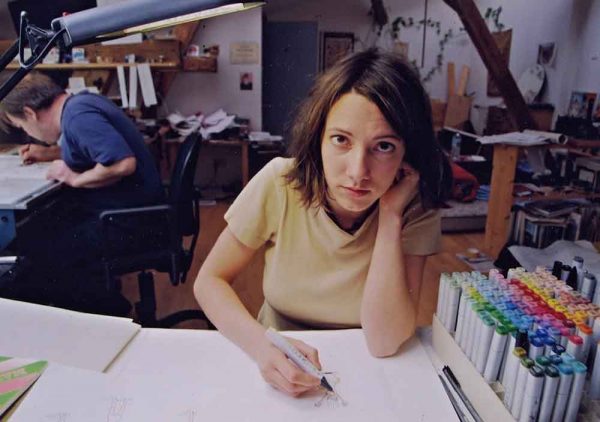 I met Ziska Riemann around 1999 in a Berlin bar called Trompete. It used to be one of my favorite hangouts during the Nineties because it was situated in the basement of the Lützow Galerie, a state-subsidized art space, curated by Karin Pott, an avid art lover. The place had a wonderful crowd of artists and musicians, performing shows and presenting curious art pieces in the imaginative settings of which Karin was a master of creating and the atmosphere was always high-pitched and frenzied. The Gallery would frequently host food art installations, Japanese paintings and Marina Abramovic, who performed regular installations with her student classes. The bar below organized the opening parties with drag queens, cowboy bands and cabaret shows enhancing the exhibitions magically.

This interdisciplinary setting was perfect for Ziska and she was introduced to me at one of these occasions. I remember her being quiet and modest when I met her, which was extraordinary, because Ziska already was a well known comic artist by then. She had started working together with the celebrated Comic impresario Gerhard Seyfried in 1991 but was recognized for the handmade comics she had been selling on the streets as early as 1981 as a tiny, serious street kid.

These early experiences must have formed her into becoming the very self reliant, introverted artist she is because Ziska is different than most artists one meets. Besides the fact that she moves with ease in areas that are still mainly male dominated, she is not pushy, loud or overbearing. Quite the opposite: Ziska is a good listener, a polite and quietly reserved, inquisitive woman, serious to the extent of almost being shy, who has such an enormous amount talent that it seems there is no limit to what she can do. She also has the knack of creating colorful, playful universes of her own into which she invites other creatures to interact with her, creating stories, songs and films on the way. 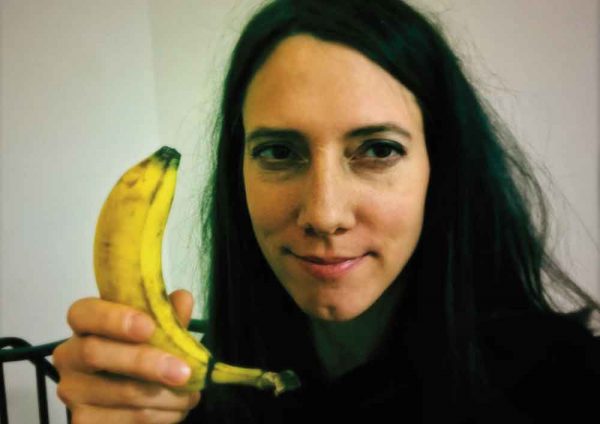 A couple of years after we met she invited me to write a song for her record compilation “Bleib Gold Mädchen” for which she also quickly founded a label: “Mer Mer Records”. The collaboration was fun, especially because it was about writing songs portraying personal, teenage experiences and the results that floated in where humorous and yet poignant–a typical Ziska combination. We continued collaborating for a couple of years until our schedules became too tight. The next thing I heard was that she was making cinematic movies and very successfully so.
The first one I saw was “Lollipop Monster” of which I loved the colors and pop settings, very reminiscent of her drawings, and the story of two teenage girls and their difficult families. I love Wes Anderson because of his visual style and am always happy when somebody comes along that is as playful and fearless in their story telling. Ziska has these components and I am delighted that her filmmaking is so fruitful.

But the thing I love most about Ziska is that she always gives the impression of anything being possible. Nothing seems to daunt or stop her and she works on fulfilling her dreams in the loveliest manner. In times where being a opportunistic, aggressive, corrupt egomaniac has become acceptable to achieve success she makes a wonderful example of the fact that integrity, dignity and thoughtfulness paired with determination and talent can take you a long way. She is an inspiration and I am very happy to present Ziska here today.

Danielle de Picciotto: Ziska  you just finished your second feature film. I know you as a comic book artist and was very enthusiastic about the colorfulness and popart style of your first film. How did this development happen?
Ziska Riemann: I rather involuntarily slipped into filmmaking. Already with my first screenplay ‘The dogs are to blame’, the producer tried to persuade me to produce the film myself. I vehemently refused. I never wanted to do that. This was because I had lived with a film student for a while, who turned our shared flat into a chaotic film set. She was completely stressed all the time and screamed continuously. When I opened the window, I would hear her cheering on the actors out in the street with a megaphone. That pretty much scared me off as a draftsman who likes to scrawl undisturbed at my desk.
It was different with ‘Lollipop Monster’. The producers did not have to convince me, because I knew instinctively that nobody else could do it. ‘Lollipop Monster’ is based on the youth stories of Luci van Org and myself. The script reads like a comicbook, it is slightly exaggerated, fast, poppy and on the point. When I started working on the set, I quickly realized that I can do it and it’s fun. Filmmaking combines all my talents: storytelling, visual realization and music. I have a lot of respect towards actors and so I took lessons of my own before directing to find out how it feels and which directives are feasible and why. 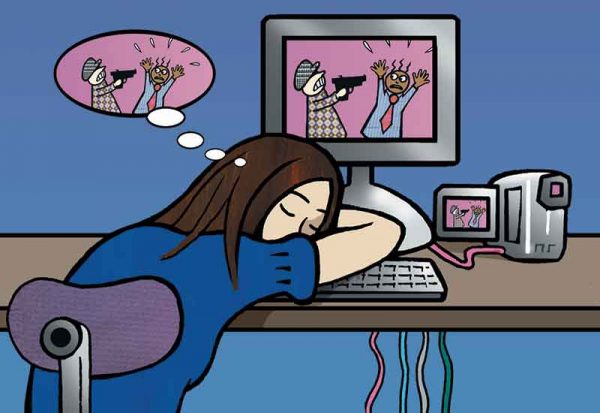 What fascinates you fundamentally in visual work, be it in comics, painting or film? What are you looking for? How did you start?
Actually, I come from telling stories. That is the red thread that runs through my life. Every story demands its own form. Comic, poem, song, movie … I have dealt a lot with lucid dreams and with the unconscious. Images are intimately connected with our perception and the resulting view of the world. I would even say that the body feels and understands the language of images on a subtle level that is beyond thought. No matter if I draw, paint or stage a film, every little detail tells the viewer something that in the context of the story has a meaning and that would be different in another context. On the visual level, symbols can and must be handled very precisely. That fascinates me and at the same time it is annoying. Everything has to be considered. Everything has weight. I’m always looking for immediacy, the moment when inside and outside coincide. When the work is so authentic and precise in its symbolism it touches the viewer directly.

Your topics have a lot to do with young generations. What interests you about them? Is it the colorful cheekiness or the “growing up” with all its facets? Where do the stories come from?
Maybe it’s because I do not feel like I’m really grown up. I still live the same bohemian life as twenty years ago. Since I have no permanent job, no family, no obligations, I can travel carefree, sleep late and flow with the constant change of life. The price is an eternal uncertainty about how it will go on, existential issues and the experience of everyday life in the constant flux between creative ecstasy and hopelessness. Even as a teenager, I asked myself all these existential questions: why am I alive, who am I, what is life, love, death … etc. Life as a teenager is still fresh and intense, and the stories have a liveliness and power that is thwarted with the aging of reason and experience. As an artist, I constantly need change, I have to question myself and my work, to develop myself further, to reinvent myself constantly, otherwise stagnation happens. I like to tell stories that are colorful and intense and that create feelings. My last movie, “Electric Girl”, is about a young poetry slammer who has a manic episode and believes she’s a superheroine. She actually develops supernatural powers, can jump over roofs and see electricity. In the story, energy, obsession, and madness come together, and the whole thing is about picking up speed.
This is my kind of story. 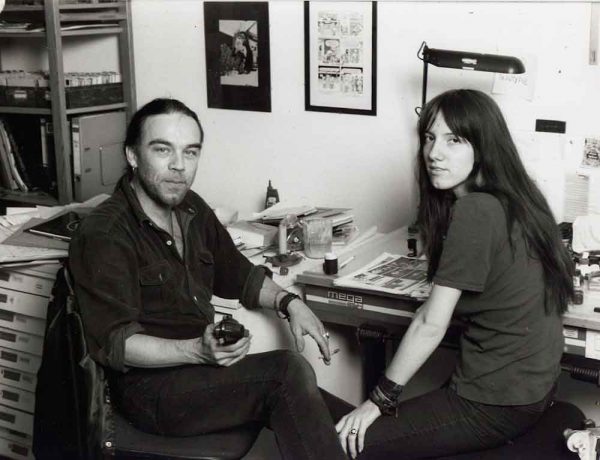 You have worked with Gerhard Seyfried for a long time. Was your work always meant politically? Do you think art should be political?
The comics that Gerhard Seyfried and I did together are all very political. They could be considered anarchist propaganda. Seyfried is very political and he is always well informed about world affairs. I am much more romantic and dream of utopias. As the daughter of a Trotskyist and a Buddhist, I learned that the world can only be truly free when all are free. Or even easier, that the world only changes if we change ourselves. We tried to convey this in our comics. Art has the ability to change one’s perception, confuse one’s point of view or introduce another. Art makes things visible, even if they are only trifles that we might not have noticed without the impulse of the work. On this level, at least in our inner life, art can trigger a small or even a bigger revolution.

Did you experience discrimination as an artist or director?
When I was traveling with Gerhard Seyfried, people often asked me: “And you fill in the colors, right?” Obviously, I was pretty offended. We’ve always said that we both work on comics equally and we are both the writers behind it, but people do not want to hear that. For them I was the assistant, or the lover, or the muse or something. Later on I was invited to panel discussions about women in comics and stuff. There they would speak about whether women can draw comics. You have to realize that the comic world is pretty sexist. Back then I was one of the first and also the youngest women to be there and let off steam. That was not always easy. In the film industry, we are fighting for a women’s quota. Pro Quote Director has also set up a complaints office where we can report sexual assault. Maybe I’ll go there someday. 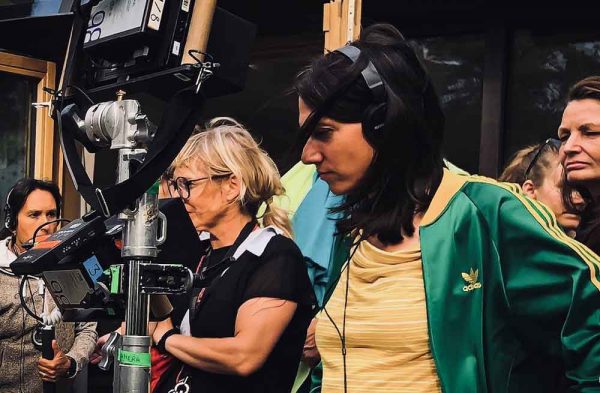 Ziska Riemann on the set

What are you working on right now?
At the moment I’m sitting in the editing room, finishing a movie that will be released in the fall. It’s a pretty flashy and radical, sex-positive educational comedy for teens.

What are your plans for the future?
On the weekend I’m going to shoot a music video for Gemma Ray. I’m sure I’ll be working on my movie until summer, besides that I’m going to illustrate a children’s book and then maybe travel for a while and collect ideas?