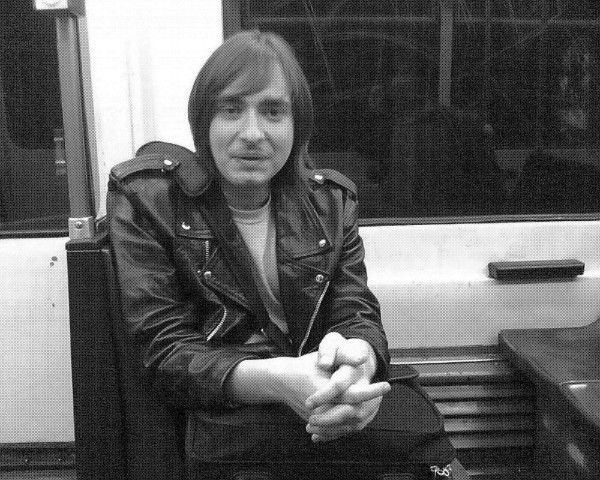 I went out the night before Daso died. Courtesy was playing at Studio 672, and at some time in the early morning hours I took out my phone and recorded a short, chaotic video: Flashes of light, a beautiful melody and the happy sounds of happy dances and then I sent it – going with an almost naive impulse, which ignored the sadly much more serious beat of the world – to Daso’s girlfriend accompanied by the desperate-euphoric words: “We are dancing the whole night through for Daso. Sending love and peace to him.“

Four days earlier I had visited him at the clinic in Berlin for one last time. It hasn’t been an easy visit, since it was actually obvious that this time it would not end well again (after he had once before fought himself out of the abyss of the cancer due to his unbelievable will to live). But that is not something you would want to admit.
Daso was lying in his single room and a stereo system in the corner was playing music – his music. Nobody but me was there. Since he had a hard time talking we were mostly communicating with our eyes and were listening to music. Suddenly the severity got lifted and everything seemed so peaceful.

It was exactly this short moment of shared weightlessness that I had to think of during this night at the Studio on the dance floor. I wanted to share that with him. He ought to feel as if he was with us. Present on the dance floor that meant so much to him.

When I woke up the next morning I felt remorse. Why did I have to write that message? You shouldn’t do something like that – or should you? It somehow felt right, but as so often in life, there was this fear that what feels right for you might not hit home for the other person. Often you don’t do things because of this. I wonder if that is better?
I made coffee. Then I turned on my mobile phone. One new message:

„Daso has passed 13:30. On a beautiful, sunny, and crsip Easter Monday. We listend to Meine with him before his last breaths.“

There is this saying, that we all think of in a moment like this, which says that it is better for the person that it is over now. And yeah, that might be true. But it still is no consolation. It is an astounding unfairness, again and again, when good people who never did anything bad to others and who always embraced the world and their fellow human beings with open arms, when people like this have to leave this world way too early. Daso was someone like that.

I do not remember exactly when we met. It must have been the summer of 2004. Suddenly this boisterous boy was present in Cologne. And more and more often in the surroundings of our clique. On evenings when you were out, having drinks at Sixpack, Barracuda Bar and Studio 672, and went to a club later on he usually appeared quickly. Daso was one of those people you could not withstand . He was present in a very particular way. I do remember some nights were it was too much, since he sometimes lacked the feeling for the end of his own space and the beginning of that of others, due to the frenzy of his own vibrancy. But that was exactly what was so special about Daso, he stumbled into the world with an infinitely great heart and all of these feelings needed to be shared.

Therefore it suited perfectly that it became clear: this special character is a musician – and an extremely great one on top. This did get about to my friend Jens Friebe who was urgently looking for a producer for his second album “In Hypnose”.
I am now quoting Jens from his homepage where he remembers the development history of the album: “…whereas I had to travel to Cologne with a piece of paper, on which was written “Daso Franke, Electronic Musician” and an address. A boy, he might have been in his late teens or early twenties, did open a hatch in Mülheim. It was hard to guess what was going on inside of him, as thick glasses were concealing his soul, but there is one thing I can tell you: Theses young people are not operating their machines – they are their machines. There was never more than a weary click on his mouse between the wish for a sound and the sound for this posthuman mythical creature. Only when I asked him to transport the single tracks from my antique Groovebox into his computer, his mood turned sour. For a modern musician MIDI is kind of like chisel and stone tablet for a modern Journalist. After 12 hours of Midi Daso smashed a street lamp and badly hurt himself. Luckily everything was fine again the next day, thanks to his young body, which is obsessively producing new tissue. Just as for me. Insofar I had all ingredients at the ready…”

During the same time he started releasing his own material. The first one immediately turned out to be a veritable hit: „Daybreak“, , was released on the Cologne-based label My Best Friend. Two years later “Meine Idee” was released on sister label of Ghostly International, Spectral Sound – including “Meine”, a track as it is not accomplished often, equally euphoric and equipped with all the attributes of a rave classic, but at the same time melancholically pensive. The best of all worlds.

I planned on writing this obituary for Daso on Easter Monday, but I couldn’t even make it close to my desk. Even a month later, when Daso was being buried I couldn’t even try. It just didn’t work.

Now it’s the 24th of May. Daso has been dead for almost two months and I did listen to a lot of his music over the last days. It started concurrent with writing this text. I don’t even remember if the impulse to write or to listen was first, it is likely that both were one.

I remember well how someone enjoined me to be sentimental in any way, during the night in which the death of the Cologne-based techno producer Christian Morgenstern transpired. They said to me, that Christian was dead and wouldn’t be able to feel anything, and that this grief and anger was just about oneself. That might be possible, I thought back then, but just shut the fuck up. The reason for this was, that this letting oneself be sentimental, that gets triggered by death, the eternal and insoluble quarrel with the injustice of nature, that all of this is important, just because it is not just about you, but it happens in harmony with the person, that just left us (in one way). There is so much truth and love in these memories, and we do not only have the right to cling to them, we should necessarily do so.

His music is an endless amplifier of these memories. Just now I’m listening to “Ride Tide”, on of the many melancholy hymns written by Daso, which contained far more than the simple pathos of a club, by also carrying his bright, and intelligent, and loving view on the world. Just watch out for the spacey comets zipping through the sound space, or these strange rattles.

Daso once produced a remix of “Gespenster” for Jens on the label Scheinselbständig, run by me and Markus Tomsche. I really liked the mix, as it – even more obvious than in their joint production for “In Hypnose” – asserted Jens’ terrific way of handling words and of singing with Daso’s intuition for melody and rhythm. I think, that the song sounds like it is from the soundtrack of a film by Rainer Werner Fassbinder. Somewhere in the depth of a bar where fortune has not been present for a long time, two are fighting against the end of the world with music.

Daso made music until shorty before his death. He wanted to call the album “Chemo Cat”. When we were talking about it last summer, I tried to dissuade him from doing this, since I didn’t want that everything would turn around the illness after the record is released. Back then he just got through the first chemo, successfully, and it seemed as if things would turn out fine. It didn’t.