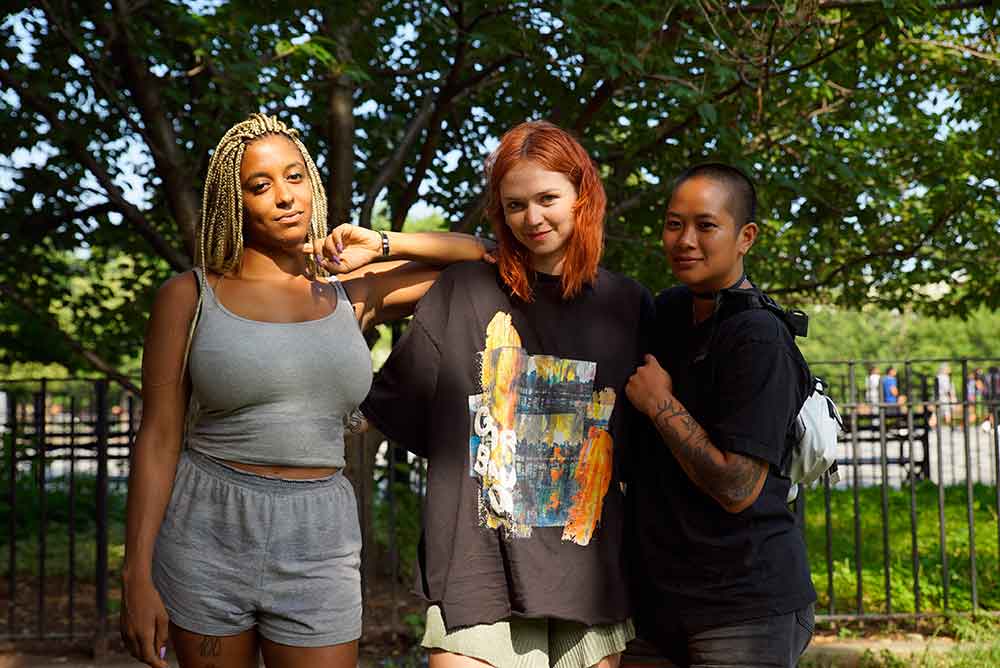 “Exclusively representing women is a political act that is tied to the hope of permanently changing the music industry.” There could not be a more concise introduction into a conversation than these words from Frankie Decaiza Hutchinson.

We are at the Maria Hernandez Park, in the heart of Brooklyn’s Bushwick neighborhood, where Discwoman, the booking agency that has received much attention for its refreshingly direct communication and its all-women DJ roster over the last two years, is located. Alongside Hutchinson, the agency is managed by Christine Tran and Emma Burgess-Olson (better known under their stage name Umfang or as “Technoalien”, as she affectionately is called by her peers). The three of them see themselves as voices for female producers and DJs who otherwise would not have a voice. And that is why Christine insists that although they use the opportunities of the collective to push everybody, i.e., to use the agency’s reputation and the higher level of popularity of some DJs from the roster during booking negotiations, but “basically it’s always about allowing the individual artists to shine.”
The excitement and the attention for the agency is a bit weird to them. While performing a theatrical gesture, Hutchinson notes: “It is a bit too much. To be honest, we would be delighted if there were more agencies like ours. We don’t have a big team, we don’t make a lot of money, and we can’t take in as many artists as we’d like to. More agencies need to take advantage of the opportunities that lie in the difference.” 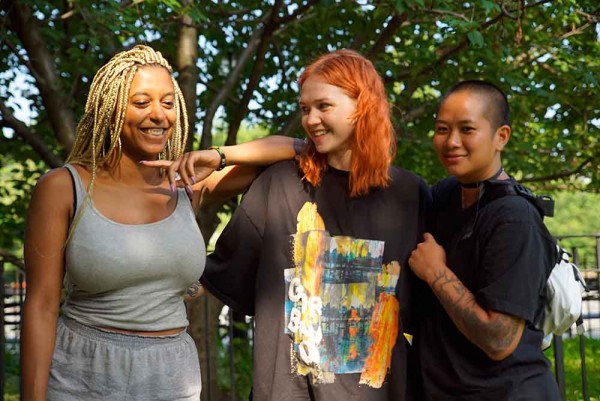 When asked what an artist must have to be considered for the Discwoman roster, Hutchinson answers: “For us, it’s not about what others think. Booking can have a lot to do with popularity because you literally have to get people through the door, but that doesn’t mean that we choose people based on whether we would get them booked. We are ready to face the challenge of questioning every standard. Our aim is to counter people’s expectations.” Burgess-Olson stresses that they would only work with people who understand Discwoman’s identity.
Which is why it’s time to take a closer look at the roster. Apart from Umfang, Ariel Zetina, Bearcat, Bonaventure, Ciel, DJ Haram, Juana, Mobilegirl, Riobamba, Serena Jara, Shyboi, Stud1nt, and Ziúr, among others, are to be found there, “All these people have a distinctive sound,” Burgess-Olson acknowledges. “Their mixes stand out, they are profound.”

Of central importance for Discwoman’s genesis and understanding is her geographical and emotional home Brooklyn, the New York office that has been flooded by waves of gentrification over the last decade, yet still remains a melting pot of cultures and an inexhaustible resource of new cultural stimulation. This is where the three met at the Bossa Nova Civic Club, where Hutchinson is working as a booker in addition to her job at Discwoman.
Emma explains: “The concentration of a wide variety of people here is higher than almost anywhere else in the world, which is why the potential for things that can happen here is also very high.” Christine adds: “There are so many creative people here and so much space which allows for a variety of identities and sounds.” As it is often the case in conversations with these three, Hutchinson has the last word: “Brooklyn is a magical place. I’ve been living here for ten years, and I’m still experiencing moments that take my breath away.” Only flaw: Since the real estate market in New York is a shark tank, Discwoman do not have their own office, which is not at all a satisfying situation, but unfortunately it is simply unaffordable. And that’s why they meet in cafes, in the park or, although this may seem absurd, hold Skype conferences between their apartments, which are just a couple of blocks apart. 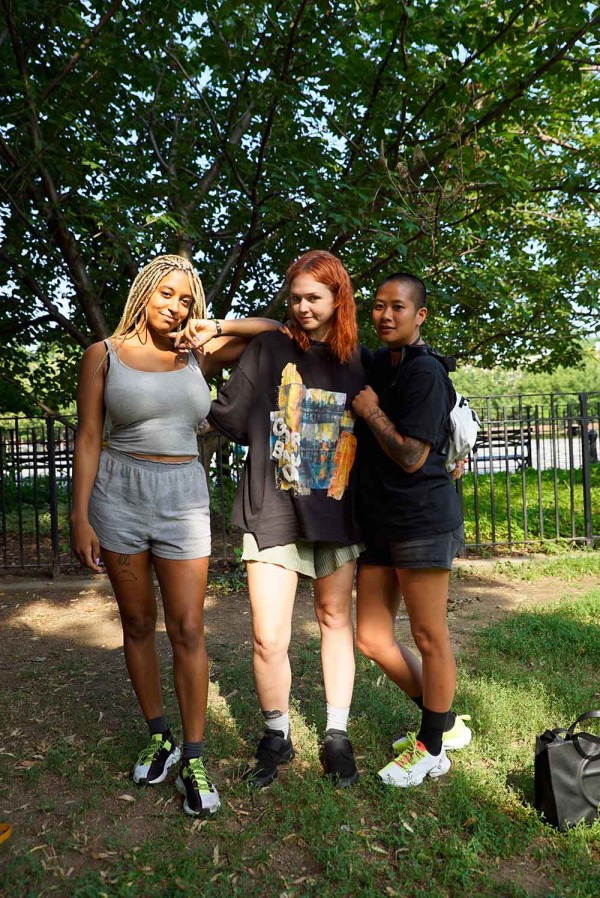 They are pleased to report that they can already see the first positive effects of their work in New York. “The scene has changed dramatically,” says Hutchinson. “There are a lot more women in the lineups than just a few years ago. But you can never forget that it’s only like this here in New York, in the rest of the USA the situation is still very different.” Because the circumstances are far from being improved, as the agency’s daily routine shows. This begins with individual emails, which make it clear that the bookers are only knocking because of the hype and have not really understood the concept behind Discwoman, and ends in the contact with the major festivals and clubs, “where people are not interested in the changes that are currently taking place, but only in money,” attests Hutchinson. But in the end, even they ” can’ t avoid getting involved in what is happening out there if they want to remain relevant,” Burgess-Olson notes with healthy self-confidence for the world in transition. However, like so many others, Discwoman still have to fight against the fact that there are still far too many men in decision-making positions who don’t understand a thing. Men like that strange guy who ran into Hutchinson in Berlin the other day wearing a Discwoman shirt – but instead of revealing himself as a fan of the label, he stupidly provoked her by telling her that he had been to a showcase of Giegeling, the label collective consisting mainly of men, whose head Konstantin stood out last year due to misogynist remarks. “Out of stupidity or on purpose?”, wonders Hutchinson? For Burgess-Olson, this is definitely a European phenomenon: “Right now you can’t ignore and avoid politics in America, but in Europe, you can. That’s why I often notice that in countries where the government takes care of the people, they often don’t understand that we’re not just about music.” In turn, however, Discwoman are defending themselves against expectations of them that are too high. “People are asking so much of you – often things that are outside of our area of influence,” Burgess-Olson comments vigorously. “For example, if we cooperate with a brand, they are denouncing us…” – at this point Hutchinson excitedly interjects: “We never pretended to operate outside of capitalism, because that would be fake!”

No, Discwoman do not want to give us false truths, their whole behavior is decidedly real – and also realistic. “You can’t change the world at once,” Burgess-Olson sums it up. And so she is gradually working to further change the circumstances, with Techno Mathematics (her expression for equal pay for all) and Equing the Lineup (the equal representation of women and men). An important lesson: do not just try to fight all the time, but also take breaks to analyze things calmly. They have already become smarter, Tran notes, they have a better understanding of how to use time effectively. Burgess-Olson concludes with the most satisfying, since self-mocking remark: “We no longer have to prove ourselves every day. We’re now gatekeepers ourselves. This takes a lot of pressure off us.” 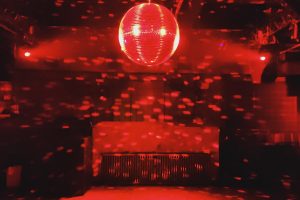 Clubs in times of Corona / Covid-19

In times of Corona/Covid-19 clubs face a cruel and uncertain future. That said, we want to give a li… 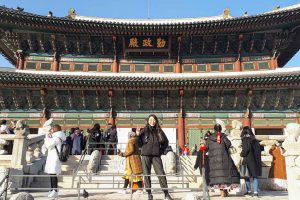