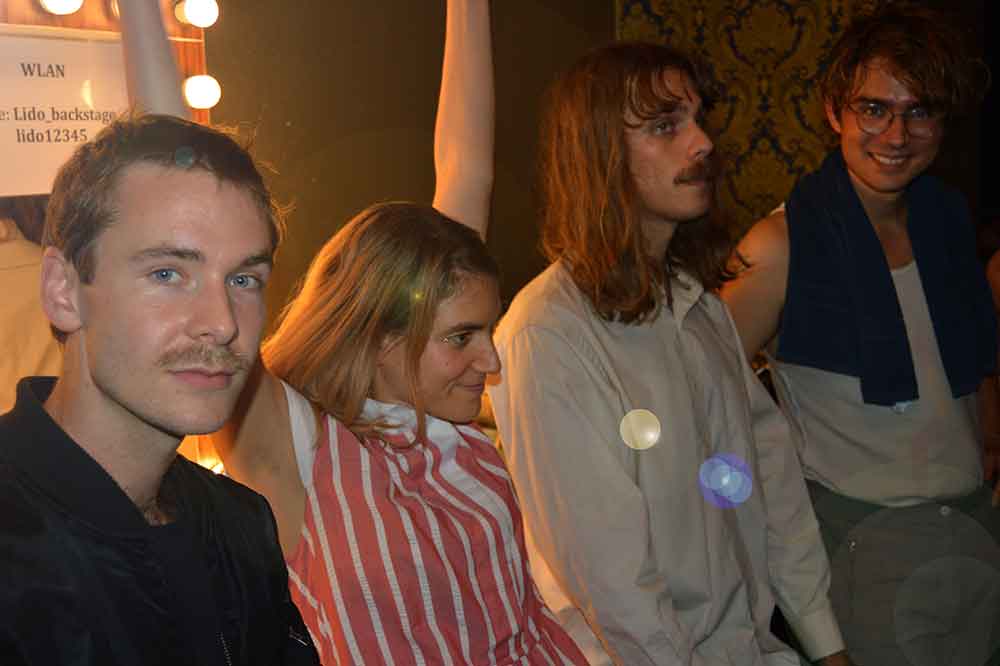 Over the course of bringing something new into being, at times there is the need to shift gear and withdraw from the rest of the world. Following this policy, Fenster backed out to produce their fourth album in a receded manner: Only the four of them coming together as a collective to live together, eat together and play music together until there is a carpet of sound that’s mixing up psychedelic experiments, tripping grooves and playful pop excursions. Barricading themselves in “The Room” has been the starting point of the record (released on Altin Village & Mine) and washed ashore its title.
But after withdrawal comes return, so it’s time to say knock knock: Who’s there? It’s Fenster, answering the door and giving you entrance to their room. Lisa Schmidt-Herzog met band member JJ Weihl to talk about humour in music, inequalities in pop music and the intricate status of Berlin in terms of diversity.

JJ, good to see you on your day off. You’ve been playing shows for some weeks now. How is tour life going?
JJ: It’s been a speratic start to the tour because we were playing shows in Germany and Belgium but after every single one we were coming back to Berlin. Earlier this year we went from L.A. to the South West of Texas and back to play shows on the way. The South by Southwest festival is absolute madness, but it was our third time and we knew what to expect. Every band in the world seems to be there and you feel like a super tiny speck of dust getting blown around. You’re running from place to place, there’s nowhere to park and the sound is always terrible. Everything is sponsored by Ray Ban and Doritos and the place is packed with garbage and energy drinks everywhere. It’s like a dystopian corporate nightmare but we even managed to enjoy it this time (laughs).

The U.S. is a huge kick in the ass for European bands, isn’t it?
It definitely is! When you’re touring in Europe you get used to long soundchecks, comfortable circumstances and great hospitality. In the U.S. you have to perform as if your were doing extreme sports or serving a military training. But it also welds you together as a band and this time we could relax because we knew it was gonna be like that. Also our hosts were super sweet this time. We slept at the local weather man and his partner who raise rescued dogs, one of them having a huge fanbase on Instagram (laughs). It was the first time that we travelled the west coast of the U.S. I’m from New York but California felt like a whole different country even to me. 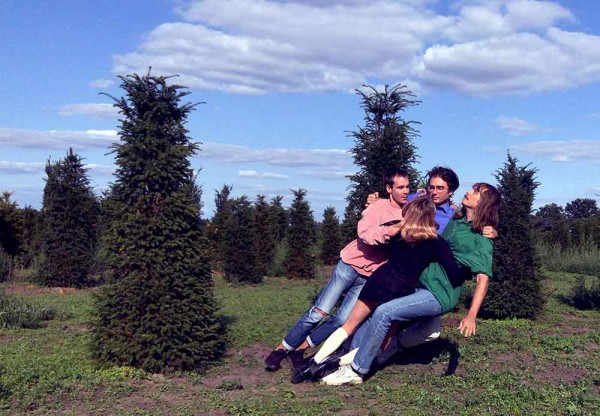 Fenster falling to the right

You and Jonathan founded the band in 2011. Comparing the four albums that you released there is a noticeable development from a slightly folk sound over a more dark and psychedelic style up to easy groove numbers. What was important to you when recording the new album?
“The Room” is the first album that Johnny, Lucas and Elias and I have made together, so it’s kind of a new beginning for the band. Until this moment the constellation has been changing and we were finding ourselves but now it feels like a solidified group. It’s like we found our Ringo! The approach was deeply democratic because the idea was to write every song collectively together: One group, one room.
We explored our styles in a way that wouldn’t have been possible if we had come together with finished ideas and arrangements. There was this house in Italy where the record finished and we spent all of our time together, jamming, staying up late, eating pasta everyday. The process went on very slow but it was intense and prolific.

When I first listened to the single “HAHA lol” I was like: Haha. Lol. Do you think there is a lack of humour within the music industry?
As an artist you can get caught up in taking yourself too seriously. That’s not only an issue of the others, we do that ourselves as well but we’re also completely silly. When we recorded our last album “Emocean” it was also the soundtrack of a movie we made with the same title (which will be released on DVD this year). The tag line of it is: What if life was just a joke? Reality is a very tenuous concept! Within our music and by means of humour we explore these questions in answer to all the confusion and weirdness that life holds. Being alive is funny … though I cannot recite any jokes. 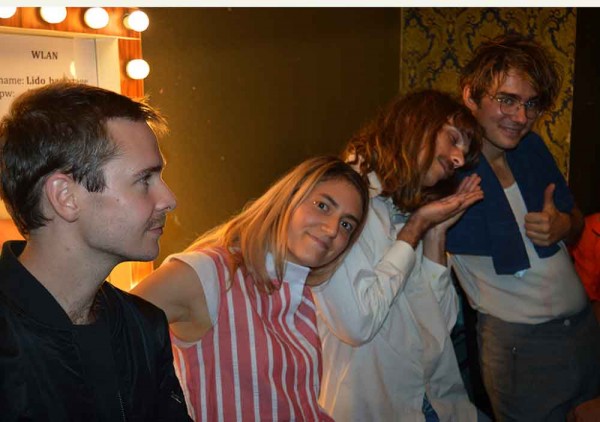 I can! But I don’t know if it works in English.
You can tell it in German!

Okay, was ist der Unterschied zwischen Bierflaschen und Gefühlen? …  Bierflaschen muss man öffnen und Gefühle muss man zulassen!
Hahaha, my problem is that I hear them, laugh and forget immediately. But joking is essential to all of us. Anyway I cannot even say which sense of humour is prevailing. We try to keep it pretty universal around the Fenster headquarters!

Which musicians have contributed most to your personal musical development?
I grew up in New York going to a lot of live jazz concerts. At the Village Vanguard there were all these old dudes playing the saxophone. Even if I didn’t fully understand what guys like Lonnie Smith were doing I got the idea of a pure expression of music, instruments as extensions of their players’ bodies. I listened to The Beatles when I was younger, I got into grunge and into experimental sounds like Laurie Anderson and Kraftwerk. At the same time I always loved Mariah Carey, Janet Jackson and Madonna! I never discriminated between genres. As a band we all have different influences but also cross sections like CAN. Holger Czukays playful approach in general is an incredible inspiration.

Besides these shared impulses, you approached to music quite differently. Elias studied drums, Lucas received a clarinet education, Jonathan learned the classical guitar as a kid and you taught yourself how to play the guitar after getting annoyed by the piano. You are all channelling your energy into other projects as well, aren’t you?
Yeah, we’re all working on other projects some of which are solo. Lucas started up with “World Brain”, Johnny released a record as “John Moods”, Elias plays the drums with “Trucks” and he’s touring with “GURR”. I also got into producing my own material which I have played for a few times. But I’m not that interested in making an album as “Discovery Zone”, I prefer to view it as an experimental audio visual project.

Regarding you own experiences, female proficiency in music production still isn’t considered as usual as male by no means. How do you perceive the standing of women in pop music?
In fact, in our six years of touring we encountered less than ten female sound engineers working at the clubs. But also the band thing itself is so male dominated that some journalists seem to deem it necessary to apply a whole sentence on what I was wearing during a show. Sometimes people assume that I’m the manager of the band or the singer. Such things aren’t always present and visible but you definitely encounter saliences. We’re not living in a totally balanced world and there are lots of problems within the music industry in terms of equality and diversity. 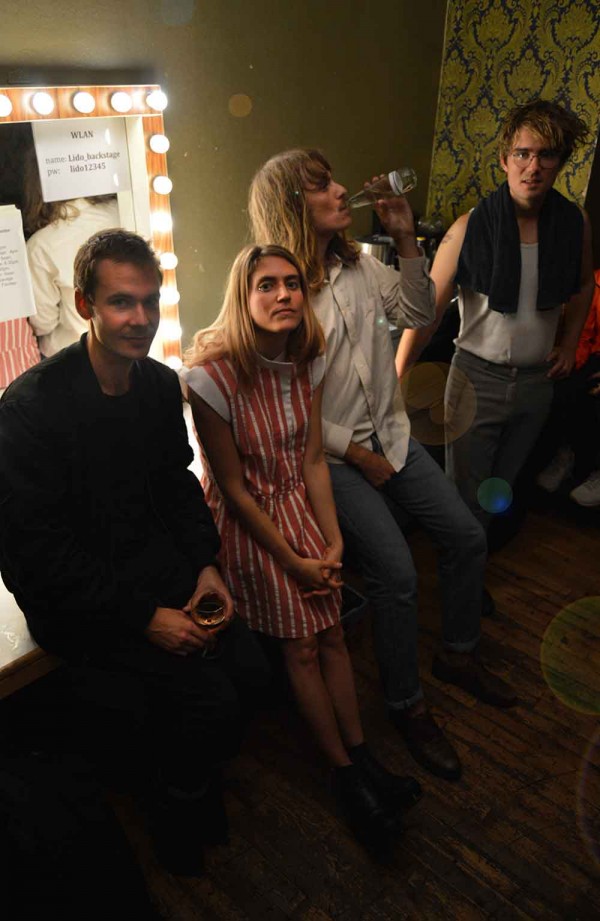 Plus, Western Europe is a special field in this context as well.
Yeah, also for that matter Europe is quite different to the rest of the world. Of course, when you put an eye on cities like New York or Los Angeles, you will find quite a different understanding of diversity, so that the variety of nationalities, faces and bodies is undeniably larger. But that’s the nature of these international places. Taking the example of Berlin, it’s a European capital but there are limitations in terms of inclusivity. Berlin can be tricky, it is a German city with “Ausländer” in it. You can definitely find multiculturalism in some aspects but it’s not a melting pot. Even though here is this huge influx to the city which is also nourished by art tourism and a certain scene that announces Berlin as the ultimately open minded city. Nevertheless, it’s possible not to feel so much home here because not everybody is welcome and it depends on your own perspective to what amount you’re able to realise this. Lucas, Elias, Johnny and me, we are from different countries but we all share a particular privileged background. It’s important to be aware of that as much as possible. 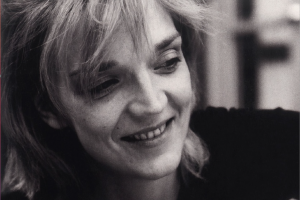