“We just put everything on the internet for no reason”

Greta Kline’s family background can be summarized in one word: Hollywood. She is the daughter of the actors Phoebe Cates (“Gremlins”, i.a.) and Kevin Kline (“A Fish called Wanda”, i.a.). That information might definitely be useful as a great hook for a story – but it is irrelevant when one is trying to illustrate the musical talents of 22-year-old Greta Kline from New York City.
Let’s rather put another fact into the spotlight: As Kline is a little obsessed with the online platform Bandcamp, she released over fifty demo albums on the internet, while using different aliases like Ingrid Superstar, Franklin Cosmos or Frankie Cosmos. By now, Frankie Cosmos turned into a real band – and it will be the topic of this very text. FLORIAN KÖLSCH met Greta Kline at a concert during her European Tour in Metz. She talked to him about her recent album “Next Thing”, about growing-up, the “world wide web” and some other things. 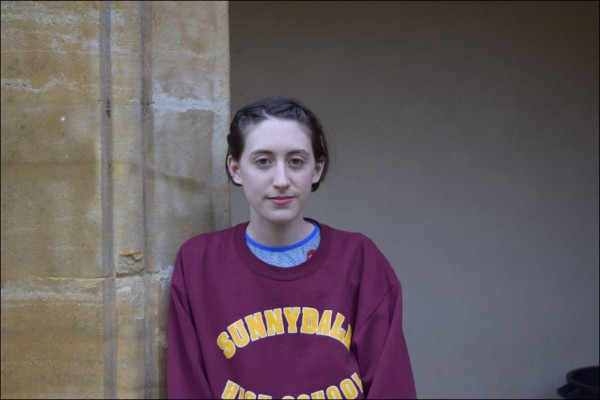 Is this your first European tour?
Two years ago, we played shows in Germany – but technically, it wasn’t a tour. We played so many places. I think we placed in twenty different cities – it was really wild.

In the lyrics of “Next Thing”, you talk a lot about past events. Did this process of looking back on things from your teenage years help you overcome adolescence and turn into adulthood?
Yes, I think “Next Thing” made me think a lot about my life. It made me feel more adult and more mature. I’m in my twenties now and look back with new perspectives. By now, it feels weird singing about being a teenager as a 22-year old.

Especially when you sing the song “I’m 20”.
Yes, I think that’s really funny. The day the album came out, I announced that song on stage and said: “I wrote that song years ago and it came out today”.

It’s like Adele who released her album “25” when she was 27.
It’s such a long process to put out a record. It makes sense. I was thinking about Taylor Swift too, she has that song “22”. She must have finished that song when she was older than 22. 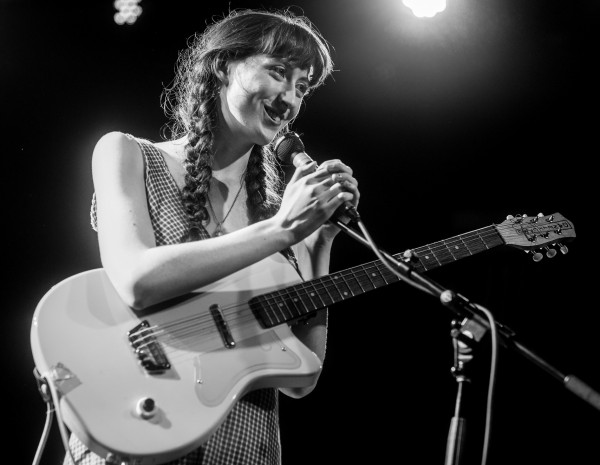 You released about fifty albums on the music platform Bandcamp. When did you decide on making your music accessible to the public?
I was putting it on the internet just for my friends basically. So it wasn’t a conscious a decision. It was just a way to put it somewhere. I did not take it very seriously. I did not think of the fact that once it is on the internet, people can access it. It just kind of happened. I think it is just my generation: We just put everything on the internet for no reason.

What made you realize that your Bandcamp profile became more popular?
There was an album that I put on Bandcamp that someone posted on Facebook. And I could see on Bandcamp that it was listened to – that was surprising but also scary.

Would you refer to your Bandcamp releases as actual albums? Or rather as demos and ideas?
I call them albums but I also call them demos. Nevertheless, a lot of them are just really basic ideas.

Your songs are really short – they have an average length of about two minutes. Is that a concept of yours?
I just write the song as long as it needs to be. If I felt like I needed more time to get my point across, I would make a longer song. Some of my newer songs are slightly longer – they are for the next record we’re making. It just depends on the subject matter. I like short songs. I like listening to short songs. My attention span is not that long and I think I am not into repetition. So, I just like being to the point.

Some of your songs remind me of the Ramones. “If I had a dog” for example has something very angry to it. How much “punk” is in Frankie Cosmos?
Yes, I would call it a punk song – kind of. I don’t know, but maybe people would not like me, Frankie Cosmos, being attached to the punk genre. But I think that I have some punk attitudes that come out in some songs.

Speaking of genres – in another interview you mentioned that genres became obsolete after Kanye West sampled Arthur Russell [Note: Russells’ song “Answers Me” has been sampled on West’s “30 Hours”].
Yes, I always think genres have been kind of irrelevant. We were talking about it in the car today: There are people saying that they like a whole genre of music and I think that’s just way too broad of a statement. I like Rock ‘n’ Roll but I do not like every Rock ‘n’ Roll band.

When I told people I would go to a concert of Frankie Cosmos and they asked me what kind of music you are doing – I could not really give them a straight answer in terms of genres.
Me neither. I never know what to say. It’s like nothing has a genre in 2016. We all have access to so many different kinds of music and we’re all inspired by so many different things. I listen to really different music than my band members listen to – and we are all still able to make stuff together that is one thing.

In the video for the song “Art School”, you play a girl who obviously is obsessed with Justin Bieber, which one could interpret as an ironic side blow to the people who don’t seem to take you for serious as you’re a young girl in the indie scene. Was it your intention to play with these clichés in the video?
Yeah, it was part of it. I did not direct the video so I cannot take the credit, but part of the idea was for me to make something about obsession and fame. Those are interesting concepts and Justin Bieber is the face of that kind of fandom. But the real reason we made that video was to make a second video that came out after, which was like a “YouTube Reptilian Race Frankie Cosmos exposé”-video, which we faked. It is a fake character on YouTube, pointing at all these things in the “Art School”-video and trying to proof that I am a reptile. Speaking of videos – I would recommend you to search for the video “Frankie Cosmos Reptilian Proof” on YouTube. It’s a fake-video in which we planted little hints, which should proof, that I am a reptile.

Seriously?
The girl who directed both of the videos is just amazing. She takes on this whole phase of people saying that Justin Bieber was a reptile. It’s hilarious. I just thought the things that happen when you are famous are really funny. And I wanted to make people think that I was famous enough to have people thinking that I was a reptile.

You mentioned earlier that you have new songs for an upcoming record – did you already start working on it?
Yes, we’re about halfway through arranging it. I hope we can start recording stuff within a year.

Sounds great! Is there already a name for? Something like “The Next Thing after Next Thing”?
I did think it would be really funny to make an EP called “New EP” and then make another album called “Next Next Album”. But I’m not going to do that.

One last question: Do you have a favorite album these days?
Uh. I have been listening a lot to “Cherry Peel” by Of Montreal. It’s a really good album.