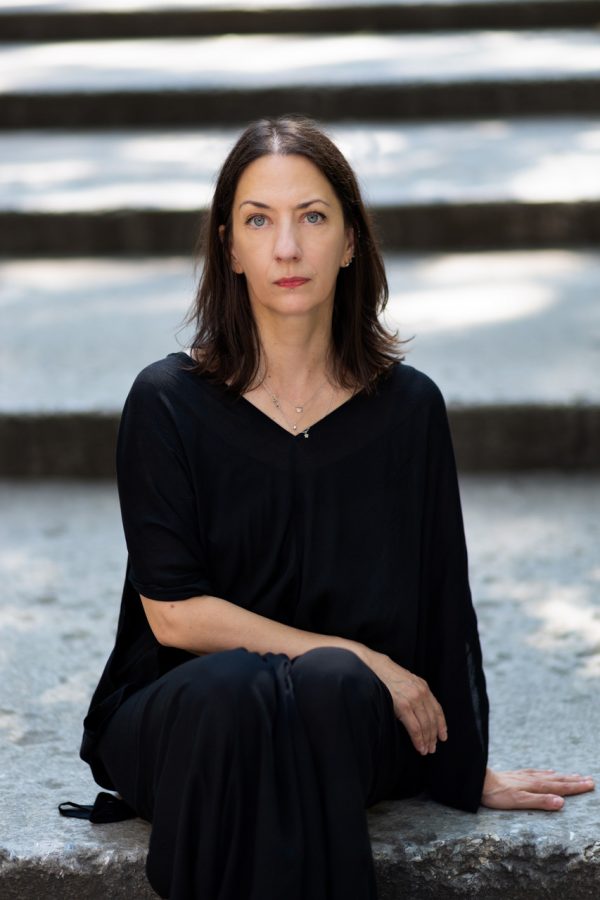 Sometimes music hits you like a lightening bolt. The album “Character” by Julia Kent had this effect on me. I discovered her music by chance in 2015, browsing through different friends favorites lists and after clicking on “Ebb” was unexpectedly transported into a realm of composition and sound that seemed so intensely flawless I was shocked. I had found music by somebody else that seemed to express exactly how I experienced and felt our world. The fact that cello had never really captured me before suddenly seemed ludicrous and I bought all of her albums immediately and for months I could listen to nothing else.

Not only the warm, vibrant sound of her instrument made me feel unbelievably joyous. Her technique of working with loops, subtle field recordings and electronic sounds were more inspirational and exciting than anything I had heard for ages. Ever since that day her music has been an important and integral part of my life, she has inspired my lyrics, my art, my music, my moods and taken me by the hand into sound landscapes that have soothed my soul and brought relief in these confusing and sad times.

This year in January she released a new album “Temporal” which has amplified her orbit of vision and profundity. The compositions are so intricate and meaningful that it seems unbelievable a complete orchestra is not needed to perform them. The mix of wonder and melancholy is almost overwhelming and once more exactly how I feel about our world at the moment. A dreadful grief that we may all be swept away in a wave of avarice and materialism, destroying this glorious planet possibly forever. “Temporal” is solemn. Her usual waves of jubilant, tranquil sound, reminiscent of a cool, clean ocean, have become heavier, burdened, thoughtful and this pensiveness seems appropriate. Her compositions feel like a stream of consciousness moving through our world, mirroring the dark and the light. Sunlit songs like “Floating cities” or the tinkling of small bells and chimes in “Through the Window” sparkle out of every shadow, making me think of Leonard Cohen lyrics “Ring the bells that still can ring, Forget your perfect offering, There is a crack, a crack in everything. That’s how the light gets in.”.

I believe that artists, who remind us of light in the dark, are the great ones and I feel incredibly honored and thankful to be able to present Julia Kent here today. 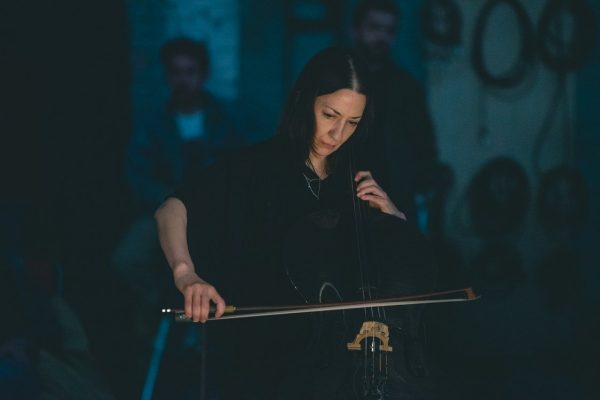 Danielle De Picciotto: What is it you look for in music Julia?
Julia Kent: For me, the most important aspect of music is the way it can communicate. It’s a cliché that music is a universal language–but music is, in the end, the only way we can speak to one another without words, and sometimes bridge divides and find commonality that way. With the music that I make, I’m always trying to communicate emotion in the truest and most direct way I can and hoping to connect on a human level. It seems so important, now more than ever, to try to do that. And the music I listen to the most tends to be music that conveys something that transcends language.

When did your interest in cello start? Where you classically trained?
I started playing cello around the age of six, and I did study classically for many years. But, though I’m so grateful to have that background, the world of classical music was not the right place for me. I feel really fortunate to have been able to find my own creative path.

How did you find your own voice? Did this start with loops or was it the result of different experimentations?
It took me a long time to find my own voice, and technology was a big part of that. In order to be autonomous on stage I had to figure out how to create the sounds I wanted by myself and it took a lot of experimenting with looping and software to end up with a result that worked for me. It was a big learning curve to figure it out. But I find it endlessly interesting, and empowering, to learn about and to interact with technology: it can be frustrating sometimes, of course, but it’s such a powerful tool. And one that is constantly evolving. 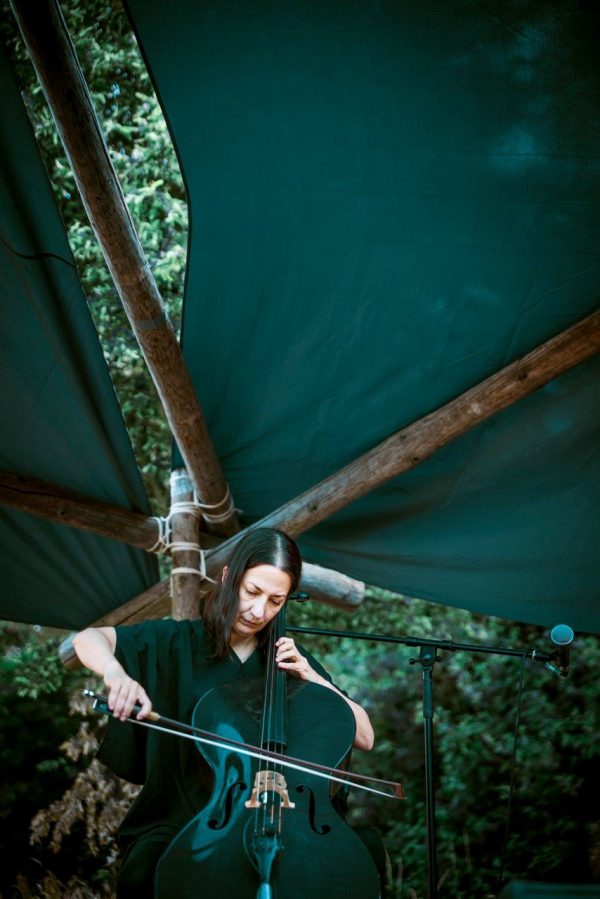 How does your perspective change from album to album? Is this mainly an internal or external development?
Each of my albums has had a concept—some more internal, some external. The new one, “Temporal,” is made up mostly of music I originally created for dance and theatre and I think is maybe the most outward-looking of my records, because many of these pieces had their genesis as responses to text or choreography. So, in a way, it’ might be the most “collaborative” so far, even though the collaborators weren’t directly involved in the making of the record.

Was it difficult to enter the music scene as a female solo cellist in a non-classic environment?
I feel privileged to have mostly been fortunate enough to work in collegial environments with inspiring and respectful people, whether male, female, or nonbinary. But, of course, in the music world, as in the rest of the world, the power structure is male-dominated and, as a woman, there are barriers to entry and prejudices and preconceptions that can make things difficult… as we all know!
I hope that’s changing? There are certainly some initiatives going on that might encourage that change, and a lot of amazing women who are working towards it. And, separate from that, there’s also the inherent value system and perceptions that are involved when you play a classical instrument in a nonclassical way. But I feel as though I’ve found space for myself in both respects. 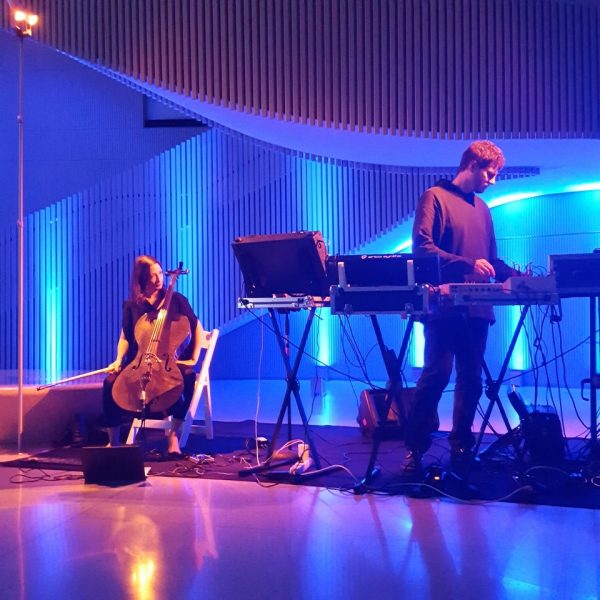 What is the difference for you in collaborating with other artists in comparison to playing solo?
I’ve been so fortunate to have had the chance to work with so many amazing artists. It’s been an incredible musical education. I try to learn from everyone with whom I have the chance to interact, both in music and in life. And, certainly, I’ve learned a lot with the people I’ve been lucky enough to work with. Entering someone’s musical world and having the chance to be a part of it is such a special experience.

You have just released your 5th solo album. Do you record in your own studio or pick different places, cities to inspire you?
I always record at my home studios: one in New York City, in a neighborhood where it’s becoming increasingly difficult to deal with the chaos and noise of development, and one in Hudson, New York, which is more tranquil–for now. I love the intimacy of recording in my own studio environment and the ability to take chances that that provides. But I’m also inspired by the cities and places that I visit. There’s something about joining that stream of human energy that you find in a city and feeling the energy that the people who came before have left behind.

What are your plans for the future?
I have some shows coming up in New York and in Europe in connection with this new record, and some film projects I’m currently working on. Also I’m collaborating with a Greek composer on music for a very interesting theatre piece that addresses the Oedipus story from a neuroscientific perspective. And I’m collaborating on music for a dance piece by an American choreographer that’s inspired by the life and work of Alan Turing, which also explores the nexus of technology and performance. 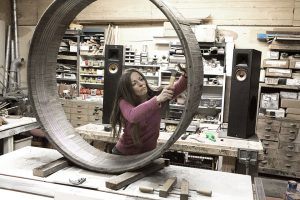 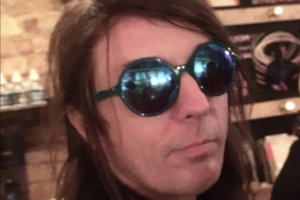 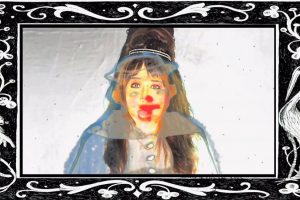 Danielle de Picciotto: “It is very difficult for me to separate my art from my everyday life”

"I am an interdisciplinary artist and always move between sound, color or language. If I neglect one… 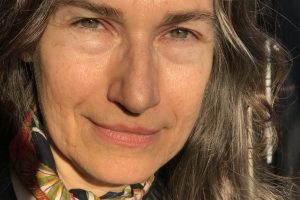 Mary Muszynski: “Find beauty in the place you are in and then amplify it!”

"We need natural beauty at home and in our urban common space. My plan is to keep making thoughtful …