YPY: “No comment. Everybody has one secret at least.”

Osaka based producer and DJ YPY (aka Koshiro Hino) released his new album “Be A Little More Selfish” on EM RECORDS and will be touring Europe during July and August. We catched up with the charismatic musicians recently to talk about his bewitching new record:

Koshiro, to which degree do you see your recent solo works on “Be A Little More Selfish” connected to you minimal band goat?
I ask as to me the opener „Guilty Pants“ comes with a similar let´s call it hypnotic rhythm aesthetic, and also a track like „Resom Plants“.
Recently I incorporate the composition method I’ve used for the goat’s pieces into YPY’s, that’s right. And yes, “Resom Plants” is a piece representing this. But sometimes, on the contrary, I try to use some rhythm works by YPY for goat.
The final tune of the album, “Games #2 p-type”, was originally composed for a Japanese percussion ensemble called Kodō by working in the tradition of a goat piece. I did rearrange the rhythm work for this YPY tune.

But the main difference: While for goat kinda academic Minimal Music seems to be the most significant reference, your solo works comes with a very clubby approach.
How do I have to imagine the production process, do you have a certain audience and a certain performance environment in mind while working on your music?
With goat, the process of my composition is based on a mixture of what I’ve developed and studied by myself and references I make to techniques of others. I think it’s easy to produce a tune that sounds very “complicated”, but the difficult point for me is to manage a balance of complexity (diversity) and simplicity. To work out these two different aspects better, I take rhythms which are popular in club music and work from there.
For producing YPY music, I admit it’s difficult though, I intend not to have any ‘basic idea’ about it. But these days I’ve had a lot opportunities to do gigs at clubs or live houses, so I’ve produced dance music basically. At preparation for those live gigs, I consider the venue, the sound system, the atmosphere, etc for producing the tunes. Because dance music will never be formed by music only, I think it should be completed with feeling and vibes of place and audience.

That said, „All Wounds“ to me sounds like the perfect track for the early morning hours at a techno party when everybody is already pretty transcended. Is this a picture you feel happy with?
I think that´s one side of the tune.It’s also a good opening tune at a club night, isn’t it? Personally I like this tune the most in the album, I guess you will gradually feeling good and high from the later part of the tune, if you listen it more closely. I’m very happy if you would listen to it in that way.

Your album comes with quite a very special structural narrative, outlayed over five tracks – two of them over ten minutes long, two of them around seven minutes long and one short kinda interlude.
It might sounds weird mathematic-analythic here, but to me it feels like this time-framing is of high importance for the deeper essence of the album. Right?
To be honest, originally we planed to release these as a single. But there were some discussions with Koki Emura (of EM Records), and as a result it is now a full album with such a subtle combination of long length and short length. I’m happy to know you mentioned that sensitive point.

Koshiro, you are well known for working with casette recorders (in the studio and live). Would you say this is something people are able to hear that on “Be A Little More Selfish”?
I’m not sure you could hear this all through my productions, but for sure you will be able to get some taste of cassette tape.

It´s around four year since you released your last solo album „Zurhyrethm“ – in the time in between you worked and toured quite intense with goat, you cooperate with the theatre performance project Antibodies in Kyoto as well as with your own art group project “Virginal Variations” and last but not least you experimentate with sound installation ideas with your project “GEIST”.
Looking back on this time period – how did all those influence make “Be A Little More Selfish” different than Zurhyrethm“?
What stimulations do you get from all those projects and how do you bring them in your artistic creation process?
Exactly, those projects influenced me, but it’s quite difficult for me to describe clearly how. Sometimes I use the ideas that I got through YPY’s production for other projects. Basically it is like that: During my work for a specific  project – except YPY –, I concentrate strictly on that and am note able to do any other project at the same time. It’s often very hard mentally and physically for me during the production process, but once a project is finished, I am able to produce YPY music in a very nice condition and with the feeling of freedom and achievement and in a creative manner. There is no particular rule to produce YPY’s music. For YPY I can do anything at any given time. It’s pure pleasure to me – and that makes me very creative. I think it’s great incentive for me.
When I produced “Zurhyrethm”, I didn’t have either any good production skill nor knowledge, so I just did it only with my ‘early intention’. Through experience for some years, gradually I realize I can produce what I want in music these days, though it’s still only ’some’. 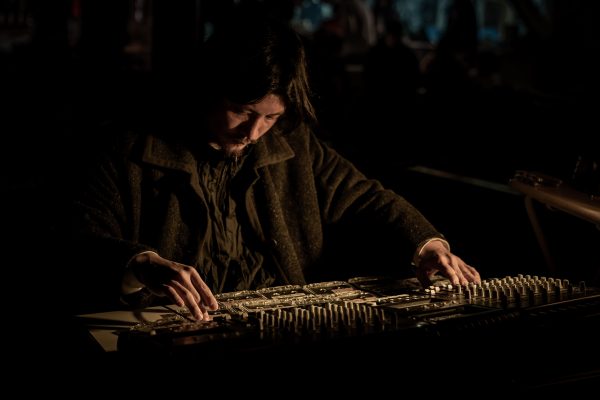 Coming from a project like Virginal Variations” and the cooperation with Antibodies where you work together with a large group of people (up to 20). Is it easy to switch over to a singular working process? And how do you experience the differences?
Antibodies is just an aggregation of individual artists and performers, so I don’t think they are a group or team. I always focus on how I can develop the thing I do in that. At other projects, I do mostly things by myself including direction and composition. One has to clear a lot of processes to archive one idea, it’s not as easy as: 1,2,3. Eben tho you are only responsible for a little part, your preparation and resolution to the composition should be pretty important. But it’s very special to archive representation that a lot of people are involved in.

Koshiro, you seem to care a lot about the titles of your tracks: „Guilty Pants“; „It´s Not So Bad I think“, „Resom Plants“, „All Wounds“ and „Games #2 p-tpye“.
Do you have stories for all of them in your mind?
I intend to insert funny sense into the title. It’s not all but I have particular intensity for a few titles.

And are you curious what we, the listeners are getting from those kinda story fragments you share with us?
Yes or no. It doesn’t really matter with me.

I don´t wanna urge you to open all boxes here, but who is the person wearing those guilty pants and why so?
No comment. Everybody has one secret at least.

You are based in Osaka. How does the local scene feel these days to you?
I guess I’m not so close to the local scene anymore, because I focus on my stuff for few years. But I think younger generation are becoming active these days. I’ve lived Osaka over ten years, I was lucky that I could get direct influences from Kansai local scene inclusive Boredoms. I think I’ve been basically introverted, but it’s their influence that I could try to express myself to outside though music.

You are coming over to Europe in July and August. What are we able to expect?
As usually I’ll use two cassette decks. But I’m sure every performance will be changed at each venue and gigs, so advance information will be mostly meaningless.

Whats you favorite record of 2019 so far and why?
Hard question, but I like Whodat & Viola Klein on Workshop, Nakara Percussions on Komos Jazz. Also looking forward to new stuff by Burnt Friedman and Oren Ambarchi.

Kaput reported first about YPY in our big Osaka-Kyoto-Story two years ago.

Available via Em Records and Bandcamp.