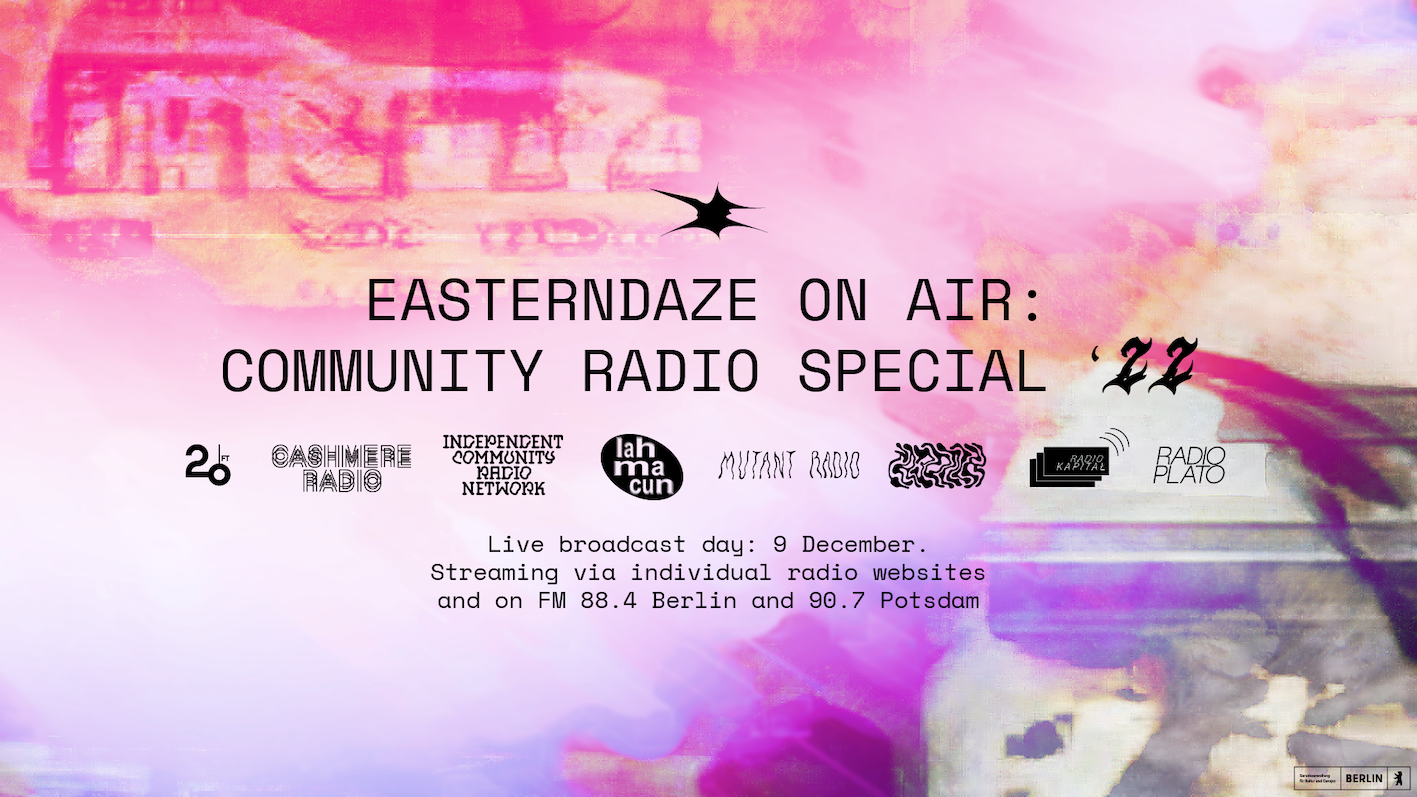 On 9th of December the second Easterndaze On Air radio day is about happen. Community radios from Central and Eastern Europe will connect through the Easterndaze x Berlin platform, in cooperation with Cashmere Radio, in an effort to encourage collaboration between these DIY mediums.
Lucia Udvardyova, Matteo Spano and 𝐈𝐞𝐯𝐚 𝐆𝐮𝐝𝐚𝐢𝐭𝐲𝐭𝐞 answered some questions ahead of the broadcast event.

Lucia Udvardyova: Easterndaze On Air is a project that basically came about from the pandemic and the impossibility of doing physical events. In April 2021, we organised a week-long radio community marathon, where radios exchanged moderators, interviewed each other, and created a special programme for the live broadcast (including a speculative radio play).
This time around, the collaboration grew into eight community radios from Central and Eastern Europe, with Berlin’s Cashmere Radio as the coordinator and host of the initiative. And we will have one live broadcasting day, where each radio is participating with a special show introducing their region and the radio, as well as a panel talk focused on the topic of community radios and the current socio-politial and geopolitical issues, moderated by Ieva Gudaitytė. We feel all these radios play a crucial part in their respective country’s often dwindling media landscape (Hungary, Poland, etc) but they are also globally connected at the same time.

Matteo Spano:  The radio network emerged from the previous edition of Easterndaze, and thus through Lucia’s contacts and willingness to put together similar projects across Central and Eastern Europe. Following the exchange in 2021, contacts were maintained and on several occasions more specific collaborations took place (such as solidarity broadcasts with Ukraine following the outbreak of war). With ICRN (which in turn is already a network of different radio stations, IDA in Tallinn/Helsinki, Palanga Street Radio in Vilnius, Tirkultura in Riga), there was also a recent meeting involving Cashmere, last September, in which the topic of international (and translocal) collaboration between different radio projects was addressed. It can therefore be said that, in different formations but with similar intentions, the different radios have continued to develop relations with each other. This edition of Easterndaze is a further example of this type of collaborative practice.

How does one has to image the exchange process between them in general?

Matteo Spano:  The process changes radically depending on the context and the parties involved. At times it may be a ‘simple’ exchange of transmissions, or the retransmission of a live radio signal. At other times it may be a format in which several radios collaborate, either live or remotely – for example, it happened to be a cooking show held in parallel between Berlin and Vilnius, where each radio listened to the other radio in the course of the broadcast and shared recipes, music and anecdotes. In short, it is often a hybrid solution between presence and remote participation, which underlines the particularities of radio practice.

On the facebook event page for the Easterndaze On Air 2022 you point out the role of independent community radion for the ongoing crisis in the Ukraine as well as the sociopolitical exchange process in general. Do you feel that the political system understands that important role you play therefor adequate and you get the necessary support (logisticly but also economically)?

Matteo Spano: It is difficult to give a unified answer to this question – depending on each country there are extremely different political situations. As far as Berlin is concerned, there is not too much to complain about, as evidenced by the fact that this exchange is financially supported by the cultural department of the senate. Beyond the financial support, I would say that giving recognition to the value of independent cultural production is the task of the organisations themselves who participate in the production directly, and who therefore set for themselves the yardstick by which they decide their own degree of ‘value’ or ‘success’.

𝐈𝐞𝐯𝐚 𝐆𝐮𝐝𝐚𝐢𝐭𝐲𝐭𝐞: The main concept behind this year’s Easterndaze discussion is the idea of network: what it means to build, maintain, and belong to one. In that framework, we will discuss how (our) independent community media/radio responded to Russian invasion of Ukraine; how our Ukrainian colleagues, and how we can use our radio platforms to practice resistance, solidarity, and responsibility respectively.

What else to say?