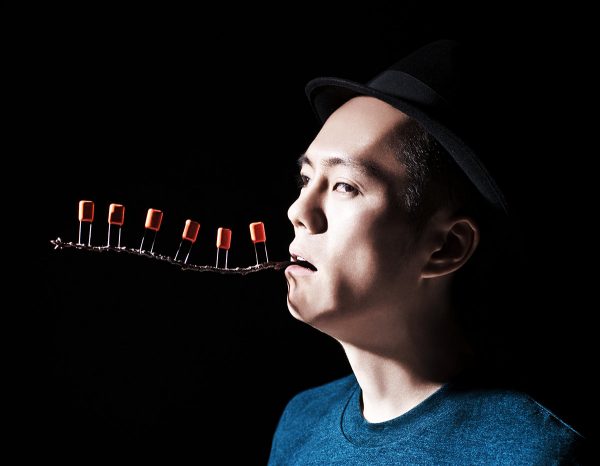 Sometimes two tracks are enough to open the wide field of imagination we all carry within ourselves but rarely listen to with the dedication we should. EM Records Osaka Japan just released a beautiful 10-inch featuring one original track of Kohei Amada and a rework by Sugar Ken.

Where the original is obviously more traditionell in its sounds and hides the still omnipresent spookiness behind the curtain of an harmonious and ideal world (at least to untrained western ears), the rework by Sugai Ken comes in with a very disturbing mix of chamber play sounds, industrial-noise-references, advanced dance elements and most of all a full on suspense feeling. Rather than Thom Yorke I would have loved to hear Sugai Ken reworking a classic Argento soundtrack like “Suspiria”.

Sugai Ken was so kind to answer some questions by Email.

What´s your personal relationship with Koto music in general and the music of Kōhei Amada in special?
Koto music is often used for advertising in the sense of  transporting a representative image of Japan, but most of the modern people are not familiar with Koto music on a daily basis since the majority of Koto music is conservative in Japan. Koto music is played in shops, restaurants, public spaces etc. as background music only in  the New Year season in Japan.
I’m not familiar with Koto music but it sounds “fresh” to me. The first time I heard Amada’s Koto music was at a party organized by Soi48 & Riyo Mountains at Be-Wave (Shinjuku, Tokyo) in 2016, where Takuya Kitamura played “Shinshunfu”. It´s him who wrote the liner notes of this release. I still remember that amazing experience clearly. I haven’t heard such a “cool” Koto music ever.

Do you have some more tipps out of his repertoir for our readers? Songs / recordings you feel are outstanding?
I haven’t heard other recordings by Kōhei Amada because none of his other pieces are available on CD or digital. My friend told me there is only one LP album has been produced by himself in 1970.

Which elements of the original version of Kōhei Amadas “Shinshunfu’“ did catch most of your attention?
I was impressed that Kōhei was trying to fuse Western and Eastern elements in his music in mid 1950s, this was even before Japanese modern music composers like Makoto Moroi or Tōru Takemitsu had yet completed their pieces fusing Western and Japanese music. His music has somehow a neo-classical approach, but rather for me, the music you can hear on “Shinshunfu” is a quite smooth compound of ancient style of music and modern SSW style – at least for my Western and Eastern trained ears.

How did you process the rework?
I gave free rein to my sense – to make sure I am not to hedged with conservative significance.

Amada is known for his love for the Irish harp ? Is this an aspect of the sound which meant something to you ? Both as a listener and as a reworker?
It was actually a French grand harp that he played first, not Irish harp. Sorry for the confusion. He is a multi-talented artist and succeeded as a musician but in general he is known more widely as a sculptor and painter. There is the Kōhei Amada Memorial Museum in Japan. You can read his information on the liner notes. That’s extremely interesting.
I respect the foresight of Amada-san.

“Shinshunfu’“ is originally an ode to the spring time and the beauty of the nature, but still there is a melaacholic subnote there – at least to me.
I agree with you. I think the subnote you felt can be explained with the Japanese phrase “muzyōkan” – the sense of the vanity of life. Also to my knowledge, the subtle sense and mood of “Shinshunfu” should be caused by Amada’s adoration to ancient world that is said he held it since he had seen a series of works by Shigeru Aoki. Have you seen his work?

Your version is very spooky, very dark? Are you able to explain that dramturgic twist?
Sorry it is difficult to explain in words, because I prioritized the acoustic interest.
By the way, I’m lurking them in the sound as gimmicks, such as the lyrics that Amada’s masters made, and the words that represent “Spring” are expressed by Morse code etc…

Are you currently working on a new album?
It will be announced when it can be released.

The bandcamp site of Sugar Ken

The Italian director talked supense and horror in this rare 1993 interview. …