17. December 2015, Mario Lasar Everything but the girlRecord of the weekTracey Thorn 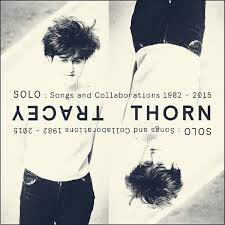 If I was actually allowed to create a world according to my wishes, I would close the door behind me up until around mid January, lie down on my couch and listen to Tracey Thorn’s solo album over and over again, while re-reading her exquisite biography “Bedsit Disco Queen.” That might sound pretty lame and misanthropic, but that is actually not what I am going for at all. I am much rather trying to indulge my urge for contemplation and Tracey Thorn is just right for that. And it would only be until mid January, as I have mentioned before.

Up until then I would listen to all of the thirty-four (!) tracks that can be found on the compilation over again, get up once in a while and put the kettle on – maybe during “Venceremos”, which is a collaborative piece of work done together with Robert Wyatt and Claudia Figueroa, which has ended up a little too world music, a little too coffee-house-style, making me not too eager to listen to it more than is necessary.

I certainly won’t be getting up to get a new cup of tea when “Oh, the divorces“ is on – or “Kentish Town“, “Hands up to the Ceiling“ or “Sister Winter“, which is Tracy Thorn’s version of a song by Sufjan Stevens. Yet another beautiful cover version: “The Book of Love”, originally by Stephen Merritt aka. The Magnetic Fields. I cannot help, but put down the book, when Tracey renders Merritt’s lyrics in her sombre and soft voice: “ The book of love is long and boring / No one can lift the damn thing / It’s full of charts and facts and figures / And instructions for dancing / But I, I love it when you read to me / And you, you can read me anything.”

Thorn could read/sing to me from the phone book and I would still find it very enjoyable – ever since the Marine Girls and later with Everything But the Girl, who were the most melancholic, most tender, brainy, shy and yet underdog variety of the popular brand of barjazz-pop-revivals the mid-Eighties had to offer (just think of early Sade, Working Week, Matt Bianco – and among them the clumsy couple Thorn/Ben Watt). Until their outstanding hit “Missing” happened with their album “Amplified Heart” in the year 1994 which turned EGBT into something like superstars, a role that did not quite suit Thorn and Watt too well, who – which is rather indicative of the kind of people they are – seemed fairly uncomfortable with their newly won fame. Even before “Missing”, Tracey Thorn had already thought and worked outside of the concept of bands, duos or any other musical ties to work on her own or with other people.

Something that she seems to have done a lot, if you just take a look at the extensive double CD: CD number one is a collection of most acoustic versions and her classic solo pieces, while CD 2 is dedicated to Thorn’s tracks which have more of a clubby feel to them. Naturally “Protection”, her collaboration with Massive Attack, can be found on there, but also a lot of remixes of songs like “It’s all true” and “Why Does the Wind?” – and as is fairly common when it comes to remixes, not all of them are great, not all of them are necessary, though I would not want to be the one to criticise the work of the likes of Tiefschwarz, Ada and Hot Chip. However, in a disco dress/intended for the dance floor, Tracey Thorn’s style as vocalist sometimes just seems a bit off. As if she feels a little uncomfortable as soon as there’s too much glitter and glamour surrounding her. She describes this feeling of not fitting in (because of her considerable height alone) simply marvellously in “Bedsit Disco Queen” – and yes, somehow she is both, Bedsit and Disco, minus the stroboscope.
Alright, I’ll see you in four weeks then, right?
Christina Mohr

What might seem fairly surprising upon listening to the record for the first time is that even though you may have thought yourself to be quite knowledgeable when it comes to Tracey Thorn’s work, you might also have to come to realise that you find yourself unfamiliar with a lot of the songs on this compilation – much like I had to. This may be due to the fact that some of the songs chosen for this record are perceived as rather unobtrusive when considered in their original context of each respective album. As it turns out now, to do so was/is rather foolish. It is quite possible that the individual pieces only reach their full potential and a new level of quality, when they are being considered within the context of Tracey Thorn’s musical biography. The individual pieces interact and influence each other so to speak, hence forming a new entity of outstanding brilliance.

The album’s not being structured in a linear or chronological fashion, helps create the impression that Thorn’s work has not yet come to a conclusive end. This compilation underlines the procedural character of her work, which is why the actual term of the “oeuvre” does not seem to make much sense in this particular case as the term seems too much rooted in the sense of completion. Above all Thorn’s collaborations with other artists (Style Council and Working Week on CD 1) respectively the remixes of her songs by other artists (e.g. Ada, Morgan Geist or Hot Chip on CD 2) demonstrate Thorn’s tendency to seek creative interaction and discourse, underlining her being open to the influence of fellow artists when it comes to her own creative process.

The first CD sports rather “classic” song writing in comparison to the second one that comes across fairly “electronic”,. Thorn’s tracks appear very accessible and are sparingly orchestrated. Reminiscences of folk pop are ubiquitous. This sense of musical reduction may well be connected to the fact that the space in which the lyrics are unfolding is supposed to not be dominated too much by music. Thorn’s lyrics have always been of a certain literary quality, which however, to a certain degree has remained intangible. The world Thorn describes in her songs is permeated by bits and pieces of real life, which is achieved and illustrated by her reference to places that have been borrowed from reality (“Kentish Town”, “By Piccadilly Station I Sat Down And Wept”). It is through that that Thorn creates a pleasant sense of familiarity – you can easily lose yourself in the world that she creates and feel at home for a little while, you do however not get the sense that you are now obliged to stay there forever. Another aspect when it comes to her lyrics is the manner in which the potential for transgression and transcendence, for loss of control, is inherent and at times imminent, but then eventually is not implemented (maybe because the protagonists of the songs exercise too much self-control after all).

Tracey Thorn creates music that outlines melodrama without yielding to it fully. It may well be that after all it is a sort of equilibrium that is being aspired to. Somehow there was something distinctly therapeutic about this for me.
Mario Lasar

Various Artists “The Ladies of too Slow to Disco”

DJ Supermarkt has once again unearthed amazing songs, that are perfectly balanced between virtuosity…