Various Artists “The Ladies of too Slow to Disco”

12. April 2016, Mario Lasar “The Ladies of too Slow to Disco”CompilationDJ SupermarktRecord of the week 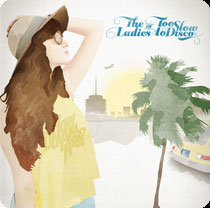 V.A.
“The Ladies of too Slow to Disco”
(CitySlang)

I have to admit, that I had to swallow hard, when the first „Too Slow to Disco“- compilation was released, two years ago: Rupert Holmes, Chicago, Doobie Brothers – Westcoast sound, soft rock, California dreaming, that had been the fabric softener, bearded, satin suit-side of the 70s, the music of my parents…more specifically: not even that of my parents, they preferred the Stones.

On the other side: What did the chill wave-hipsters like Toro Y Moi, Ariel Pink and not least Phoenix refer to? You’re right, the soft gleaming yacht rock of the mid Seventies – Well, better give it a cautious listen? And what shall I say? Compilator Marcus Liesenfeld, aka DJ Supermarkt, and former boss of Bungalow Records, was right of course. “Musical pleasures should always be unabashed“, he did write sagely into the booklet, for the scandalmongers, who were about to haul off with the Eagles (or even the Fleetwood-Mac-) mace, to beat down tender counterarguments with the – infutable – supergroup-megalomania.

The soft rock of the seventies had first and foremost been the heyday of the studio musicians. A lot of unknown, often tragically failed mega talents tinkered behind closed doors, until their beards reached their knees, and until the pop song made of funk-, soul- and jazz-set pieces, which was often times to slow for disco and to soft for rock, was allowed into the light of day resp. the radio. They often became hits: “Do you feel it?“, “Saturday in the Park“… no wonder, that Mr. Wiesenfeld soon was able to release a “Volume 2“, with even neater, more obscure songs of even harder failed existences.

And now even, ta-daaa: „The Ladies of Too Slow to Disco“ – a record, that I was looking forward to very, very, very much, because TSDT 1 & 2 relentlessly revealed, that the mid-seventies had been a men’s world, where women either were allowed to sing in the chorus or to writhe themselves decoratively on the polished hood of a Chevrolet. Okay, I’m exaggerating – but just a little bit. Most of the TSTD-Ladies acted largely unseen, even though their songs were at least as good as those of the male soft poppers, often even better, because of deeper emotionality and greater stylistic audacity. Crate digger Wiesenfeld unearthed nineteen songs to be exemplary for the great era of female songwriters, and at the same time were (resp. are) exceptionally gifted singers and instrumentalists. Next to artists who faded into obscurity, like Laura Allan or Jaye P. Morgen, big names are also being featured: Carly Simon! Rickie Lee Jones! Carole King! The great thing about the TSTD-compilations, apart for the music, are the detailed informations about the artists: The fact, that hits as “Arthur’s Theme“ or “That’s What Friends Are For“ have been written by Carole Bayer Sager, who was married to Burt Bacharach, and who provided Michael Jackson, The Doobie Brothers, Liza Minnelli and Frank Sinatra with compositions, is quite the big story. Lauren Wood (my favorite) is the most freaky one on the compilation: Initially Lauren Wood sang on albums of Frank Zappa, later she had a band with her cousins and recorded – of course – unsuccessful records, until she switched to film music in the 1980s and i.a. had a song on the “Pretty Woman“ soundtrack.

The story of Lyn Christopher is also fantastic, her neighbors Gene Simmons and Paul Stanley (in pre Kiss times) contributed as background singers, and Peter Criss did at least contribute some hand claps to a couple of her songs… just for these stories, I do love these compilations, but even without the booklet you can have a great, shiny, glamorous time with “The Ladies of Too Slow to Disco“: Songs like “Shine Like You Should“ from Melissa Manchester or “Baby I don’t want your Love“ from Teri de Sario are full of feminist power, soul, and oh – just listen yourselves, but be sure to wear your dancing shoes.
Christina Mohr

It might be that Matthias Strzoda and Detlev Diederichsen did invent yacht rock, in the 90s they did initiate the Balladeers & Troubardours-DJ-Team in Hamburg (and subsequently did inspire numerous pub-DJs in Cologne).

Although it has to be conceded, that Diederichsen and Strzoda did practice a more broadly defined idea of yacht rock, compared to the Too-Slow-To-Disco-series, one that can more easily be conciliated with the term west coast. Within the scope of this approach the creaking tropicalism-adaptation of someone like Hirth Martinez plays a major role than the often firmly slick sound we know from the Too-Slow-To-Disco Compilations. In fact these two concepts are not mutually exclusive. An invitingly large leeway originates just because of the musical confines of west coast and yacht rock, in which Grateful Dead and Michael McDonald can come in contact with each other. The third issue of Too Slow To Disco at hand is exclusively concentrating on women. On it the smooth, streamlined variant of the genre is dominating, but with Rickie Lee Jones classic “Chuck E’s in Love“ at least one song with a more rootsy quality is present.

Other than that a subtile tension is at most existing, because rhythm-heavy, funky passages are kept in suspense until they are being resolved in sugary harmonies in the end. The sparkling surface-design of the music provides many of the represented songs an ambient like effect. This consciously veils, that the songs often tend to have an ambiguity, which translates the complexity into levity. The music conveys an appealing decadence by appealing to a ultimate laziness. Yacht rock doesn’t demand anything from you, keeps a distance instead of imposing on you. In this respect yacht rock / west coast is, cornily worded, equivalent to a music made light breeze, which at the end of an overheated summer day provides the eagerly awaited cooling and recovery. The incredibly velvety grooving classic “Midnight at the Oasis“ from Maria Muldaur gets to the heart of this feeling with marvelous elegance.

DJ Supermarkt has once again unearthed amazing songs, that are perfectly balanced between virtuosity and glamour. A strength of the songwriting, that distinguishes many of the songs, is that they manage to be forceful without yielding the smoothness-factor that usually defines yacht rock. A highlight in this regard is Carly Simon’s “Tranquilo“, which seems to enhance itself on and on.

Yacht rock is of course often associated with a high gneedleing factor, no one ever thought about approving of before. The musical skill, that underlies the music sounds like punk never happened. The willingness to like this music now is owed, next to the obvious nostalgia for allegedly more innocent times, to the tendency to wish to reevaluate condemned genres, so they can be appropriated from the current perspective. People who nowadays are looking for west coast- or yacht rock-records on flea markets are charging the music with recoded meaning it didn’t have during it’s own time. Yacht rock is being received improper, which is not to be confused with an ironic wink. It’s rather that inauthenticity is involved with a construed coolness, that was originally refused to yacht rock. And that is completely okay. We are sailing on, ahoy, ahoy!
Mario Lasar

"I cannot help, but touch upon my own personal history in reviewing this." So says our writer Jens F…