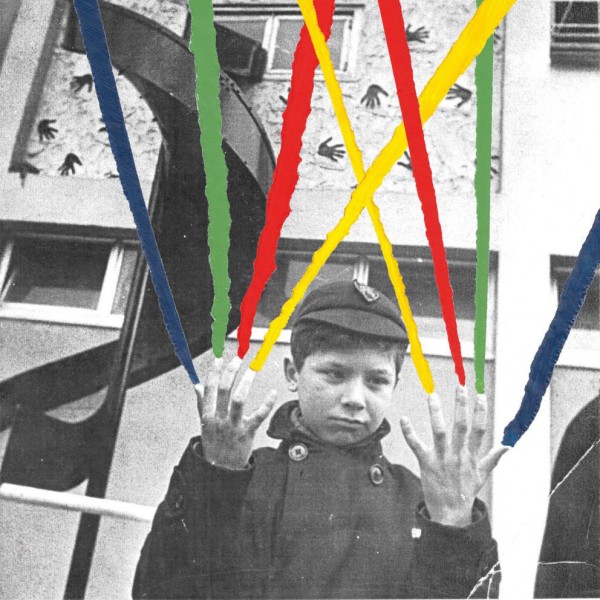 I have been writing music for 23 years, that have passed unbelievably rapid to me, and in all those years I have surely written around 1000 album reviews, but there is one thing I have never done: write a review about a live album. The format concert recording inheres something somehow only peripherally exciting; and even if I as a fan am glad about them, none of them ever appealed to me in an artistic intensity that prompted me to write about them. It might have been different if “Alive!” from Kiss or “The Name of the Band Is Talking Heads” from the Talking Heads would have been released during that 23 years – but they haven’t been: so shut up.

It feels like The Notwist have been accompanying me since the beginning of my time as a writer. To this extent it is a fitting coincidence that they open “Superheroes, Ghostvillains + Stuff” with “They Follow Me”. Micha Acher is singing about hands that touch the protagonists face, hands that mean so much to him that even the always present fear to make mistakes vanishes. He is singing about love. Of course.

Funnily, I was aware that I would write about “Superheroes, Ghostvillains + Stuff” after the first time I listened to it, despite all the mentioned deliberations concerning live albums. It is so much more than a live album with songs from miscellaneous albums from The Notwist. It is an object lesson on the modus operandi of the band, without containing the air of just presenting their achievements. The Notwist are characterized, amongst other things, by the fact that they are able to collage emotionality, and even pathos, with stylistics and finesse, their music is moving and stimulating, draws the abstract naturally, sometimes even simple, and that is beautiful.

The album reveals this with “Close to the Glass”, positioned in second place. Suddenly the just now calmly composed sound opens itself to a cluster of afro beat-, industrial-, tribal- and dance reminiscences, just like we remember it (in part) from the band’s last records and all of their shows.The Notwist as unity jamming with itself: Unrest, curiosity, collective consciousness, exchange, joy, just a few words I come up with – and suddenly the show’s audience cheers, just like they are allowed to in between the songs and thereby have an active part in the beginning and end of the songs. A gesture that by no means seems as cheesy as that may sound now, but that fittingly illustrates the band’s social rootedness in their environment. The Notwist have always been the perfect visualization of a band who never felt the height difference between stage and concert hall, or rather, if it existed spatially, a band who did everything to eliminate it perceivedly.

I could endlessly write a lot about every song of the album. Every single one of them is boldly being faced with itself. And they are by no means just the eternal favorite songs of the author (“Pick   Up the Phone”, “Trashing Days”, “Neon Golden”) that are able to speak especially intensive, but also songs like “Into Another Tune” and “This Room” that manage to surprisingly unfurl in new ways during the show.
Thomas Venker

There probably aren’t too many people who would put The Notwist, the band from Weilheim, in close vicinity to punk – but the recently on Ventil published reader “Damaged Goods” or respectively the author Tina Manske does exactly that: On the basis of the 1992 album “Nook” the punk noise roots of The Notwist are being deduced in retrospect. From 1995 on, with Martin Gretschmann alias Console as a new member, they included more and more computer-generated jazz and electro elements into their sound.  And how awesomely mind-blowing it was back then to listen to “Shrink” or even better “Neon Golden” for the first time. Punk? Or rather kraut ambient? Oh well, it’s just a question of semantics.

Celebrating The Notwist’s roughly 30-year (!) anniversary the band makes themselves and the fans a really amazing, luxurious package: In the middle of December 2015 the Acher brothers plus Andi Haberl, Max Punktezahl, Karl Ivar Refseth and Cico Beck as current Notwist line-up played three shows at UT Connewitz in Leipzig – based on theses shows the double CD/triple vinyl album “Superheroes, Ghostvillains + Stuff” were developed, it might even pass as a best of album (only hits: from “Pick up the Phone” to “Pilot” to Close to the Glass” little is left to be desired). But they wouldn’t be the “tinkerers” from Weilheim if they wouldn’t turn their songs inside out when playing them live. Or downright call them into question – The Notwist are not suited as super group/-heroes, although they are exactly that on closer consideration. They know exactly that they have composed sublime music, but they refuse to staunchly reproduce it. The band afford themselves dashing impro excursions, prog and kraut rock galore. Sometimes you only recognize the song from Markus Acher’s characteristic smoothly soft vocals. This is also inspiring and stirring on the long run, and yes, almost better as the well-known studio albums. With “One Dark Love Poem” at least one reminiscence to The Notwist’s early loud and wild years is included: The deconstructivist and expressionist approach to the own material sure enough drives home why The Notwist nevertheless is a punk band. Somehow.
Christina Mohr