It’s a bit like in horror movies. Nobody knows when “it” arrived, but now it’s everywhere… And just like in John Carpenter’s classic „They Live“, the invasion happened without us realising. Could it be we’ve forgotten how to resist so soon?

I talk of course about the grim commercialisation of the cultural sector. These days no matter how small or simple the project, it seems we get sucked into endless meetings, Skype conference hang-outs, admin feedback trails, 200 messages deep… Also we’ve been ‘liberated’ into a world of increasing hierarchy. Let’s all spend quality time deciding who’s head, lead, chief, senior, sub, junior, whilst finding ever-new euphemisms with which to hide the unpaid (who are in reality probably glueing the whole thing together).

In Dan Gilroy’s excellent 2014 thriller „Nightcrawler“ Jake Gyllenhaal plays a determined pursuer of the American dream, a man committed to getting on, at any price. As a highly motivated ambulance-chasing cameraman he knows the shot and the fee trump moral concerns for the dead and the dying. However, for his accomplice, “Rick”, it soon transpires that the move from intern to assistant producer is going to involve a lot more than cutting some moral corners. It’s the perfect moral fable for our time.

No surprise also, that the film is based in Los Angeles, the city at the end of the American dream, where the Pacific coastline marks the boundary of success and failure, sink or swim. As we’ve known for so long, the key part of ‘the dream’ is the ability to adjust perfectly to the system, you don’t sell-out so much as have to buy-in. Titles become markers of success no matter the grim reality of long hours, shit pay, and a ladder that stretches forever upwards, always out of reach. The American dream isn’t unionised pal, so don’t complain, just keep your head down and get on with it.

The emphasis on ‘titles’ is just one aspect of the commodification of the arts and culture world. The other one is related to that ur-German talent for organisation.

Of course times are tough. It’s been a mainstay for ages that across the culture industries “the numbers are bad, man”, it’s “tough out there” in books, music, films, art… But what’s so interesting is you might expect the removal of money from the sharp end of creativity to free up some genuine new ideas, some brave work, some risk taking, right? But instead the opposite is happening. Culture and sub-culture is getting all salary-man, despite the lack of salary. The slightest little art night, or 7” release is being subjected to the same social media campaigning you’d expect for Die Hard VII or the next Daft Punk long-player.

Okay being organised, we get it, that’s great. But it’s purely magical thinking to imagine the niche economics of some great little art project is going to go through the stratosphere if you wear a tie, and pretend to be General Motors.

It’s pernicious, this activity. It feels like we’re losing the substance of the art, music, movies… as the ad people used to say, over-concentrating on the sizzle rather than the sausage. Sure, there may be no money on the horizon, but there are so many opportunities for creating stimulating new spaces, works, events and thoughts. It feels like we’re in danger of turning all creativity into a class of promotion, missing the actual moment to enjoy our freedom. We should celebrate the work, the exhibitions, publications, music, videos instead of getting stuck on the hamster wheel of promotion, reach, metrics. Let’s think about meaning, not marketing.

Look at the history of the arts, were the overachievers who made great wealth from their art, music, djing usually the ones who produced the stuff we still remember, venerate and love? No, the good ones pursued the work because they had to, and we salute them for that, maybe that should be enough. 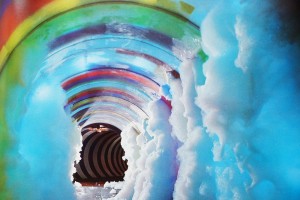 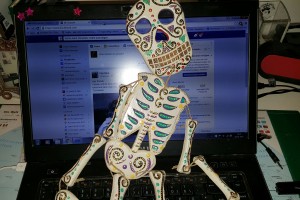 When someone died in the past, ground was poached up and their body got buried in a hole. A rather m…

A few days ago, an author friend of mine – who can’t quite make a living solely from his brillia…