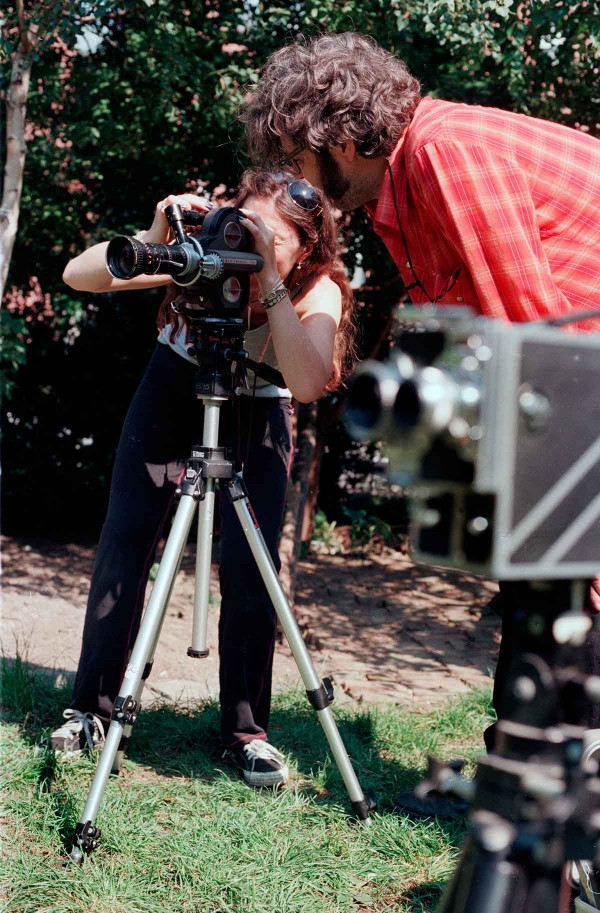 Tessa Hughes Freeland is a british born experimental filmmaker who moved to NYC in the late 70ies. She quickly became part of the legendary “No Wave Cinema”, a guerilla-style filmmaking group consisting of artists like Jim Jarmush, Nick Zedd, Steve Buscemi and Vincent Gallo that emphasized mood and texture and later on generated the “Cinema of Transgression”, an underground film movement that used shock value and humor in their work. Besides Tessa artists like Lydia Lunch, John Waters and Richard Kern amongst others were part of this group.

Tessa Hughes Freeland´s work has always confronted acceptable normality in transgressive and provocative ways as in “Baby Doll”, where she documented the seedy urban demi-monde of strippers, or in “Dirty”, a collaboration with Annabelle Davies, in which they touch upon the controversial topic of incest. Tessa describes her films as poetical provocative.

I only met Tessa in in 2002 although I had heard of her work in the 80ies when I was still living in NYC. Her scene was always the coolest in town and I was incredibly in awe when my husband Alexander Hacke introduced her to me post 9/11 – I had to smile, thinking of how intimidated I would have been years ago. We had dinner with her and her husband, writer Carlo McCormick, and I enjoyed the fascinating stories she told me about her decades of film work and collaborations immensely.

In 2001 Tessa Hughes Freeland was named a fellow of the New York Foundation for the Arts and her films have been shown in museums internationally every since. When Tessa hosted an exhibition at KW Contemporary Art in Berlin in 2012, I invited her to participate in a video/film exhibition I was curating. In 2018 her work was presented at the MOMA in New York.

I always enjoy seeing Tessa, she is a soft spoken, elegant and intelligent woman that has seen it all, broken many barriers in film-making and continues to be a central figure in the NYC art and film scene. She is an inspiration and I am very happy to be able to interview her.

Danielle de Picciotto: Tessa, what is it you want to express in your films? Is it a general theme or always a different one?
Tessa Hughes Freeland: I believe that everybody sees and perceives the world differently, so there are all these different realities existing simultaneously, including those below the level of consciousness or outside of it. People are sensitive to all kinds of sensory information to a greater or lesser degree. There is so much going on simultaneously and it spreads across time, so many people have developed sophisticated emotional filters to deal with any sentiments that may be uncomfortable. I’m interested in penetrating those filters and getting beyond them and exploring areas of discomfort. I an also interested in channeling a stream of lateral unconscious thought. I sometimes plan and sometimes I work spontaneously. Even the plans give way to spontaneity and that’s usually the best because it acquires a magical life of it’s own and then it’s the most exciting and inspiring to work with.
In terms of themes I like to explore emotional states such as Hell-bent self destruction, frenzied disorientation, crushing beauty, gentle contemplation, scorching desire, explosive joy, lighthearted fancy, deep sorrow, transporting or uncontrollable love and intense passion. Otherwise they are mysterious dreamlike adventures. My films are really personal rituals. 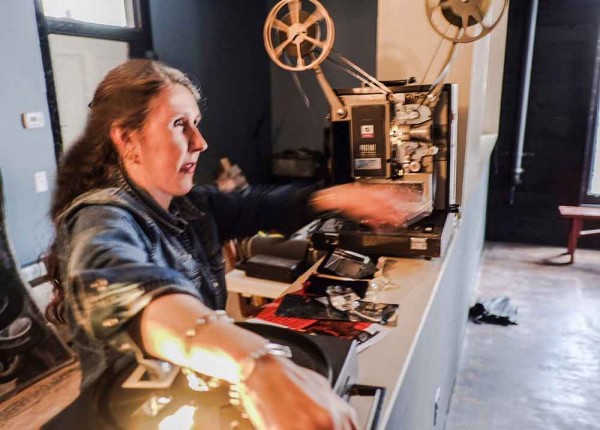 What do you look for in films in general? What are your favorite ones?
I like films that are a little peculiar, to make me think, as well as films that are beautiful to look at or give me space to get lost in, or a mood to envelop me. I’m looking for a place to escape to. I’m looking for beauty and depth. I do like them to be slightly eerie or involve a mystical element. For that reason I love Andrei Tarkovsky, particularly “The Stalker”. I like fantasy action films, for instance the Hong Kong film “Green Snake”, I really appreciate the way that sound can be sculpted in the way that Michelangelo Antonioni does. He allows it to totally dominate or just disappear. Other than “Zabriskie Point”, “The Oberwald Mystery” is one of my favorites. I’m always delighted when I come across a film I know dubbed in a foreign language with subtitles in different one. The overload creates a confusion of meaning and I love that. It’s subtle psychedelic. I love the bleakness of humanity in Lars Von Trier films and that it is matched with emotional pathos, or the mysterious psychopathology of Dario Argento, which is so intense. Of course I love experimental and underground films, especially Harry Smith, Kenneth Anger and Storm de Hirsch. I also have an affection for old Hammer Horror films, which I grew up on. In general, I like black and white films, especially those by Jean Cocteau. This is a really hard question to answer because I like so many films. 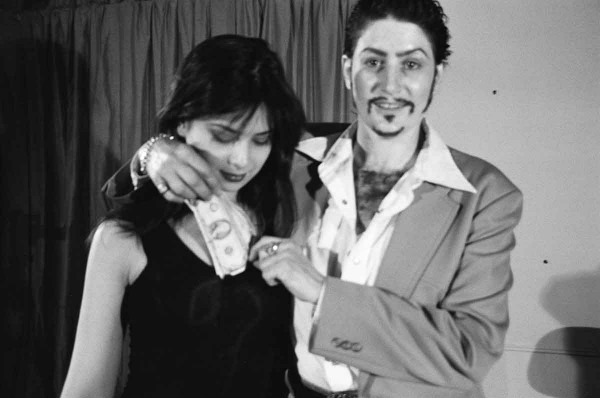 You have been directing and producing films for over 30 years . Has anything changed for you over the time in what you are trying to convey?
Yes, definitely, many things have definitely changed. I have always made live action films as well as collage films, which include found footag as I used to think that I could find most of the images I needed. That the images existed already as signifiers and emotional triggers, which I could assemble to create combinations that would work for me as a symbolic language. With respect to the collage films, I wasn’t so attached to creating my own images. I like it when images can crash into one and other in an incomprehensible way yet are recognizable. To me spontaneous transformation is essentially psychedelic. Of course, where the live action films are concerned the imagery was a product of my imagination combined with the dictates of the immediate environment and circumstance during the shoot. There is only so much one can control and less that I actually wanted to. As time has progressed, I have gravitated towards shooting outside more and adhere to the dictates of nature. One cannot argue with that. I have found myself becoming more interested in landscape and along with that, I have become more attached to creating my own visual language. It’s mostly informed by ancient mythology and mystical occurrences, yet incorporates more elements of the intellect. Even though my films are figurative, I’m usually thinking about abstract concepts within a romantic framework. I really see them as visual poems. 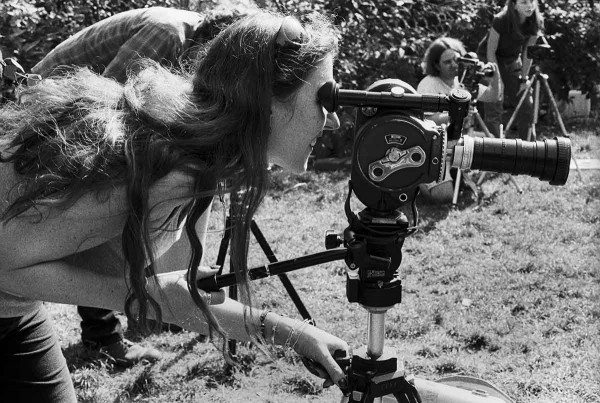 Tessa, what are you working on at the moment?
I’m working on a new film about memory and loss. It focuses on varying stages of femininity, our collective unconscious and the mythology of female archetypes as seers. It also draws on pagan roots. Marrying ancient mythology with the irony of nostalgia. I am also working with film material directly. Making hand made slides from plants and animals and hand made film, which I may possibly integrate into the film one way or another. If not then they may end up as different film, which will be more abstract.

What are your plans for the future?
I‘ll just keep working and see where that takes me. I’ll follow the ideas that come to me, some turn into something and others don’t. I’m going to have a show in an art space called Howl! in New York next year, which will be an installation implementing a variety of cinematic elements. I have also been invited to be in a museum show in Seoul, Korea this winter. So I will start thinking about that. I have more respect for the unplanned than the planned. I think that actually is the plan. Otherwise, I‘ll just keep flowing down the river to the sea. 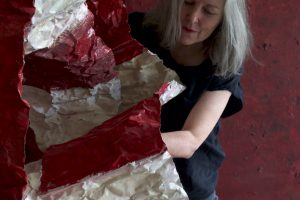