LIVE (AND DEATH) AFTER THE MUSIC INDUSTRY: ERIC WREDE

“YOU CAN NOT REALLY BECOME AN UNDERTAKER…THAT IS RIDICULOUS!” 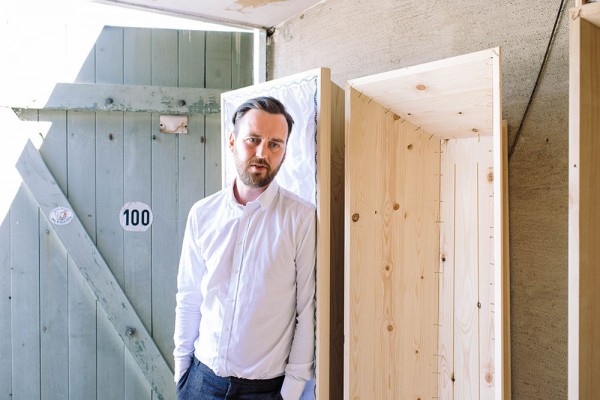 Shoulder to shoulder with Tim Renner at Motor Music he did experience the more intimate version of the music industry. And yet did Eric Wrede realize how his music listening behavior change, and how suddenly a category like “saleability”, that was unknown up until then, became so important. This was one of the reasons why he did not feel fulfilled anymore, and why he felt the urge to start a new phase in his life — as an alternative undertaker with his company “Lebensnah Bestattungen” (true-to-life funerals). Even if this was and still is not always an easy way, he is still feeling a lot more relaxed to not have to be part of the rushed race that is the music industry.

Eric, how did you get into the music industry?
Eric Wrede: The story is very beautiful. While I was studying German language and literature I was working at a record store in Berlin — which meant that all the money was immediately reinvested in new vinyl records. One Evening, while I was playing records a likable, older man sang along to The Killers, who were still unknown. After a short, drunk conversation about the music industry, Botsch (Matthias Böttcher, formerly Universal, now Rough Trade) told me to get a look behind the scenes and stop being such a loud mouth. His friend Tim Renner (I had no clue who he was) was about to start a new company called Motor, and that I should contact them. No sooner said than done. I started out as an intern. At first I did not get paid, but soon the first successes were achieved with Polarkreis 18, Selig and Bodi Bill. I did enjoy the years with Motor a lot. We have never really been music industry, it was rather a small family business. Almost like a habitat. 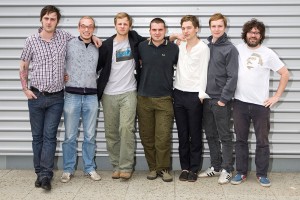 Do you remember the first time you considered that this might not be the direction for the rest of your working days?
Every time I saw someone over 40, whom the cynicism just leaked out of the eyes. The music industry is a bit like studying German literature: You unlearn how to listen to music. That’s at least how it was for me. It took me ages until I stopped listening for “saleability”. Only after one or two years I was able again to just feel if a song moves me. But in the end I didn’t decide against the entertainment industry, but for something new, well-thought-out.

What tipped the scale to make you reorientate?
I mean, it is always a combination of different things. First and foremost it did have less to do with the “industry” and more with myself. I wasn’t fulfilled with what I was doing anymore.In the back of my head I had been looking for quite some time, and there was a list with what I wanted and what I don’t like doing. But I couldn’t find anything. Until I listened to an interview with an alternative undertaker one night. Suddenly everything fell into place: Precise work, helping people, and an area, where you still are able to do things newly and differently…
I certainly carried the idea around with me for at least half a year, and initially thought: “Dude, you can not really become an undertaker…that is ridiculous!”The final straw sadly was that one of my best friends got seriously ill. That showed me in a really grim way: Don’t waste your time with something you do not love. Two days after I learned about his illness, I got out of everything and went looking for a way to become an undertaker. 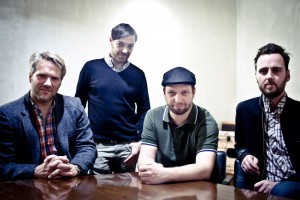 How easy was it for you to let go?Relatively easy, up until now. The process in itself was of course exhausting and hard. Even if it might sound esoteric, but if you know that you are doing the right thing, you can endure quite a lot without complaining. And that is exactly the feeling I had at that point of the journey. What I mean to say is, that letting go was easy but beginning something new was extremely exhausting.

How did you approach the new activity?
First I wanted to find out and learn for myself, if I am able to handle this work. Therefore I went to a funeral home that was conventional and in the best sense conservative. There I worked — kind of like an investigative journalist — at the lowest position, I did every work you can imagine, I even cleaned up the basement. But that experience was incredibly important to learn, to understand, and to check if I can cope with this job. Even if they worked completely different than we do now.
Concerning the contact with the departed, to this day it is every time something very special to see a deceased person. I have never been religious, but seeing something that has been left by life, it does something to me, and to others as well. The whole history, all of the feelings, everything is lying in front of you in a body that is not alive anymore, just carried by friends and family.
The part that is still incredibly hard for me, is the contact with uninterested or hateful surviving family. Unfortunately you will get that  time and again. I haven’t found a formula for that yet, not for them and sadly also not for myself. In the most cases I do ask the bereaved to rather go to a different funeral home.

So, you are not a conventional undertaker, but you are pursuing a — as your company’s name, Der Lebensnahe Bestatter (the true-to-life undertaker), expresses — special, personal approach. The bereaved are building the coffin themselves, under your instruction…Did I get that right?
Haha, I didn’t come up with that pun yet. It’s exactly about that approach, grief unfolds through closeness and playing a part, not through waiting passively. And grief has to unfold, otherwise the bereaved will get sick.
The manual approach is especially for friends of deceased people fantastic. The survivors of the second row (those who aren’t immediate family) often have a hard time during the mourning process. The family might want to keep to themselves, but everyone else is also feeling the need to contribute and wanting to say good-bye. Therefore we came up with an idea to create a possibility for everyone to play a part, without having extra costs. The coffin has to be bought by the family anyways. But that is just one example for how you can involve the individual groups of bereaved. It often has to happen quickly. Especially with you deceased people it is very important for the bereaved, who organize the funeral, to include a close friend. Parents and siblings often do not know anymore what their day-to-day life looked like, and, more important, who might want to come to say good-bye. That’s what my whole work is about, facilitating a personal good-bye for everyone. 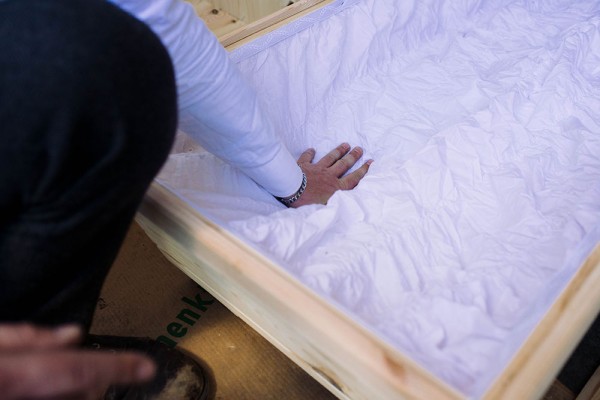 Are the relatives also involved onwards in the funeral? Digging the grave comes to my mind…?
The funeral industry saw over the years to it, that everything concerning the death and funeral of a human being feels like a black hole. No one really knows what they want, what they can do, and what is right for the survivors. This results in a lot of decisions made while being overtaxed by acute grief, that will be regretted afterwards. The list is incredibly long. Be it that you decide, under pressure from a third party, that the deceased gets picked up quickly, and therefore a lot of people are being denied the chance to say good-bye directly and personally at home. Or simple things, like wanting to lower the urn of your grandma yourself instead of some dude from the cemetery.
That is always a small struggle against the institutions. But you can achieve a lot, that other undertakers would decline immediately, because it would mean a lot of work for them.
We would never explain someone what a funeral has to look like. We shape the way anew almost every time,
Usually, when you are meeting the undertaker the last time you saw the deceased he was still alive, and then you are at the funeral standing in front of an abstract urn that is being lowered into the ground. During that a speaker you do not know is talking. As a bereaved person you are very far away with your own grief from what is happening in front of you. That will not happen at our funeral home. If possible we will always integrate the bereaves as much as they are able to and want to be involved.

Where did you get these ideas?
None of this was really my idea. There are several people who have been fighting against the fossilized structures of the funeral industry for years. It first started with the hospice- and also the gay-rights-movement. They wanted to give a more open and different shape to death. Death is a natural part of life, even if it’s an ugly one, that no one likes to see.
But at its best death is a force you cannot prevent, but it is one that can have an enormous and positive influence on life. Really understanding, that you won’t be here forever can give an incredible force to your life.

I can only imagine, that in this personal process of preparation for the funeral a lot can surface for the relatives. Doesn’t that mean that you almost have to fulfill the role of a psychologist?
Lately several undertakers, including me, had a discussion about what the profession should be based on. Instead of the mostly offered vocational training in commerce and craft we think a degree in psychology should be a prerequisite. The harm that can be caused by an unsuccessful mourning-process is substantial. But luckily the opposite is often the case as well. We are working very hard on that. When the bereaved consider involving children and adolescents our child psychologist always tells them the same thing: You cannot protect anyone from the fact that death and loss do exist, but you can shape how we deal with it in for the benefit of all.

How do you feel, when you look back on your years in the music industry?I’m always happy when I meet old and cherished acquaintances and friends. A huge part of my circle of friends is still working in the music and media field, but feel very relaxed that I’m not part of this rushed rat race anymore. Someday I would have drowned in it. But, hey, I just played records with Tim Renner as “the secretary and the undertaker…it seems as if I’m still not completely out of it all.

Follow-up and stereotypical question: Did “Six Feet Under” play any role for the choice of your career?
To be honest, I didn’t see the show until later. Friends gave the DVD-box to me, after they learned about my wish. Luckily the show isn’t that unrealistic in large parts. An example would be the wish to say good-bye to the deceased. It certainly doesn’t happen as a tea party as in “Six Feet Under”, but wanting to do it intimate and personal surely increased thanks to the show. And that fits perfectly to our work. 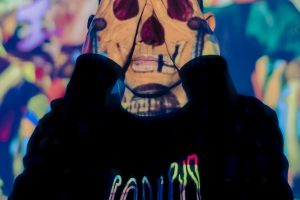 Cristian Vogel: “I can’t see the future, I can’t tell you how it´s going to change – but it must change.”

"The global music community *is* a working community, not an industry – and it is a sector that su…