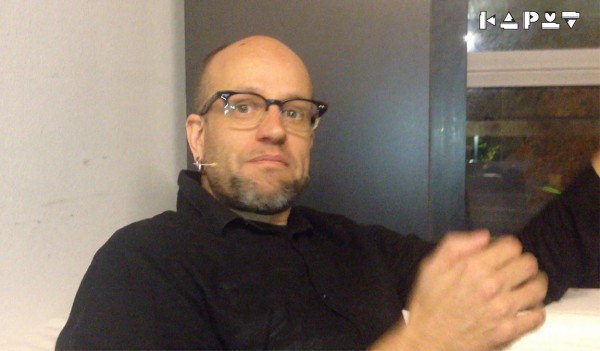 Without Robert Henke the history of electronic music would have to be rewritten. Together with Gerhard Behles he fumbled his way through the techno-catacombs of Berlin in the 90ies, as Monolake. Back then he was equally interested in the classical functionality of the club, as in room-accoustic experiments, Ambient and Noise. Tracks like „Cyan“ or „Magenta“, both released on the Hardwax-imprint Chain Reaction, are nowadays considered as classics of electronic music.

Inspired by working together at the studio, Behles and Henke founded the software company Ableton in 1999, and with it they made an important contribution for the democratization of the production conditions of electronic music. While Behles by now only devotes himself to Ableton, Henke is still producing and performing solo as Monolake, and teaches at the Berlin University of the Arts as a professor of sound design.

At CTM festival Henke will show his audiovisual installation Deep Web at Berliner Kraftwerk, developed together with the light artist Christopher Bauder. Furthermore he will play his project Lumière, an audiovisual composition for laser and sound, as the official „closing concert“ of this years festival.

Robert, you just returned from Mexico, where you performed at the Mutek Festival with your Lumière 2 project. How was the festival?
It was nice. I performed at a beautiful theatre. I did like the performances, that I have seen from others, as well. The only problem in Mexico is, to get the technology up and running. But I did know about that beforehand, that’s why I arrived one and a half day earlier and had a whole day to set up.

What’s the difference between Lumière 2 and the previous album?
1 originated from the idea, that everything is improvised, and was structurally arranged in the way how I would play a Monolake live set. It became apparent that I couldn’t reach the necessary complexity and precision, that I want to reach. In the beginning I thought it was a matter of rehearsing and mastering the instruments, but after around ten shows I came to the conclusion, that it is a much more fundamental problem. The basic principle just doesn’t work. The software, that I developed for the control of the lasers, isn’t complex enough. The concept of firing off clips doesn’t work in such a situation, with an audiovisuell project, like I wanted it to. That’s why I decided to radically start over from scratch. Out of necessity I went ahead with five, six shows for the first version because they had been booked already, funnily, they were better, because the pressure was gone. The new version is based on a completely new software that allows much more complex figures and has an entirely different technical structure. The main difference: It is a composed thing, suspended from a timeline with a lot of automation dates – every millisecond is fully defined. This makes it possible to work in a completely different manner. Now I can make notes after every performance: Fourth song, third change ten seconds shorter. Fifth song, the big circle bigger. Then I will do this, play it again, and notice that, if the big circle is bigger, the bass note after that has to start a bit earlier, and that the other thing, I did before, isn’t needed anymore.

Improvisation doesn’t play a role anymore?
Now it’s a composition. Admittedly it is one that is a work-in-progress. The only situation in which I can test the composition, is to perform it. I can’t simulate it. I can simulate video at home, but not the work with lasers. I have to perform it myself, to get a feeling for how it needs to be. 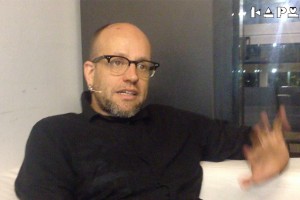 Robert, how long does it take to write such a software?
That’s hard to say, because it contains so much experience from all of the years before. Half a year, three-fourths of a year?

Do you experience writing the software as creative as producing music?
I need to be extremely alert and clear to program, because I have to solve many very logical puzzles. But I don’t have to be creatively inspired. I can easily get up in the morning, make some coffee, and program until nighttime. Maybe I will have a solution by the evening, if not, I will have it the next evening. Making music is much more dependent from moods: I might find a great solution within ten minutes – I might not manage something for two days. That are two completely different things, and I try to separate them precisely.

Does that mean: One day this, the other that?
Maybe not daily. I could once again improve so many things with the Lumière 2 software. But I don’t do that, because I just want to do things that I can do with the current software. At the moment I just want to work on the creative content, not on the tool. At one point I will take two months time to include all the ideas that I have for the software. That all just works gradually. It´s really important, that I’m not working on the software at the moment, but rather perform with it as if it were a gift of god.

Today, at the Loop Event, here in Berlin, Ableton will present their new software Link, which is said to make it easier to make music together. In 2003 I saw you in Montreal as part of the Mutek Festival, as Narod Niki – your project with Ricardo Villalobos, Richie Hawtin, Akufen, Dimbiman, Dandy JAck, Cabanne, Luciano and Dan Bell. I remember well how chaotic the soundcheck and the performance were. It anyhow worked. Does the idea for Link stem back to those days?
I think it would be exactly right for a performance like this if it is that chaotic. That is where the energy comes from to make something like that possible. If you try to load it too intellectual, or design it technically too complicated, it will not work at all. The mistake back then was, that at first we tried to synchronize everything by Midi Clock. But this way didn’t work. I remember that back then I just said: „Just don’t do it like that!“ The computers were already good enough back then, and all the DJs involved as well, everyone was able to synchronize records, but why not the live set? You just push play until it is right, or adapt the speed – tha way you will get a completely individual groove.
The example is the wrong one. But the demand is there.

What was the initial spark for the development of Link?
The general wish for perfect synchronization. Nowadays you can assume that you can manage this – up until then that wasn’t the case. It’s not even that much of a problem when performing live, but if you are working together in the studio, by now everything is sample-precise. The sounds that you use are cut so precisely, that you realize if something starts too early or too late. The aim was to find an option to get even more precise than with the previous methods. That’s why I see its use mostly in the studio, where you now are able to synchronize several computers. Later on you will see how much of it is applicable on stage.

How involved are you in the development at Ableton?
Not at all. At least officially, unofficially I still like to exchange ideas about developmental statuses with Gerhard and other people. I got opinions on everything – it remains to be seen if they are correct or not – you can chafe on them and argue about them. 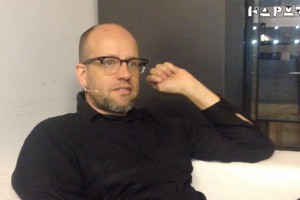 So, you are some kind of joker, who every now and then hands in a very long piece of paper.
By god no, that’s not how it works. It rather is, that I’m meeting Gerhard for dinner and then whatever interests us just comes up. Then balls get passed back and forth. What’s happening with this project? How did that project turn out? What is the future of…?

(Communication manager Olaf Bohn offstage: “And if we, at Ableton, are getting positive feedback from Robert, that makes us very proud.“)

I’m quite the complainer. But in the meantime even I have learned that there is a point, where that doesn’t work anymore. It is extremely important to see the positive things as well, both for myself, so I stop picking on myself, and also for things I have done, that have good parts, and the same also applies to feedback outward. It took me a long time to learn this.

Is that also a reason, why you are no longer involved in the everyday business of Ableton? Because the extent of sociality is to much?
No, the problem was rather that I always saw myself in this dichotomy between artist and software developer. A full time job at Ableton wasn’t possible, and in retrospect this decision as the right one, because it put me in a position to observe the things from the outside, which helps everyone. As exhausting as it was for me and Ableton, to have these endless discussions on certain things, it is really important to have them from a position like this.

On your travels you are meeting a lot of other musicians. Are you sometimes able to gain insights from these field analyses, that some ideas were good, but not suitable for daily life?
No, ideas are never bad. But something that has happened: You may learn, in which different ways artists use the stuff that you have developed. When I’m playing somewhere, I really do look over people´s shoulders, and they have three laptops with Live on them, and they do completely different things with them. Sometimes I wonder, why is he doing it that way? Interesting. Sometimes you are talking to someone, and you learn, that for them a feature, that you considered self-explanatory, is a closed book. You can learn incredibly much about usability if you watch others, that is so much more efficient than everything else. Just watching how other people work.
That’s what Ableton has been doing consistently for quite some time, by visiting producers in their studios. Instead of asking them 20 questions, you just let them get cracking and watch them – that’s how you can learn the most.

Earlier you talked about your rhythm, that consists on phases of playing live, and development. Ableton, as a company, is acting very similar: Where others are constantly releasing new products, they give their product line some time to breathe.
There isn’t anything worse than half-baked new features. It’s better to release less, but rather well thought through things. Namely: Everyone has features, there isn’t a lack in function anymore – but there rather is a lack in well thought through functions. Ableton are doing well with this, thinking first, and programming then.

„Feel welcomed in the disco of inner feeling", thats how the label is advertising the new album b…