Sander, how did it come to the collaboration?
Kiani del Valle and I have worked together on several productions in the more traditionally defined roles of choreographer/movement coach and director. For this project Kiani and I took a more collaborative approach.
Sam (Floating Points) and Kiani were already working together trying out dance ideas for the video before I joined them. She developed several choreographies for different characters, and at some point she thought it would be a good idea to get me involved. Together we picked out two characters and then I developed the video structure around the characters, extending upon the classic form of a psychological internal battle to that of a dance battle with the self.

Tell us something to the idea for the clip?
I wouldn’t like to explain it in too much detail as the video speaks pretty much for itself. But as I mentioned before the choreography was the starting point. The idea is a rather classic theme in cinema or literature, were a protagonist and antagonist are intertwined, becoming inseparable. The tension between the two characters, where they are simultaneously drawn to one another and battling each other is key.

Where was the video shot?
It was shot at the gymnastics hall of the Olympic village in Elstal. We choose this location not because of its history but because we wanted to do a 360 rotation in the first shot and use available light only. After visiting several locations this seemed to be the most suitable.

Do you mind me asking you about the budget?
It was low-budget.

Sander, has there been a special happening at the set you wanna share with us?
Nothing really crazy happened. Our personal assistant Emilia had to do a lot of mopping cause the floor was very dusty, so after every take you could see the dust traces from the wheels of the dolly. Thanks again Emilia.

Please name your favorite five clips by other directors.
Kinda impossible question, that is a never ending and always changing list, but here are a few: 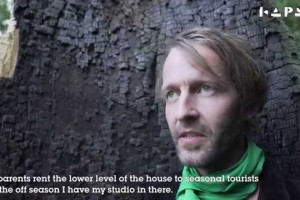