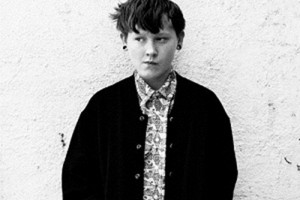 Soak
“Before We Forget How to Dream”
(Rough Trade Records)

Not one single article on Irish singer/songwriter Bridie Monds-Watson aka. SOAK can do without mentioning her age (as this one demonstrates as well) – it is with awe that the piece of information that she is only just 18 years old is placed before any other. And that she was just 13 years old when she started making music!

The type “musical prodigy” obviously has a mystical touch to it – Michael Jackson, Lorde, George Ezra. There are countless examples. The public amazement about the extraordinary upbringing of said artists always evokes similar reactions: one the one hand jealousy concerning their talent compared to yourself at the age of 15 who wrote down cheesy doggerels in purple ink and on the other hand also a little bit of pity, as everybody should probably be busy with pointless shenanigans at that age, instead of building a cathedral all by yourself locked up in your room.

The peers who SOAK (her name being a symbiosis of Soul and Folk) first formed a band with at the age of 13, did not take music as seriously as she did and went to play football instead. Bridie/SOAK on the other hand claims that to her writing songs is essential, emphasizing that she had a very happy childhood and is not depressed or prone to a death wish at all.

Her debut “Before We Forget How to Dream” (following her 2013 EP “Sea Creatures”) is simple, yet passionately charged at the same time, introspective and profound, but also funny. Romantic, accusatory, confessing, changing the world for the better, contemplative … so all in all extremely juvenile – which is great. Above all “B a Nobody”, as an excerpt taken from the lyrics shows: “Weekends and cheap thrills / Risk it all for an inch of fun / We’ll never amount to anything / Come on, come on / Be just like me / B a Nobody.” It’s all in there and keeping your distance all grown-up and that does not lead anywhere anyways. SOAK’s voice is rough and fragile, it sports a heavy Derry-accent, like “come oin” and “you’re in my bloid” and so on and so forth. On a musical level she manages to refute the assumption that singer-/songwriter-folk has to always sound exactly the same: SOAK actually manages to combine Soul and Folk and quite clearly signals to the listener that she is a child of the Noughties, having grown up around bands like The 1975 and Arctic Monkeys.
Christina Mohr

It’s been a while since the last time that I heard a song intro that was as beautiful as the one to “Before We Forget How to Dream”, which is the debut album of Irish Bridie Monds-Watson: “My Brain” flutters delicately through space, a tender swoosh, vague uncertainty, not really frightening, rather in the manner of a slight change in weather cast into sound.

And extremely apt for an album that contains a couple of moments of disorientation. The most obvious of which are immediately connected to Monds-Watson’s origins, as the subsequent track “B a Nobody”, which had been released as a single quite a while go, shows.

It is a state well known from travelling to foreign far-away places. Places where languages are spoken that are unknown to you and whose phonetic characteristics instantly prompt you to be curious and at ease at the same time. Curiosity, since there is so much to discover there and relaxation because for someone with an average interest in and aptitude for foreign languages your knowledge is most likely going to be limited to very basic standards like ordering coffee, getting the check or looking for a hotel, the train station or a certain museum.

I am of course referring to languages like Japanese, Chinese or Russian. And oddly enough, I somehow feel the same way when the pronunciation of the English language strays too far from standard RP, for instance when it comes to strong Scottish accents or Welsh. Or when it comes to the brand of Irish English that is so characteristic of Bridie Monds-Watson, who, supported by the BBC, is most probably on her way to becoming the coming-of-age-artist of this festival season – and her album expressly underlines this speculation – but we’ll come to that in a minute.

Of course Irish English is not as elusive as Japanese, but the narrative does escape the listener’s attention and the rhythm of orientation has to be looked for again and again, which is not exactly easy to do since Monds-Watson’s self-conception as an artist – much like Kate Tempest – is very much tied to her intimate lyrics, which show her cast a loving glance at her own home with the well known confusions of the teenage years. The fragmented version of the world that she conceives of, however, is not detrimental, but supports the balancing act between proximity and transfiguration.

Despite her young age, Bridie Monds-Watson is also very clear when it comes to stating her opinion outside of the world of her lyrics, as her article for last week’s NME demonstrated.

Her article discusses the up-coming referendum on implementing gay marriage in Ireland (the first referendum of that kind worldwide) and clearly displays that she is able to assess the situation smartly.

A positive side-effect of at times only partially understanding the lyrics is that you keep on calibrating the music over and over again. Since even when you are prone to thinking at first that “Before We Forget How to Dream” mainly feeds off the subtly fragile voice and you think that you know what the rest of the record will hold, you will be surprised and convinced of the contrary. The ability of the album to fascinate stems from a multitude of tiny ideas, the way the songs are arranged in different manners and how they only gradually unfurl themselves properly bit by bit. Some of them scarce and austere, as if the protagonist was kneeling in a corner and others opulent, taking up the whole room, with a singer who directly appeals to every single listener and looks them into their eyes and then for instance confesses to them that she is scared of the “Reaper”.

SOAK demonstrates a way of using the power of self-esteem in a charming and positive way: laying bare your own doubts and fears instead of imposing imperatives and being manipulative. Songs like “Blud”, “Wait” and the current single “Sea Creatures” or “Garden” belong to … oh well, why emphasise particular songs when the whole album is a sensation in itself. Even though I was convinced that the second half of the album was not as strong as the first half in the rough draft of this text, “Before We Forget How to Dream” is a remarkable, exciting debut album after all.
Thomas Venker

Last night I dreamt, that I was lying in a hotel room with James Blake. Not, as one might expect, in…