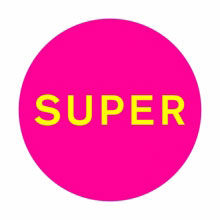 It would probably be exaggerated to label “Super” as the Eurodance record of the Pet Shop Boys. Nonetheless ist this the genre, that Neil Tennant and Chris Lowe tend to reference here again and again. It is indicated in colorful keyboard accords, a blown up night club-sound as well as modulations that raise to head-spinning heights and dissonant, siren like intensities. The most representative songs in this regard are “Happiness“ and „Pazzo!“, which at the same time can be named as the most failed songs. Musically, this Eurodance-adaptations with no lyrical value do convey a static dynamic, that is circling itself. On a meta level the Pet Shop Boys are closing in on a contra-substantial emptiness, that perfectly matches their anti-rockist fundamental ethos. In more pragmatic terms, this approach is just boring, something they never wanted to be, as we all know.

Those songs that counter the Eurodance-bluntness with the classic Pet Shop Boys-cleverness on a lyrical level turn out more successful. The highlight in this context is the single “The Pop Kids“. The song is at the same time organized euphoric and melancholic, because the pop-moment is being projected into the past (“the early 90s“). Therefore, it can be concluded, that even the Pet Shop Boys in their function as advocates of presentness are going through a regressive phase. This way the early 90s are becoming indicators of a time connoted by yearning (but why? Hasn’t pop been already half dead in the early 90s?).

Or is it more than that after all?

“The Pop Kids“ could actually be conceived as an apodeictic statement on the state of pop music in 2016. In the sense of: pop is dead, killed by capitalism, which destroys the places where pop can materialize (London, clubs, vinyl, magazines). In the lyrics of “The Pop Kids“ the protagonists are studying in London, where they go out five nights per week. Today, as is sad, you can either live in London or go out five nights each per week. Everything else is reserved for stockbrokers, bankers and other misanthropes, thus the adversaries of pop music in general. All of this isn’t explicitly addressed in the lyrics of “The Pop Kids“, it’s put in as subtext.

The Pet Shop Boys pick up this thread again in “Twenty-Something“, the song that comes directly after “Pop Kids“. In the present of a loony-prissy melody, that seems almost classical, Neil Tennant sings – now explicitly! – of a “decadent city at a time of greed.“ Here the anti-thesis that’s referencing the negativity of the present time into the time of possibilities and chances that has been celebrated / historized in “Pop Kids“ (capitalism was of course one of the reasons why this possibilities once were generated. And the Pet Shop Boys did play along, because it did establish a pop-parallel-universe, in which esthetically filtered truths could be said, that were effective on a symbolic level). The loss of the faith in pop music („I don’t know what pop music is anymore“ – Chris Lowe in an interview) is linked to an aloof observation of youth, of which they might not know anymore who they are. In this Tennant / Low are not making the mistake of aging intellectuals, to just accept as youth, what they as not affected person think it to be.

But this is maybe a too essentialistic reasoning, if you concern that the prevalent impulse on this record is to step out from oneself, and therefor to continue the pop-idea of anti-substance and changeable identity („I sometimes think I’m too many people“, Mr. Tennant once sung). This is especially recognizable in the record’s best song “The Dictator Decides“ – in it several bounds are being overstepped, for one, by the music withdrawing itself, on the other hand by passing on a chorus. This means that there is a formal break, both with the euro dance-conventions of the record and with the pop song format as such. In this way, the idea, that some form of essence were inherent to the music of the Pet Shop Boys, is being negated. This approach is being reproduced textually in the lyrics, which are being told from the perspective of a dictator, who has become weary of life and his office – he doesn’t want to represent anymore: „If you get rid of me / we can all be free.“ The narrator is constituting himself with a broken identity, which dismisses the notion of an essential quality, that would be inherent to a dictator. As a consequence he can observe himself from the outside, and therefore implement exactly what Robert Wyatt deemed impossible in his amazing “Free Will & Testament“: “What kind of spider understands arachnophobia?“

The idea of the elimination of the self-identity climaxes in the record’s last song, “Into Thin Air“, which varies the idea of disappearing, which has already been canonized sufficiently in pop-history (compare to vergleiche „Eine Art von Verschwinden“ on „Ich – wie es wirklich war“, Blumfeld; „This Is How You Disappear“, on „Rawhide“, Scott Walker; or the whole third album of Phantom Ghost), even if the Pet Shop Boys are orchestrating the dematerialization under more positive signs, namely as an option to start over. At it, all the schemes have in common, that they build on the principle to not yet have found a definite shape. In this the sound of circling around oneself, which i described above, is becoming a preliminary identity, which is always being characterized by the discrepancy between presence and dissolution, actuality and retrogressivity. Sometimes this sounds like musical disorientation, which absolutely does yield its appealing moments, but hardly exhibits any identity-establishing potential. Maybe pop music can’t and shouldn’t accomplish this task in it’s current state of irritation. This might explain, that the last consistently beautiful, conclusive album of the Pet Shop Boys had been “Release“, and that has been released fourteen years ago.
Mario Lasar

Last night I dreamt, that I was lying in a hotel room with James Blake. Not, as one might expect, in…