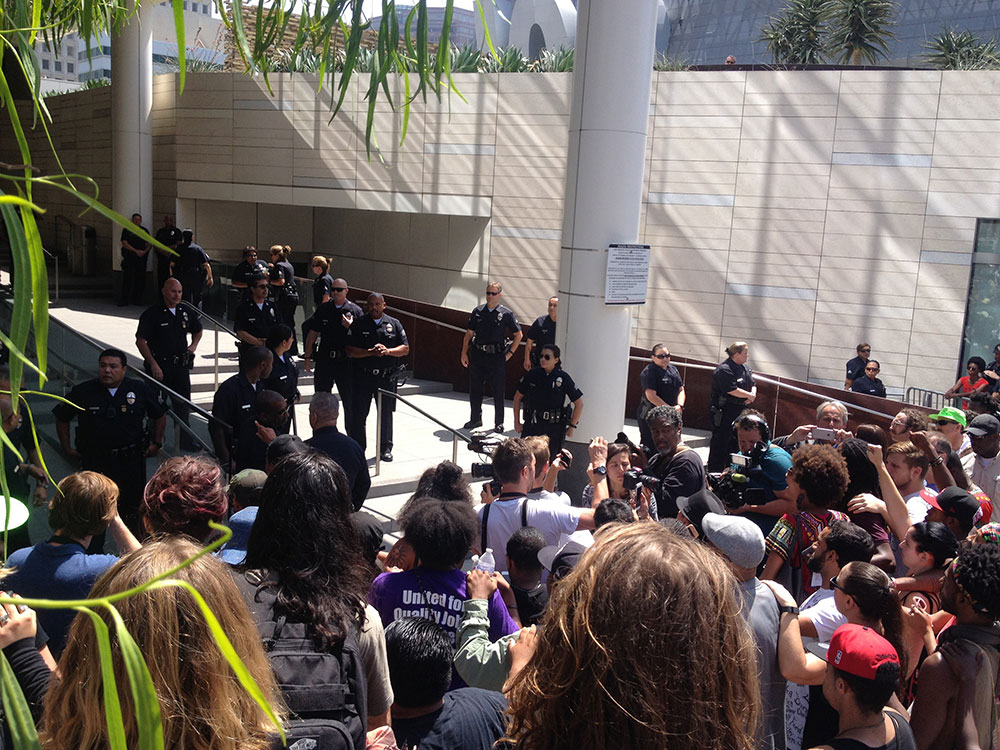 Rally in front of the LAPD Headquarters in Downtown Los Angeles.

Back in the days summer meant that the newspapers blew up the most boring stories to make them their cover stories, and that those newspapers were used to cover yourself up at the outdoor swimming pool because it was way to hot. Today, however, you’re sitting shivering in front of your computer, incredulously tracking the newest end of the world moments in real time.

Although you got used to the fact that the times are changing faster and faster and that the material and socio-political safety of the 70s and 80s (needless to say that considering all of the issues at that time this was only relative and experienced just by a few privileged ones), even in our Western comfort zone, is changing towards a permanent state of instability how it is known by most people. But the frequency of the last weeks is still too much to process it adequately. All you want to do is hoist up the white flag to be indulged in a short break. 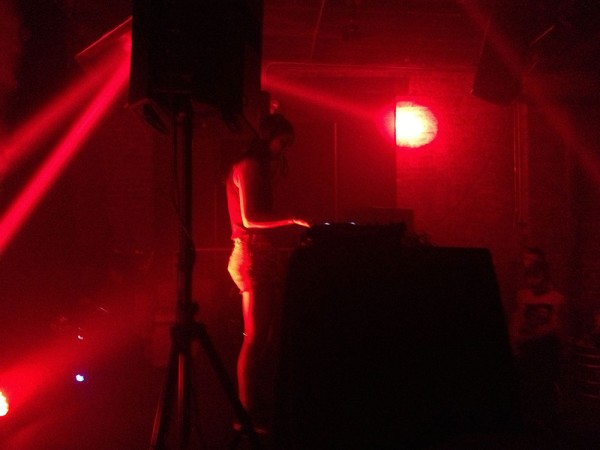 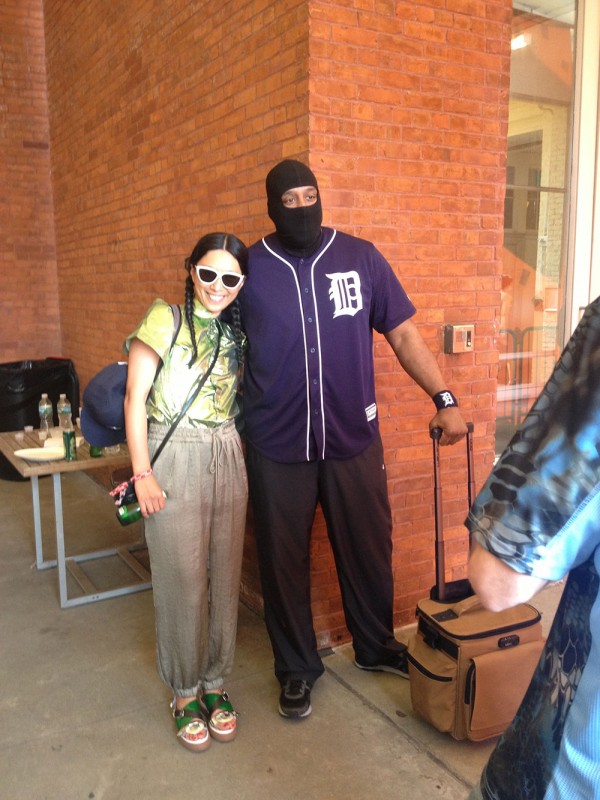 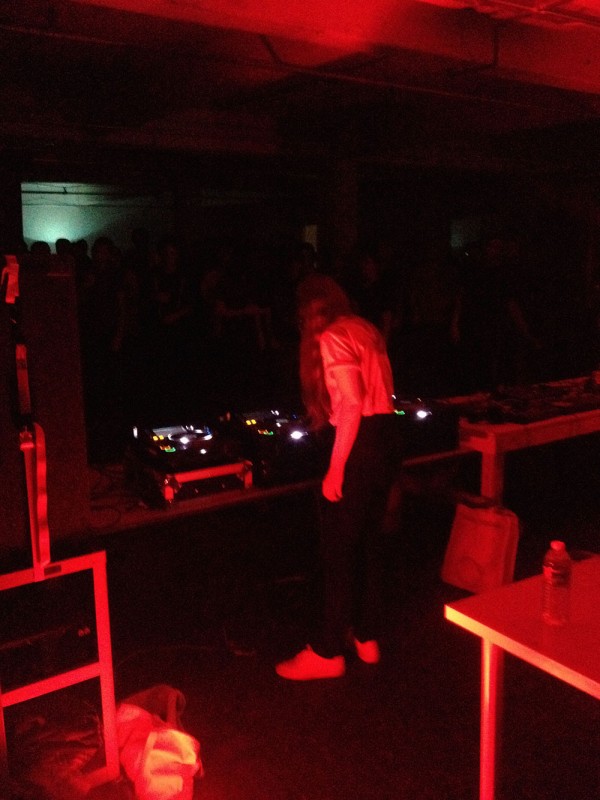 What I actually wanted to write here was a column about the extensive USA-Canada-trip that I made in the last two weeks to accompany Lena Willikens on her North America tour. It was supposed to be about what it feels like to be in this country, that was so important for my cultural socialisation (US punk, Detroit techno, New Hollywood), shortly before the end of the Obama time and the final Clinton-Trump-fight. But the cover of Brexit, and related #postredracism, the attacks of Nice, and the attempted coup in Turkey with radical dictatorial backlash, as well as the series of brutal attacks, police brutality, and counter attacks on the police in the US render this impossible. 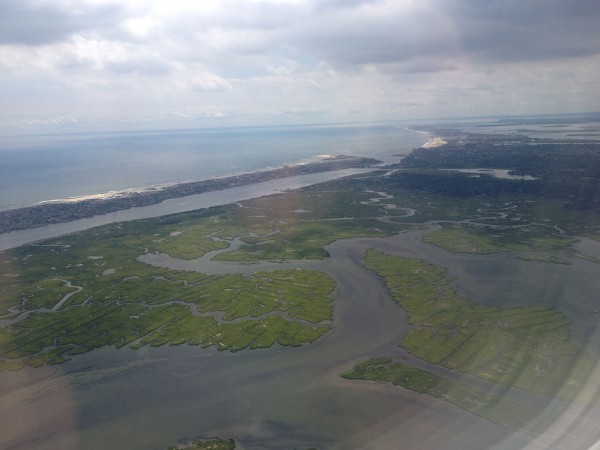 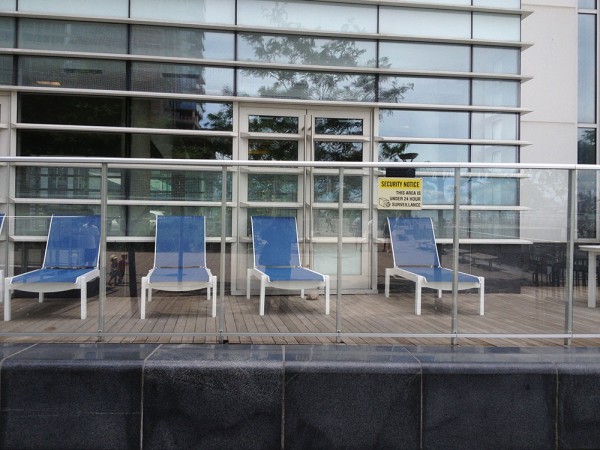 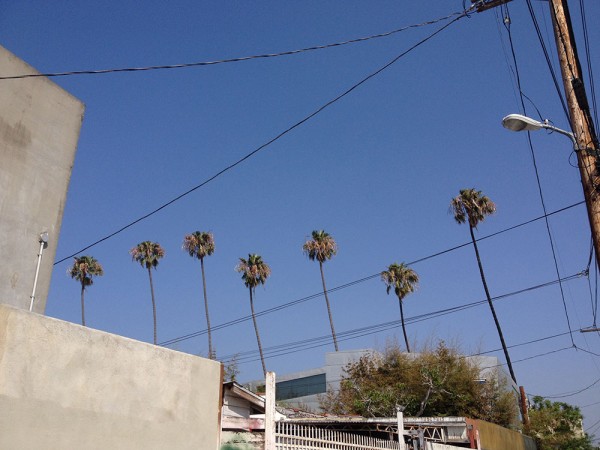 These happenings are too present in all of our lives and at all places: no concert at which the audience members doesn’t look where the potential escape routes are, no party on which you don’t at least discuss if it’s still okay to just party like this right now, while the world just goes bust a little bit more. The fact that you are still going out and indulge in escapism together with others while music is playing, is, on the one side, of course, the only right answer to the climate of fear, and on the other side not just pure escapism anymore, but rather an act of common cultural practice in which letting go and wasting oneself became one with the socio-political exchange about this world in motion. 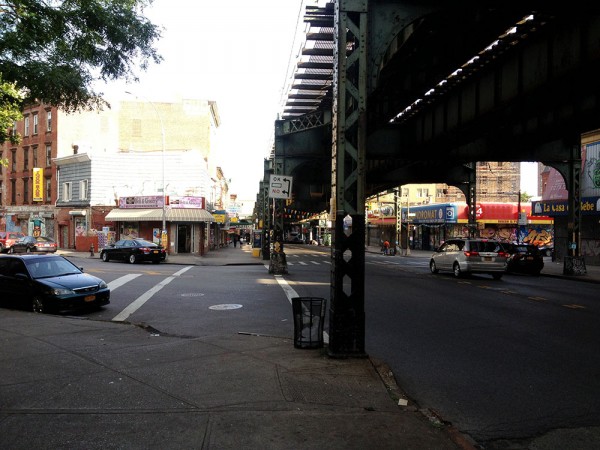 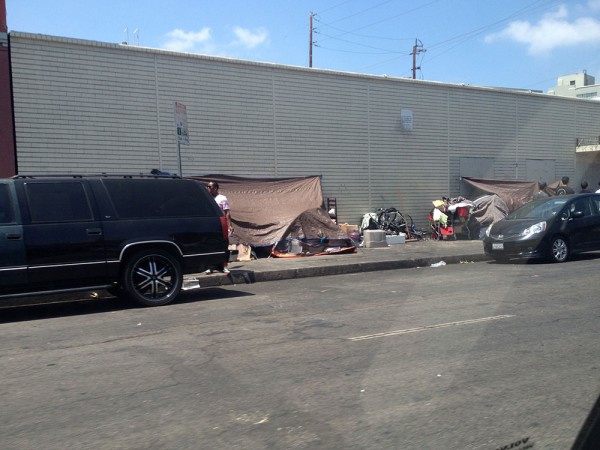 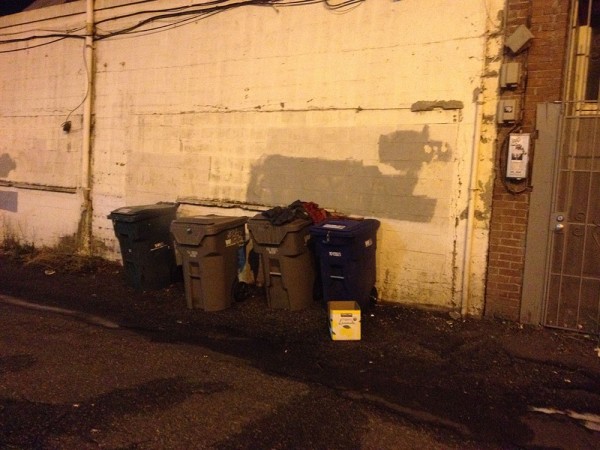 Therefore I perceived the trip as very positive, despite all the dark clouds surrounding us. This is owed first and foremost to all the many people who organize events in their communities with so much dedication (and enough times without a financial interest, in volunteer associations). No matter if in Toronto, Montreal, New York, Los Angeles, Portland or Seattle – at all of these places

I did meet music enthusiasts who are not just interested in music but who are especially interested in the exchange with others, being together with others in the frame of their own communities: Be it a rather classic subcultural biotope of musicians and music fans or furthermore LGBT communities with an explicit political agenda of education, resistance and support. In the most beautiful case, in Seattle, every attendee had to order and pick up his ticket personally from the organizers – and it surely isn’t a coincidence that especially at that party all of the so called minorities partied together exuberantly. 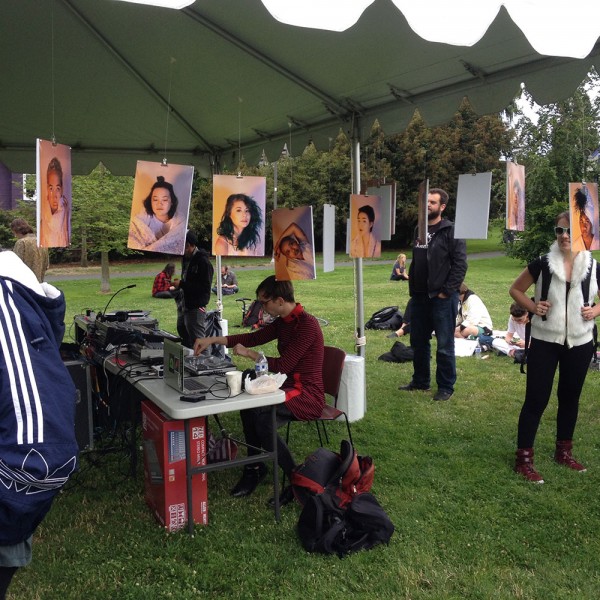 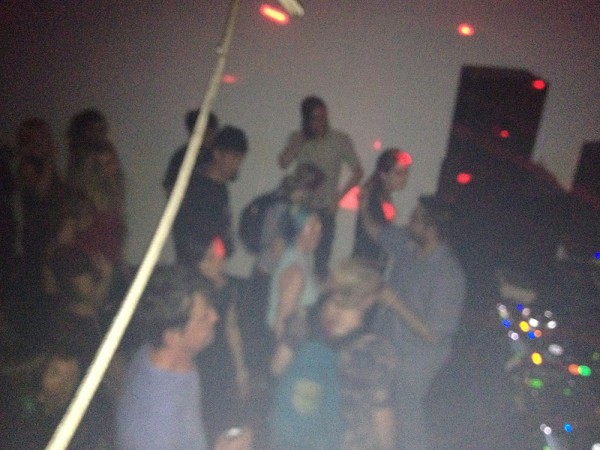 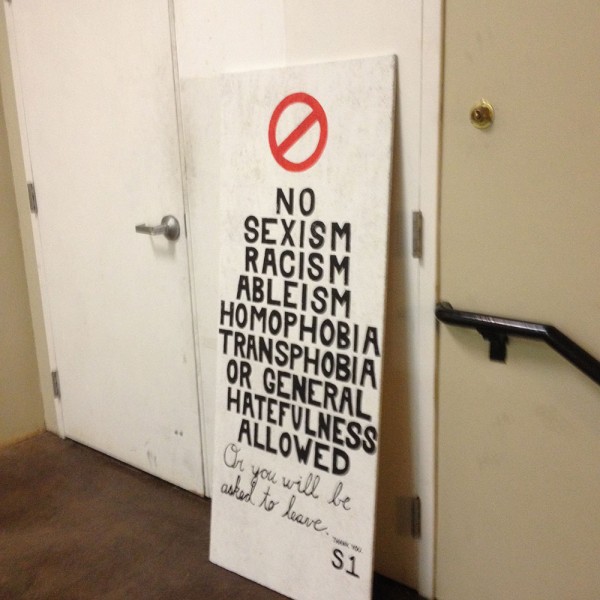 It’s obvious that the socio-political interest and engagement in communities like these doesn’t end with the end of the night. There was a copious amount of discussion – and luckily apart from referral of good and bad which was much more drastic-clear not so long ago. You could feel that a change of thinking is happening in the respect that it wasn’t about strategies of confrontation as much as about those of convergence and intervention. 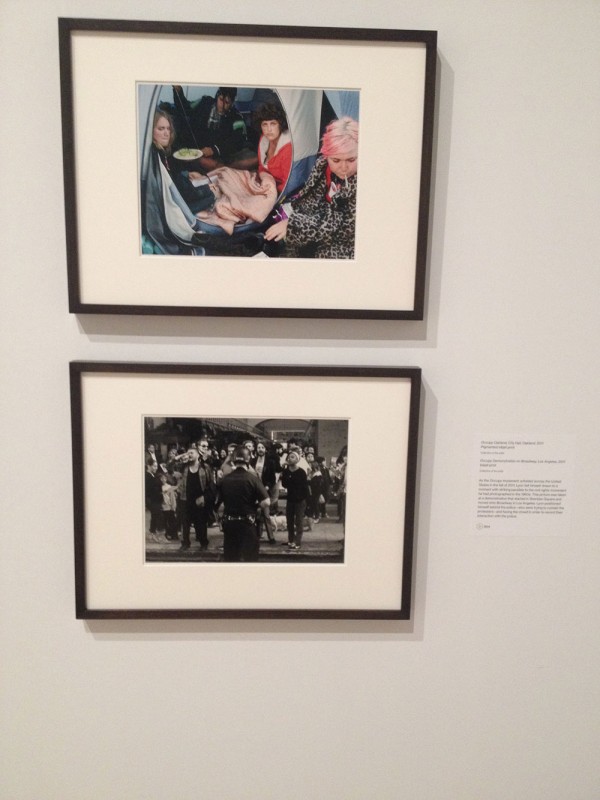 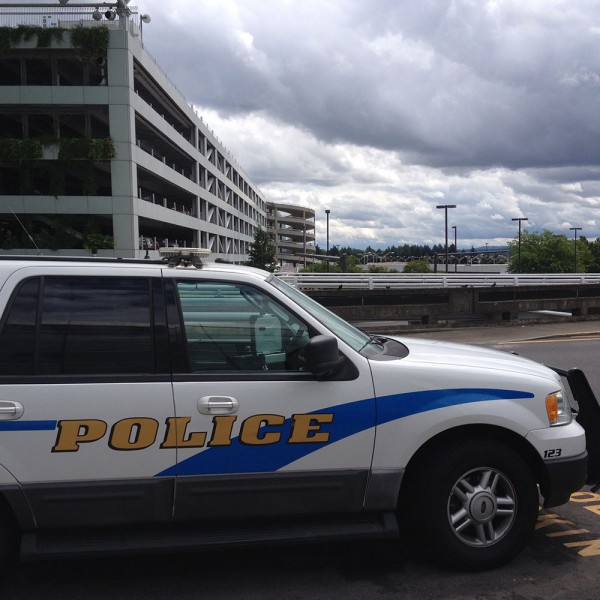 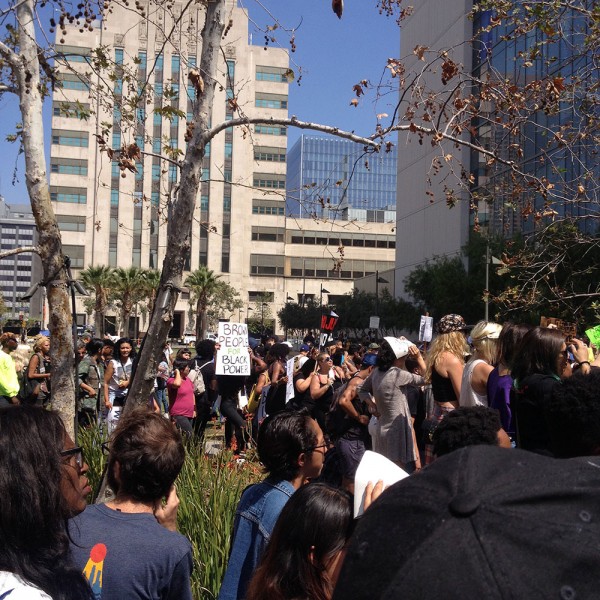 In Los Angeles, towards the end of the visit, a friend took me to a rally in front of the Los Angeles Police Department. The crowd could easily have been found in the club of your choice. It felt great to experience how white and colored people together reacted to the horrible events of the last days, in Minnesota and Dallas – and it was interesting to see that the cops didn’t just react negatively to their criticism. To the contrary, most of them seemed to understand that the only way to reach a situation that would be convenient for both would be together. Just like the slogan of the protest illustrated it: No justice, no peace.

But we are still far from this point. There was hardly any attendant who did not look around himself during the rally to see if something might be weird, a constant act of scanning the faces of protesters and police equally.

If you are not letting your hyper-sensitivity make you nervous, and not letting the stream of never ending bad news pull you down, if you are ready to plunge into the interzone, than you will be able to find enough concepts that bring about courage, and inspiring people who are confronting the upcoming tasks instead of freezing in resignation. It can’t be the option to wish back to the summer slumps and the artificially blown up stories of the good old days. 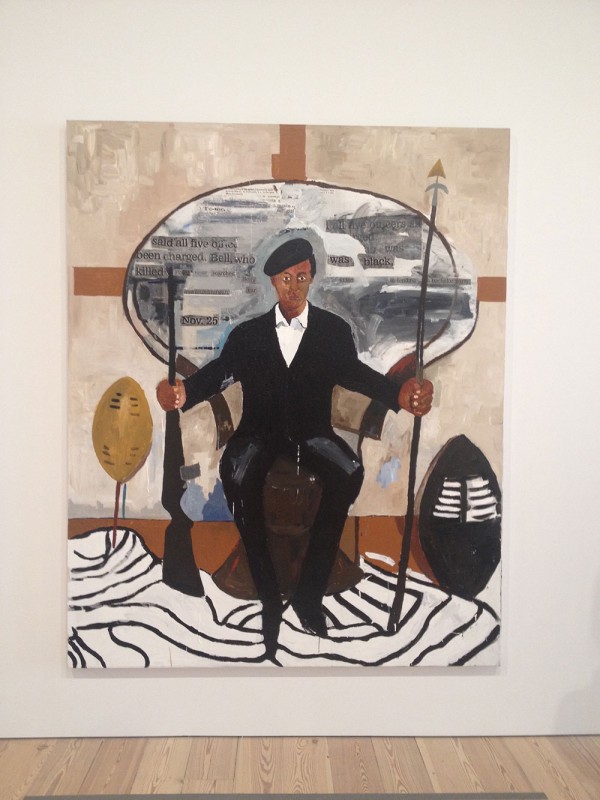 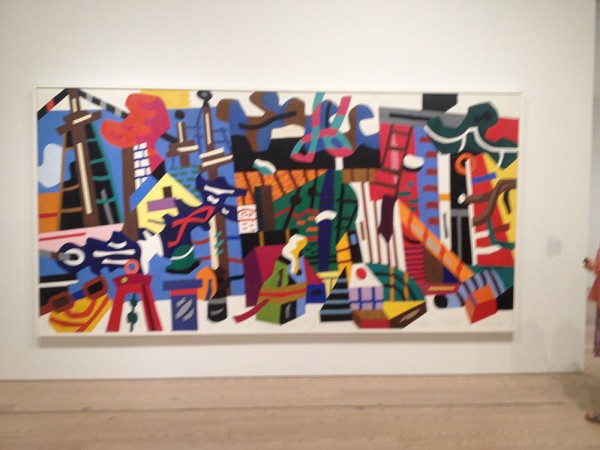 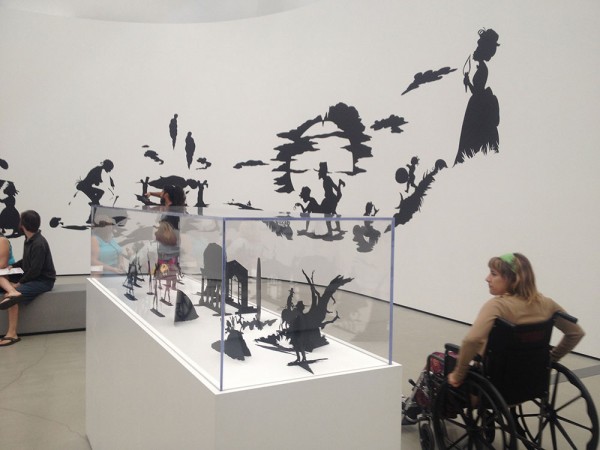 The good news that reached me while writing this column proves how much you can achieve when you work together: Der Golden Pudel Club freed itself from the clutches of the aggressor and persists. A small, fierce Gallic village that should lend you the necessary courage.

During my trip I listened to a lot of Suicide, the band of Alan Vega and Martin Rev. The perfect soundtrack for an America of the dust-covered sun. Well, and then Alan Vega, this incredibly amazing poet of post punk, died at the end of this weird three and a half weeks. 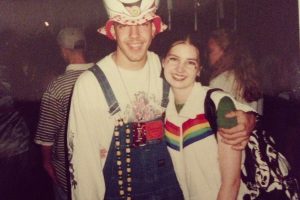 It’s a bit like in horror movies. Nobody knows when “it” arrived, but now it’s everywhere...…