Jaimie Branch: „Some people are born musicians and I am one of those people“ 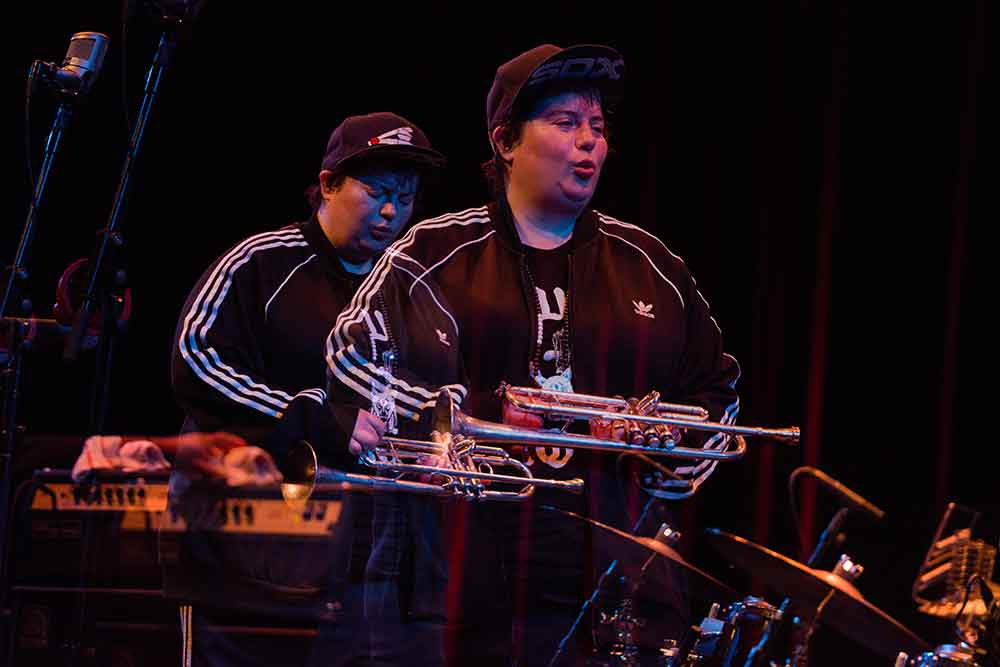 The performance of Fly or Die was one of the most outstanding ones at this years Berlin Jazzfest. Simply but of course not simply as Chad Taylor, Jason Ajemian, Lester St.Louis and Jaimie Branch managed to cultivate a free flowing way of playing together by adding „all the hearts and organs and meat“ to the „basic skeleton“. But also because of  band leaders Jaimie Branch´s very personal way of interacting with the audience. As she drops it: „a reserved audience is a bored audience.“

Jaimie, how did you end up being a musician? When did the idea to be a musician grow in you?
I think some people are born musicians and I am one of those people. By the time I was 12 I knew that music would be my life.

And how often did you regret it?
Not one day.

Do you remember the first tune which was more than some background noise to you, the one that showed you that music is a form of expression, that music is art?
Yep, Joni Mitchell “The Circle Game”. My mom used to sing that one to me, I still think about that song:
“We’re captive on the carousel of time / We can’t return we can only look behind.”
That’s some deep shit. 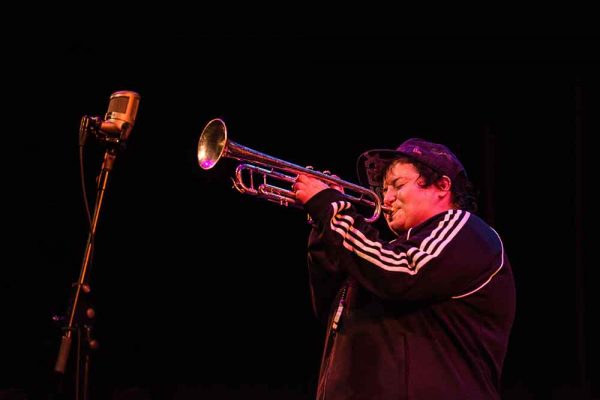 Why the trumpet? How did that happen? And what is the magic of this instrument?
I started playing trumpet in elementary school band, I was nine years old. That was the year we moved from NY to Chicago. If I had stayed in NY I would have played the double bass. There was no orchestra at my new school so that wasn’t an option. I don’t know if there is any more or less magic in the trumpet than any other instrument, but I do know that the trumpet is the closest instrument to the human voice — there are endless ways to inflect the sound. Like with the voice, a note takes on its meaning with inflections and emphasis. A lot can be said without much movement.
That being said, trumpets can also be acrobats so I guess it’s both things that are dope — subtle acrobats, ya know?

Could you name one special track that brings all of that magic in for you?
Miles Davis, “On Green Dolphin Street” off „58 Sessions“ with John Coltrane.

Jaimie, let us talk about your inspiring performance at the Jazzfest in Berlin. It was quite a special one. I had the impression that a performance likes yours manifested the programming change the festival is experiencing right now with Nadia Deventer being in charge.
Coming from that: I loved the way you challenged the (in the beginning) quite reserved audience from the first second on, asking them to be expressive and loud and enthusiastic about the music they have seen so far. Do you always confront the people like that?
I don’t remember any confrontation… but a reserved audience is a bored audience in my opinion.

How much of the discussion about the new direction of the Jazzfest did you catch before the performance anyway? Did you have long conversations with Nadia Deventer about it and what it means for your performance?
Not really. I knew Nadin was purposefully inviting more forward thinking bands for her inaugural jazzfest, but that’s about it! She did a great job.

Talking about conversations: how do I have to image the group dynamics of Fly or Die. To which degree are the performances scripted and how much freedom to walk off is within them?
There’s a basic skeleton to the performance, and then we add all the heart and organs and meat. 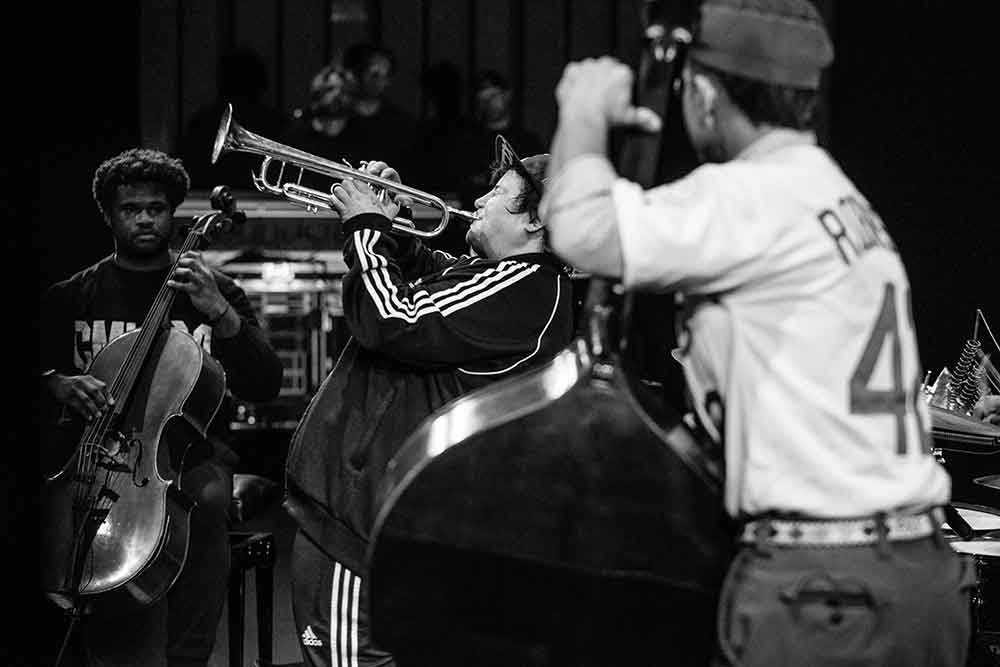 Jaimie, maybe you could drop at that point some words on how your quartet with Chad Taylor (drums), Tomeka Reid (Cello) and Jason Ajemian (bass) found together and how the group is bounded?
The band formed for a performance of International Anthem Recording Company’s (IARC) band the Nick Mazzarella Trio, I set up the show and put together a band of Chicago homies that I thought would be complementary to Mazzarella’s band. Scottie Mcneice and David Allen from IARC were at the show and hit me up a couple months later about making a record. So that’s how that all happened.
Since the beginning of 2018 Lester St. Louis has taken on the cello chair and the band has flourished in ways that are exciting and maybe even unexpected. As for bond, the band just got off a month long European tour and I feel even more like these guys are my brothers. It’s a nice feeling and a great jump off for making music.

How different are those group dynamics from your earlier bands, like Princess, Princess and Block and Tackle for you?
Those two bands are very near to my heart. “Block and Tackle” was one of the first bands that I composed for in Chicago and was a three horn with bass line up. “Princess, Princess” was my first free-jazz-band-band. A band-band, like we played a lot of shows together. “Princess, Princess” played every other Monday night at the Skylark in Chicago, two sets a night, for two years. The music was completely improvised. All members of both bands remain close friends.

It is only one year ago that you released your album „Fly Or Die“. Do you remember your feelings the first time you relistened to the record at home? Did the recordings went the intended way? Are you happy?
“Fly or Die” came out right — and that’s coming from somebody who doesn’t really believe in right. So yeah, I’m happy.

I think you were the only artists of the two nights I participated that used the word  fuck quite often on stage. As funny as this sounds in 2018, it felt as a huge challenge to some of the old jazz folks in that room. Coming from this, I wondered how open minded you experience the jazz world regards an attitude of not caring about the conventions?
I can only do my thing and be me. I can’t possibly be concerned about what someone(s) might think about me, it’s none of my business.

You studied at the New England Conservatory of Music. How much of a balancing act between the own character and the institutional matters was that?
New England Conservatory is a special place, an incubator of sorts, but it ain’t everything. I knew that going in and more importantly knew that headed out — I had a lot of incredible teachers and mentors while there Joe Morris, John McNeil, and Steve Lacy to name a few.

You are currently living in New York (where you’ve been born). How is your relationship with the city going? I mean, it is not exactly the easiest city to make a living and concentrate on your art these days, right? How do you manage that challenge? And how do yo see the development since your teenage days in Red Hook, Brooklyn?
NYC is a great place for tough people to get tougher. I am not afraid of working so it’s working out. Right now my job is to make music, sometimes my job is to make coffee. I’m shooting for more music making and less coffee making, so I’m concentrating. I didn’t spend my teenage years here — I was in the Chicago ‘burbs, but I do live in Red Hook now. The whole city is being bought and sold by the rich on the regular. Unfortunately that’s a story that can be written about almost anywhere right now.

Before that you lived in Baltimore (where you attended the Towson University for a Master in Jazz Performance) and Chicago. How much does in an international globalized world the city one lives in still matters? And how different were the scenes there?
I mean where you live is where you spend your heartbeats and breaths, that shit is important — surroundings matter. The three cities you mentioned have their own characteristics, beauties, and challenges. One thing I have witnessed though is that there are gifted musicians everywhere that I have ever been.

To come to the end and back to the Berlin performance: Are you happy the way the performance went?
Yes.

And one last question: at some points in the concert you showed the audience the back and made your drummer smile by sipping on a little flask. So, are you a single malt or a bourbon person?
That was tequila. But I’m a bourbon person, you see — I’m from Chicago.