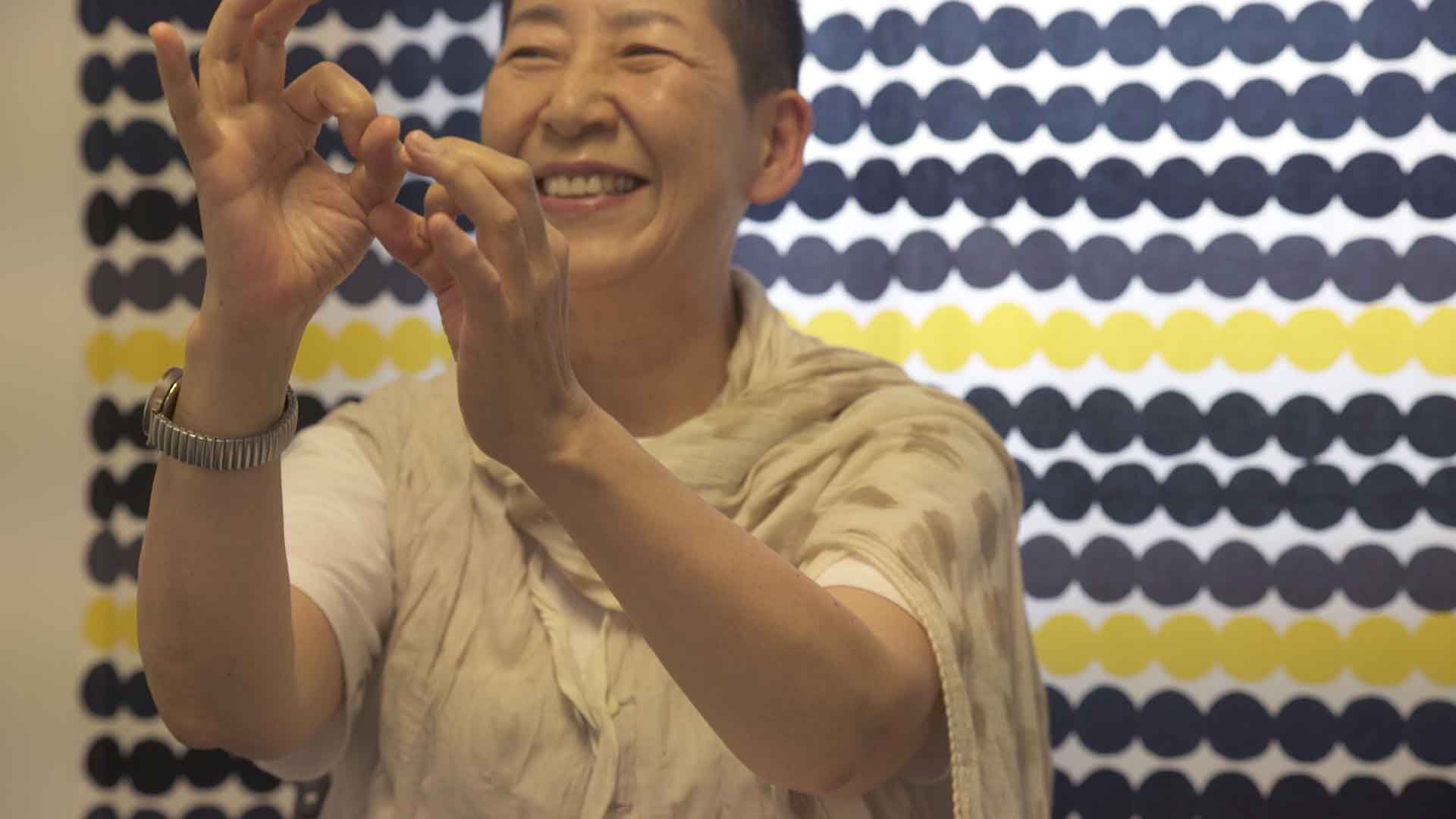 There are some stories that sound way too good to be true. For example that of a Japanese percussionist who worked years towards her goal to become part of an international orchestra just to realize, minutes before getting on stage with the Berlin Philharmonics for the first time, that this is not the right way for her.

But that is exactly what happened, affirms Midori Takada, and is somewhat amused about the irrationality that to a certain degree resonates with this artistic consequence. So her debut concert was at the same time actually the last concert she would perform with the orchestra. “It wasn’t a decision, but a necessity. It just did not feel right. I could not be here today if I had to play a concert with the philharmonic orchestra in Berlin.” 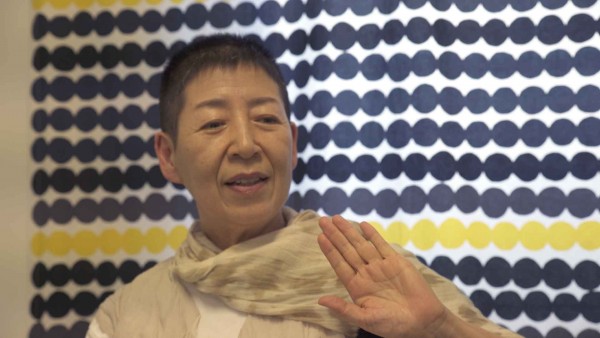 Our discussion takes place in the press area of the Flow Festival in Helsinki where Midori Takada will perform a concert on the next day. This is owed to one fan who put the three records she released between 1983 and 1999 on Youtube and thereby triggered a downright hype for the 66-year-old Japanese percussionist. Lately, this was additionally pushed by the rereleases of her debut album “Through the Looking Glass” on the hipster labels Palto Flats and We Release Whatever the Fuck We Want Records.

For the last 34 years, Midori Takada had accepted, with the serenity of a zen priestess, that the adequate perception of her work as an artist is not enforceable. This serene view on her existence and the artistic consequence on her walk of life was only possible since Midori Takada has been encouraged to a way of discrete thinking and open-mindedness from an early age – she grew up in a liberal, highly cultural home. Her father was the founder of the first society for Irish literature in Japan; her mother did study classical piano in Shanghai. Although her parents at first made Midori take piano lessons when she was three, but her detestation could not even be managed with cookies since her wish to become a percussionist was just too powerful. 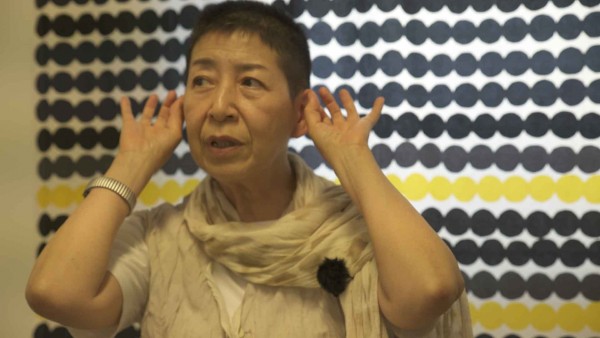 Listening to Midori Takada telling stories is great. As naturally as she switches between English and Japanese (which is being simultaneously translated by her manager), as good is she in combining serious explanations, disarming disclosures and funny parts.

We are talking about the current success of “Through the Looking Glass”. Midori Takada is very happy about it now but she also emphasizes that its long absence had created a grave life crisis for her. With Japanese composure she refers to a higher purpose which is outside of owns own possibilities: “In 1983 I did record an album and no I am continuing on the path that I started pursuing back then. The time since then was artistically necessary for me – and maybe also for the world which had to learn to understand me.” After a short pause, she adds that now Japan has to learn to understand her as well. Due to the demand, Midori Takada was invited to play in the USA, Australia, Germany, England and on this day Finland, but nothing has been happening in Japan until now. Some sayings are true all around the world, even in Japan the prophet does not count in their own country. 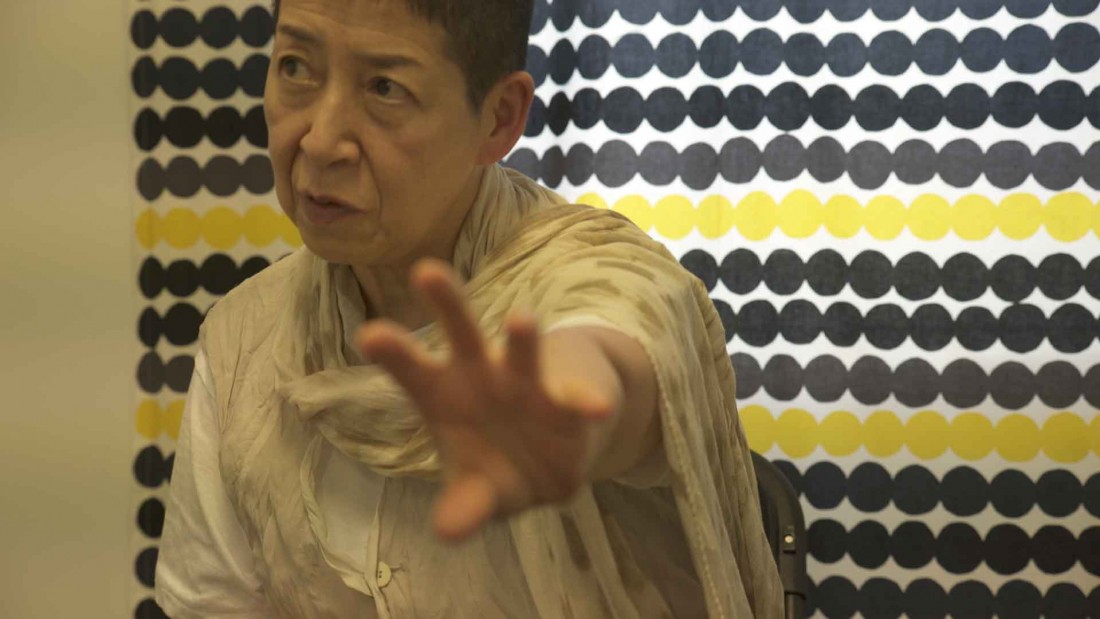 “That the album didn’t get recognized in Japan back than, might have been down to the fact that it can’t be attributed to any genre,” explains Midori and adds: “It was difficult to sell my music since the music critics just were not able to find a vocabulary for it.” This is a reasonable assertion because the difficile recording process has been prescribed deeply into the songs on “Through the Looking Glass” and is still resonating with them today. “The recording sessions were very exhausting”, remembers Midori Takada. “I just had two days time for it; therefore I was constantly in motion. The perspective has a very significant role for the songs. For every single sound, all played by me and later layered on top of one another, I had to find the right distance to the microphone. It was a real room installation.”
Consequently, the album’s four songs “Mr. Henri Rousseau’s Dream”, “Crossing”, “Trompe-l’œil” and “Catastrophe Σ” are unperformable. “It is part of the album’s concept that it will never be put on a stage, even though a lot of people might want that now.”

Another fact that Midori Takada can put into perspective for herself is the fact that she was only able to release three albums – “Lunar Cruise” and “Tree of Life” in addition to “Through the Looking Glass” – with long time gaps between, due to the lack of attention in her career. “For some musician recording an album is the most important part,” she remarks and leads the conversation on to her many-faceted artistic activities of the past decades. “I did compose and performed permanently. But my performance style did change over the years, not least because of my cooperations with director Tadashi Suzuki for theatre productions – not just as a musician, I have also been involved as an actress for the plays.” 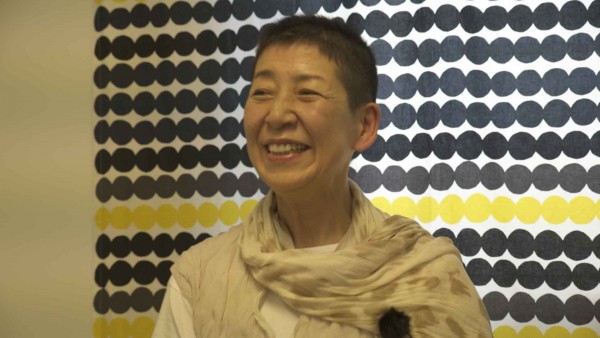 The theatre work made it possible for her to retain the integrity of her artistic position without having to turn to the open market, points Midori Takada out. Thanks to this she was able to become acquainted with the traditions of African and Asian percussion music, which is a genre she started to focus on with her band Mkwaiu Ensemble immediately after releasing “Through the Looking Glass”. Joe Hisaishi was also involved in, who later became the main soundtrack composer for the anime studio Ghibli. In the 80s and 90s, Midori Takada did work together with artists like Kakraba Lobi (Ghana), Lamine Konnte (Senegal), Farafina Band (Burkina Faso), Chi Seong-Ja (Korea) and Kang Tae-Hwan (Korea) and often traveled to their home countries. Those travels taught her that she, even if she doesn’t see herself as a political person, has to learn what is happening in the world to comment on what is happening: “Music is not just entertainment for me. Music feeds on the real life, it is about life and death.”

It suggests itself to someone who speaks words such as these to lead upcoming artistic talent. Midori Takada has been doing this for over 20 years at the Tokyo National University of Arts, though never with such a vehemence but rather in a very modest way. Where Western lecturers with an artistic catalog like to bring themselves into play permanently, she erased herself from the lessons so to say. “Students are supposed to learn the essential things to be able to position themselves as artists in society. They have the right to choose freely where they are going, if they are more inclined to Western music or traditional Japanese music, to Steve Reich, Mozart and Beethoven or the original music of the samurai. I consider it my function to teach them the basics: how do you play the drums, how do you capture the right sound – my own thoughts are to be kept to myself.”
Instead, Midori Takada has experimented a lot with her body as an instrument in the process of the genesis of electronic music over the last 20 years, fed by her interest in cybernetics. “I am using the sound of my body. There are so many sounds inside of us: the electricity of the muscles, the heartbeat or the bloodstream. We are sound. Being alive means being sound.” And therefore she put microphones on her body years before Matthew Herbert and other real-life-samplers, to measure the alpha waves in her head during meditation and transform them into musical frequencies. “No, it hasn’t been easy for the listeners,” she admits. “But some of them do understand what I am doing, and they will impart the message.” 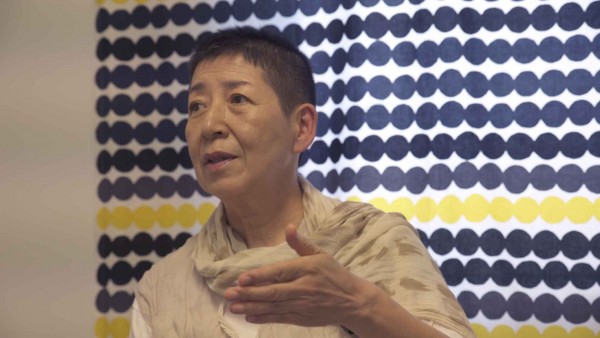 It is rare that an artist manages to combine in such an effortless way her precise artistic work, lived spirituality and worldly humor. She should be granted that the current hype would just be the beginning of a constantly growing interest in her work. The omens are favorable, since “Lunar Cruise” will also be rereleased soon. She recorded the album in 1990 together with Masahiko Satoh, and on it, they combined African and Asian percussion music with influences of minimal music, jazz and ambient, with the assistance of Haruomi Hosono (Yellow Magic Orchestra) and Kazutoki Umezu.

To wrap things up, I want to know from Midori Takada if she considers her own music as emotional? Her answer once more comes of very Japanese: “Some people say that my music was very emotional. In the 70s and 80s, I tried to suppress my feelings when I was playing – but that is impossible. When someone is playing music their heartbeat, their blood pressure and their brain waves are changing. Our bodies are reacting to the music. Why do we not just accept this and indulge in our emotions.”