On her debut ep „Phantom Delia“ the Cologne based producer and dj Lena Wilikens is determined to take us on a pretty dramatic journey. Follow her and you’re guaranteed everything from howling wolves to disorientated hippos – thanks in part to the video series which accompanies the ep.

Together with the artist and Kaput-collager-in-chief Sarah Szczesny, Willikens has produced a video for each song on Phantom Delia. After „Howlin Lupus“, „Nilpferd“, „Noya Noya“ and „Asphalt Kobold” Kaput is very happy to announce that the fifth episode in the series will premiere right here on Kaput.

„Phantom Delia“ takes us on a journey into the world of the Berber. Why not take a look yourself:

Inspiration from a sentimental flashback

Lena Willikens seems committed to ignoring business-as-usual both in her live sets and productions, always training her eye on what’s round the next bend. Her sets gain their energy from a lots-of-genres-at-once style that they’re built on. The Wilikens-way is an energetic but tender combination of wave, electro, techno and more unexpected/obscure elements from world-music.

Those who’ve been keeping up will know she’s perfected this style over the last few years on her „Sentimental Flashback“ show on Radio Comeme. „I realize now, how all things come together in my artistic profile“, she says. „That stops me from getting too much trapped in a routine. The not-for-the–dancefloor orientated radio show is definitely a big influence on my DJ sets.“

Those DJ sets require a lot of Willikens’ time. She weighs a lot of factors ahead of time, from country, to clubsize, set time to the other DJs on the bill and the drugs she thinks people are taking in that venue. „I invest a lot of time as I do not like the fact to repeat myself. That happens quite fast if you just take random records with you. I think about the dramatic structure of the evening, even if it most times it plays out different to how you predict! For example that after a period of straight techno I jack off a bit and go for a more spheric sound.“

These processes, influences and general activity-level are clear on her debut EP „Phantom Delia“ (Comeme Records) – and also why it took her so long. Together with Kreidler member Detlef Weinrich she looks after bookings at the Düsseldorf club/bar Salon des Amateurs, with Melanie Wratil she manages the noise-wave band Titanoboa, and you’ll sometimes also find her working at the Groove Attack and A-Musik stores.

But amid all this chaotic activity, stick on „Phantom Delia“ and there’s no feeling difficulty or delay – here are six outstanding tracks of dark, spooky ambient music, somewhere between wave-electro and oriental-techno. The wolves howl, the artist herself groans and the hippo is confused and disorientated while the beats, claps and hi-hats vibrate.

„I feel like a puzzle from one million influences, without any control on them“, Willikens explains. „I mean I start with the imagination of a certain atmosphere for the track, but in the process I lose control and end up somewhere else – which is a really great feeling.“ Willikens may be all about details, highly meticulous and self-critical, but she retains an admirable skill for letting things go nuts.

Matias Aguayo, (owner of Comeme Records), calls her a star. By that he means, that she has a huge aura. She’s expressive and willing to share, not your general shy techno artist. Where industry figure like BBC1-radio-host Annie Mac states blandly that there is no more need of feminism in electronic music, Willikens retorts: „It is so sad that our world is still male dominated. You get a good impression of the state of art by looking on the regular club bills. Most of the times I feel very alone out there under men. I am not saying that woman should be booked cause of their gender, but it would be nice if people would at least reflect that we have a disparity here.“ 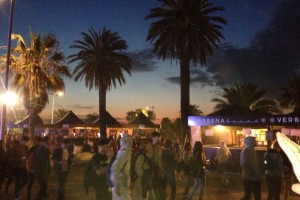