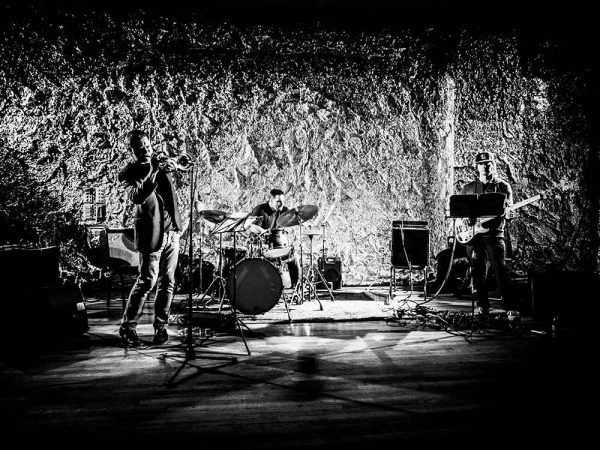 Peter, why did you chose the trumpet as your instrument?
Peter Evans: 80’s Miles.

Is the combination of drums, electric bass and trumpet an axiom for the existence of Pulverize? Or is the band thinkable with more or different instruments? How elementary is New York for the existence of Pulverize?
Peter: For me it was about the combination of people, and more a happy coincidence that the instrumentation worked out the way it did. 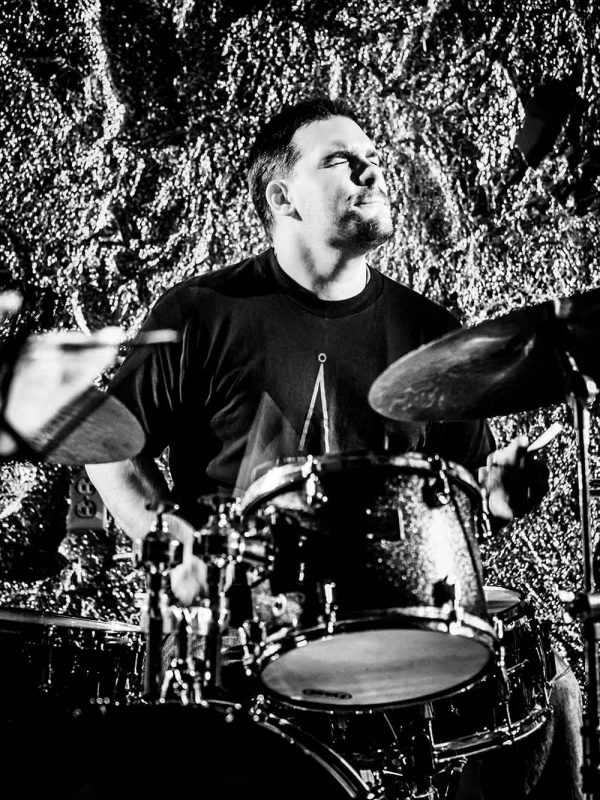 Is there actually such a thing as New York existing? Does the local scenes in Upper Manhattan, the Lower East Side, Brooklyn or Queens share commen aesthetics and do they speak to and get contributions by the same folks?
Peter: There isn’t a specific „scene“, more like many overlapping scenes. All of us do a lot of different things, and personally I’ve found it helpful to be at the periphery of a few different scenes, rather than at the center of one. It feels more natural to me.

How big is the influence of gentrification and the constant increase of living costs on on the Jazz scene of the city?
Peter: It has an enormous influence! Not just on the venues and where they are located, but what kind of people can open a venue or for that matter exist in the city making music at all. Everyone has a different solution to this problem. New York has been good to me personally but facing another cycle of finding an apartment and the ever increasing cost, I’ve decided to pursue a different path and move to Lisbon.

And what does that mean for you personal? How easy is it to make an artistic living and concentrate only on the projects one wants to make rather than saying yes to other paths cause of money reasons?
Peter: It is very difficult to make a living from playing only. I do it, but I think this is a combination of a lot of factors. I tour quite a lot and also play in NYC. I’m probably on the road six months out of the year, which I enjoy very much. I need time off the road to spend practicing, composing, reflecting, studying and reading. It’s a real luxury if I can find any time for those things, but they are essential for me. One thing that has helped is that the „projects I want to make“ fall under a quite flexible framework- I’m not interested in a very narrowly focused type of activity. I think most of the musicians I work with, especially Tim and Mike for instance, benefit from being highly adaptable not just in terms of skill sets, but in terms of aesthetic range. 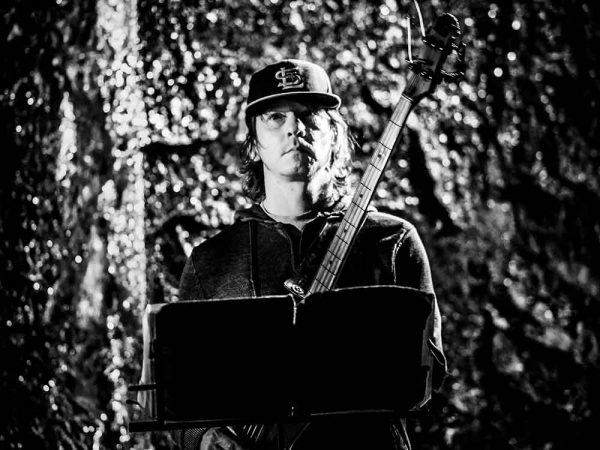 To me your music is quite unboxable. By that I mean that you are not coming from and positioning yourself in one explicit corner of Jazz. You seem to take the freedom approach originally building the core of Jazz by the name and search and find inspiration in noisy incarantions and improvisational songs as much as in Free Jazz, in well composed, and comfortable accessable ones or in genre-mixing ones flirting with influences ranging from Classical Music to New Music.
How come you are so free?
Peter: I don’t think this is such an unusual phenomenon, at least in my circles! I don’t really subscribe to the idea of genre in terms of my own musical activity, although I understand the need to label things from the point of view of organizers, record labels, press. I am interested in connections between a pretty wide range of musical practice, not just in terms of where the music comes from but also when. The more I study, the more I find pathways through many kinds of music that help me develop my own voice. 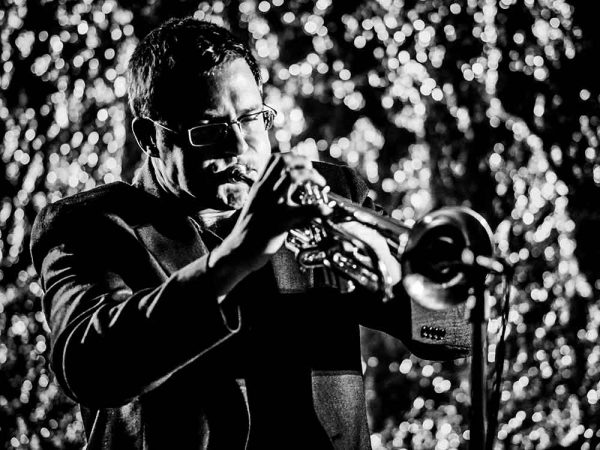 Peter, since 2011 you run the label More is More Records. One could argue that in this state of the music industry ones must be crazy to start a new imprint. What did make you ignore all the arguments against such a step and cultivate this garden? And how would you descrive the artists you ask to join the label and the music you publish?
Peter: I would argue that since the record industry is such an amorphous blob, where there are remnants of nearly every type of activity (big label, musician run labels, streaming, physical media), the landscape makes it highly necessary for me to rely on myself for releasing music. The things a label traditionally provided (press, fees, logistical help, mixing/mastering, production) are not really existing except in a very very few cases. And even the cases for those few labels, you have to jump through a lot of hoops to be signed, then all the sudden the label is telling you what to do. I had good experiences with some small labels but after a certain point it seemed almost easier and more satisfying to do it myself. I can’t say that my More is More operation is some big deal; it’s mostly my own music and at this point mostly digital, although I still make physical products to sell on the road. I really like making records and believe really strongly in the work I am putting out. People do listen to it and I’m finding recently (last 2 years) that Bandcamp is a really good platform for someone like me.

Does runnuning a label also have an impact on you as a musican? Does it help you understand other artists better and by that help you musical interaction with them?
Peter: Not so much. The label is something I’m doing mainly for myself. I can advise musicians a little on how to best deal with the problem of making records though, since I have some experience. I often suggest people learn to do things like this for themselves, at least once, just to get that experience.

One last question: Peter, until 2015 you had together with Moppa Elliott, Jon Irabagon and Kevin Shea the band Mostly Other People Do the Killing – refering by this to Lew Sergejewitsch Termen, the orginator of the Theremin who claimed (of course with a heavily ironic tongue) that Stalin was not that bad of a guy as he always was sending other to do the killings and not he himself.
I come up with this as I write down the question on the 3rd of November 2018, marking the 25 anniversary of the death of Leon Theremin (as he named hinself later).
So, the question: How political do you perceive your artistic life and would you say that your music is politcal?
Peter: I never really understood that quote, or whether it was sarcastic or not… In fact I don’t even know where to find documentation of Theremin saying that! Do you?
Our time is marked by an incredibly superficial, spiritually empty social landscape. I feel this interacts with politics and affects the situation extremely negatively. Music such as this is trying to show a different and deeper way human beings can interact and co-exist. For me the most important thing accentuated in the music is the combination of individuals self-realizing their own voices and potential, all while in the service of a greater and communal goal. There is something vaguely Utopian about it, and it’s interesting to me how such a constructed society sounds! Improvised music/Jazz does come from a pretty specifically political tradition, both in USA and Europe and I think that’s something that should be retained. I look at my own work as coming from a kind of Humanist type thought, which is extremely out of fashion these days, haha, but desperately valuable. 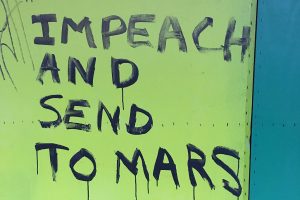 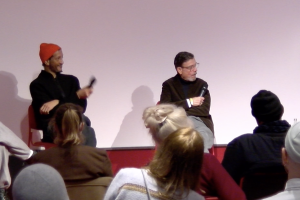