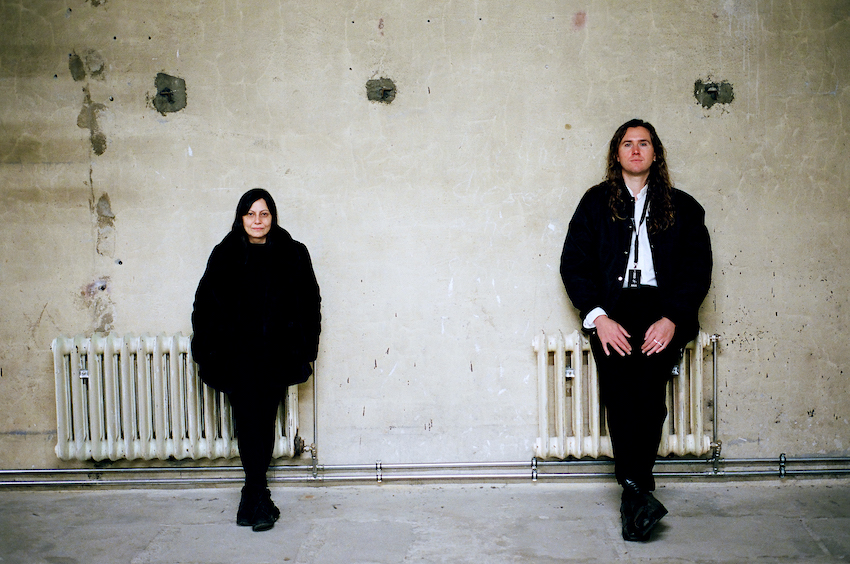 Farahnaz Hatam & Colin Hacklander organized lately together with OUTER (the team behind Atonal Berlin) the three days festival X100, dedicated to the work and legacy of Iannis Xenakis with performances of Kali Malone, Marcus Schmickler and Moritz von Oswald among many others and Xenakis interpretations by the ones like Sergio Luque and Diana Mos; on top Hatam and Hacklander performed themselves with their LABOUR imprint the brand new work “LABOUR presents sungazing”.

Ahead of the continuation of “Sungazing” at HAU Hebbel am Ufer on 3rd of December Farahnaz Hatam & Colin Hacklander  answered some kaput questions.

Farah, Colin, the festival X100 was conceptualized „in the spirit of Iannis Xenakis“ – what does the work of Xenakis mean to you?

We believe the role of the avant-garde today is to create new systems of thought in music and presentation to create new modes of being together. Xenakis created wild and precise systems of thought and composition, and like this stands both as a role model and a muse to so many. As composers we engage with a number of his more hermetic techniques and ideas, but across the musical scenes and communities we are a part of, his presence is palpable – experimental musicians are so stoked on Xenakis – whether it’s the noise or immersiveness, the application of mathematics, the sense of ritual or his original status as an outsider to music.

How did you chose the other artists for the festival?

Together with the organisers of Berlin Atonal, we anchored the program in the Xenakis works for percussion, strings, voice, and the masterful electroacoustic pieces. From here, the idea was always to contextualise Xenakis in the contemporary avant-garde which includes a spectrum of practices and concerns not necessarily, though often, directly related or indebted to Xenakis. Like this, we chose contemporary artists we felt are best representative of this diverse musical landscape of which we take part. 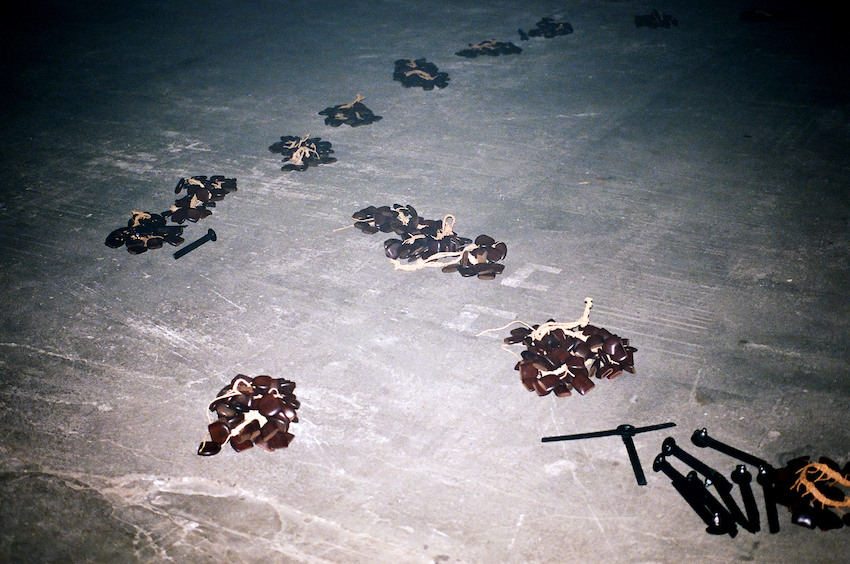 For me your „LABOUR presenting sungazing“ performance was the absolute highlight of the festival as you a) perfectly worked with the whole Kraftwerk as the soundspace and b) also as a kind of theater stage. You engaged the audience to constantly walk around and experince the plot and the protagonists from multiple perspectives. Can you share a bit of the working process on the piece with me?

Ah thank you so much! For “sungazing”, we chose to hybridise the concert situation with a format we’ve been developing and call ‘sonic activations’ which sonically explores architectural space to encourage active listening.

We began with this obscure practice/idea of sungazing as a topic from which to reflect on a wide range of cultural phenomena we’re interested in. We created a ‘reader’ and shared this conceptual starting point with our collaborators…this guided reading ranged from Zoroastrian rituals and the story of Zurvan’s birthing process, to the story of Icarus, from Nick Land’s poisonous ‘The Dark Enlightenment,’ to the inspiring practice of Hira Ratan Manek.

With the various ensembles involved (string, percussion, voice, visuals, dancers) we are setting in motion processes both spatial and stochastic, and super-imposing them according to the score. 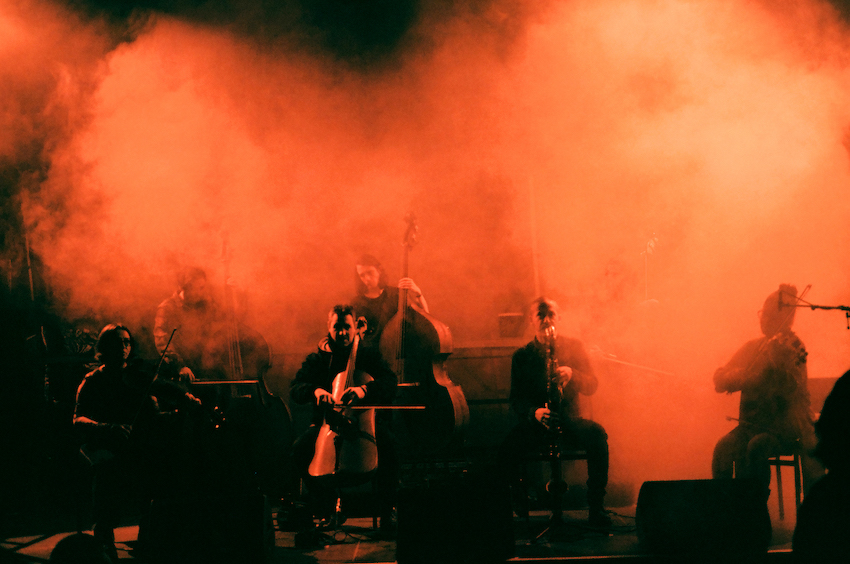 Continuing on the formal level, in “sungazing” we establish various poles, so to say, to oscillate between; and from these different modes we find compositional tension from which the piece can develop. Two such poles we explore for example are amplified and un-amplifed sound. The piece begins by establishing two stages, one with the drumsets and electronics, the other with the string sextet and bass clarinet. After only some minutes, the instrumentalists begin repositioning themselves in the space, off mic, as the spatial periphery is simultaneously activated with 25 percussionists surrounding the audience – from here a number of events occur with vocals, hand percussion, material inventions using large printed fabrics, bass clarinet and string ensemble. We’re fascinated by the juxtaposition of un-amplified sounds in acoustic space, with the full potential of large speaker stacks. One assumes a fundamentally a different mode of listening and of being within such an acoustic environment.

As we go on in the piece to embrace the full potential of the loudspeakers, the music is created by Farahnaz in SuperCollider, where she programs all the processes and synthesizes all of the sounds. Here she processes the string ensemble and transforms their sounds. Later in the piece she presents wavesets and synthesized alarm sounds. Another set of poles we engage are those of regular and irregular (non-grid) time. 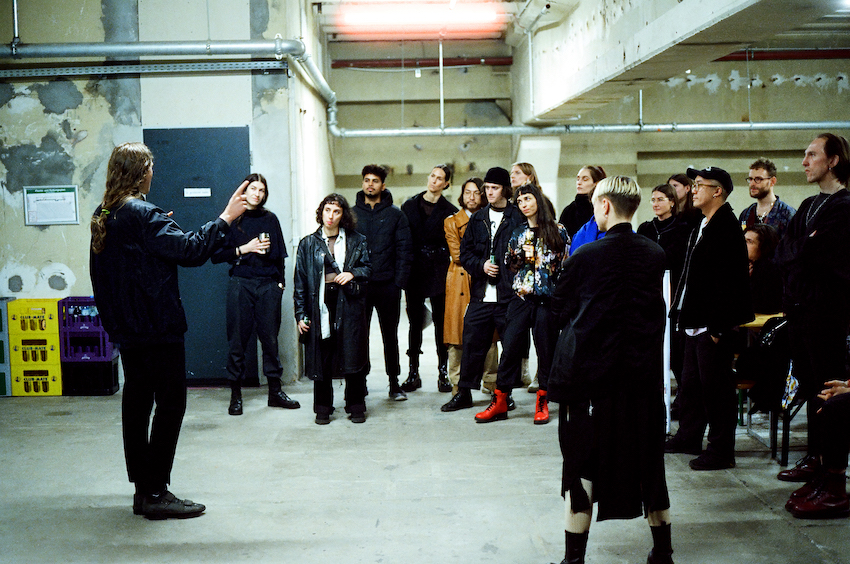 You therefor worked with dancers, musicians and performers, the logistic must have been quite a challenge, right?
How did you adapt to such a dimension of room and team? This was your biggest happening so far, right?

Yes! It was very exciting to bring together so many people to conspire with… With the various ensembles involved (string, percussion, voice, visuals, dancers) we are setting-in-motion processes both spatial and stochastic via cues, and super imposing them, so creating a score and teaching the parts. We are familiar with the space after premiering all of our major works there (“next time”, “die consciously”, “nine-sum sorcery” and “hit of enlightenment”) and have gained some confidence in exploring the space in all the relevant ways we can imagine… Because the Kraftwerk is an old powerplant used as an event location and is not a theater or concert house, we must devise special methods to prepare production-scale works in a concert situation. We rehearse each ensemble separately, we model elements that are missing, we combine elements to the extent possible, then we hear and feel everything 100% all together for the first time during the show! 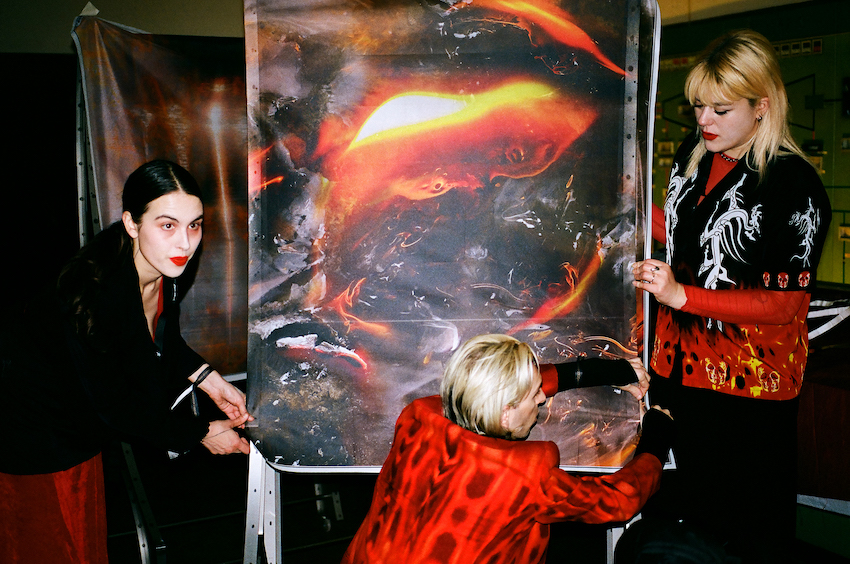 I mentioned before that I liked the way you played with the sound perception of the audience. Not all of the other performers managed that. During most shows the audience persisted in one pose and just looked at the artist – even tho the actual music asked for a constant change of head and body position as artists like Sergio Luque and Marcus Schmickler for example played incredible well with the ten boxes ind the room.

Yes, both Schmickler and Sergio Luque sounded incredible in the space on all the stacks of speakers! Indeed, it’s true that people tend to rely on certain traditions or preconceptions of experiencing a concert, even in experimental settings, with perhaps a visual focal point being the most desired. The sense perception preference of today broadly priviledges the visual to a great extent. Our hope is to bring awareness to listening through sound and the associated tactile elements.

With our piece “sungazing”, we tried to de-centralise focal points through both dismantling the stage situation through ensemble movement, and also through a strategy of simultaneity, where each audience experience is different depending on where you happen to be, or where you move yourself. Our hope is never to confuse, but to create a situation where anything can happen… 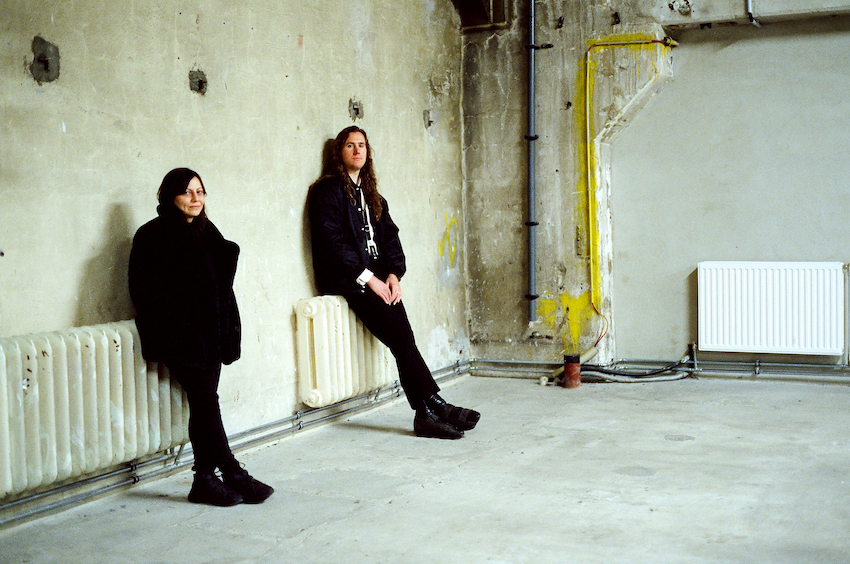 If you mean our credentials for doing such a festival, we would simply describe ourselves as Xenakis enthusiasts who have not only studied his ideas and performed his works, but have a pulse on things through all the scenes we’re involved in.

Do you plan to (co-)curate another happening like ths in the future? I mean this was not really a new field for you as you run for a long time a venue in Neukölln.

Curation or organisation is just an extension of our artistic practice – we certainly do not consider ourselves to be curators although we’re always excited to be invited to share or develop our vision for a project, whether it’s X100 or the Sound Studio at Callie’s.
The festival has been a big success in so many ways…and we align so much with the Atonal crew. We’ve always been interested in how music and art exist socially in specific times and places. Our former venue N.K. facilitated such social gatherings in a raw cultural context that brought new and sometimes peculiar light to things…

Next up you gonna perform at HAU on 3rd of December. What to expect for this one?

“sungazing” was always conceived to have a changing set of elements and scale, so different versions of a work all under the title ‘sungazing’. “sungazing” at the HAU2 is a continuation of “sungazing” at Kraftwerk, and is essentially an entirely new piece featuring the solo performers Cassie Augusta Joergensen, and Daniil Simkin of the Staatsballet Berlin, and video with our close collaborators Evelyn Bencicova, Enes Güç and Zeynep Schilling. We’ve been working with Johnny McMillan also of the Staatsballett, and Marcelo Alcaide is developing the costuming and Marcel Weber, MFO is the light designer. We’re interested in what each parameter proposes for a work, from the space to the situation to our collaborators.

And on 11th of December you play at Berghain as part of the 18th birthday celebrations of the club. What to expect fo r this one?

Alright, we better come! Thanks for your time here, very much appreciated. 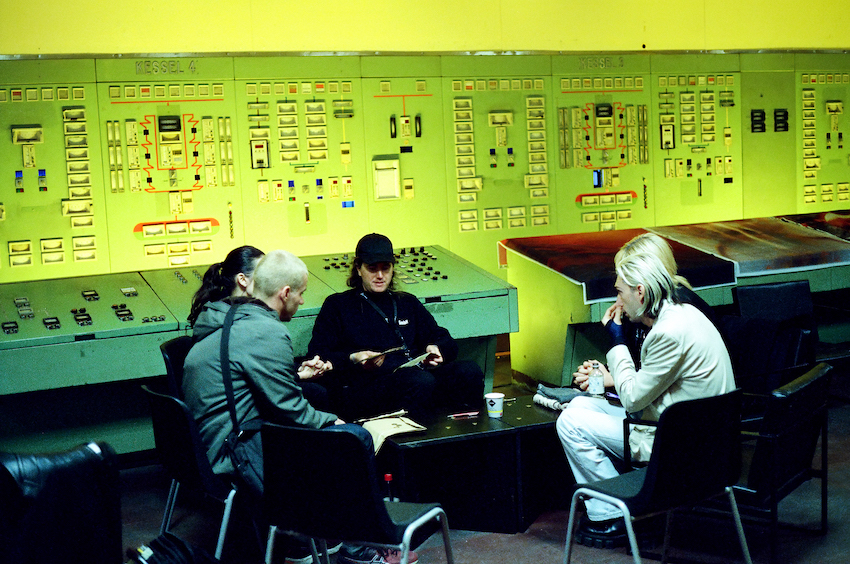 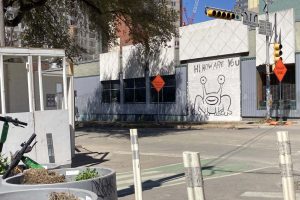 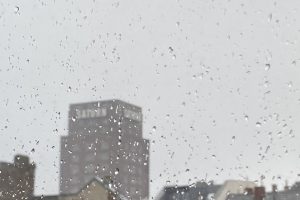 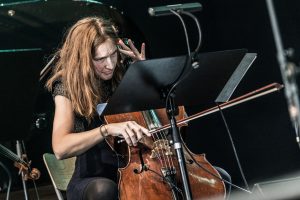 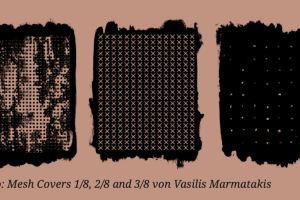